Ekoda High School (江古田高等学校 ,Ekoda Kōtō Gakkō?), often shortened to 江古田高校 (Ekoda Kōkō) is a fictional high school appearing in the franchises 100% Tantei Monogatari, Magic Kaito, Yaiba[1] and briefly in the Anime of Detective Conan, as well as its baseball team appearing as antagonists in 3rd Base 4th.

Ekoda High School is an educational facility serving grades 10-12. It's affiliated with the (so far unnamed) junior high school from Yaiba by having at least three of its graduates - Sayaka Mine, Keiko Momoi and Keiko's friend - in its second year.[1] The real Toshima Ward and the fictional district of Yaoya also seem to be part of their catchment area, considering Kaito Kuroba and Aoko Nakamori live in the first in the Manga of Magic Kaito and Sayaka Mine is living in the latter.

Their uniforms consist of regular gray, black or navy blue Gakuran for the boys and the typical Sailor fuku for girls, with variants in dark blue for the winter uniform and a white blouse, both complemented with a blue pleated skirt and a red or green ribbon. In its Yaiba incarnation, the uniforms are less like Sailor fuku, consisting of a short gray jacket over a white buttoned blouse with a gray middle and a white collar, complemented with a black bowtie and a gray pleated skirt in the Manga.[1]

The layout of the school changed over time, from series to series and between each adaption into different media. Despite this, each incarnation has some places of interest in common.

Used during a painting lecture, Sayaka Mine laughs about Keiko Momoi who accidentally got some color in her face.[1]

Sayaka Mine wins a volleyball match against another class here.[1]

Keiko Momoi seemingly had an encounter with a ghost in there when she was studying until late evening.[2]

Akako Koizumi tries to warn Kaito Kuroba from proceeding with his planned theft as Kaitou Kid later that night, since she had a premonition of him finally getting caught.[3][4]

Room of Class 2-A

The room of the class attended by Sayaka Mine, as well as Keiko Momoi in Yaiba.

Room of Class 2-B

The room of the class attended by Akako Koizumi, Aoko Nakamori, Fujie, Kaito Kuroba, Momoko Aoyama, Saguru Hakuba and Yamada, as well as by Keiko Momoi and her friend in Magic Kaito. Erika Konno is the mathematics teacher of the class and Keiji Aso their biology teacher.

The room of the class attended by Aoko Nakamori in Yaiba.

Akako is a witch having red and black magic at her disposal, who attends class 2-B.

Aoko is the daughter of a police inspector, attending class 2-B in Magic Kaito and class 2-F in Yaiba. At the beginning of the Magic Kaito Manga, she sits on the second place from the left in the fourth row, to the right of Kaito Kuroba and close to the window. Later on, their joint position in class seems to shift more to the center.

The insufferable leader of the baseball club of Ekoda High School. His real name and class are unknown.

Fujie is a boy with low self-esteem who has a crush on Akako Koizumi. He probably attends the same class as her, 2-B.

Kaito is the son of a world-famous magician and the civilian identity of Kaitou Kid, attending class 2-B. At the beginning of the Magic Kaito Manga, he sits on the furthest section to the left in the fourth row, right next to the window, with Aoko Nakamori to his right. Later on, their joint position in class seems to shift more to the center.

Keiko is attending class 2-B in Magic Kaito and class 2-A in Yaiba. In the Yaiba Manga, she sits somewhere in the fourth row, to the left of Sayaka Mine.

Keiko's friend seems to attend class 2-A in Yaiba.

Kyoko is a girl who gave Kaito Kuroba chocolate during Valentine's Day. She probably attends the same class as him, which is 2-B.

Mamiko is a girl who gave Kaito Kuroba chocolate during Valentine's Day. She probably attends the same class as him, which is 2-B.

Momoko is a high school detective who inherited her father's agency, despite still being a student and attending class 2-B.

Saguru is the son of the Tokyo Metropolitan Police's Superintendent General, attending class 2-B.

Sayaka is the only daughter of a renowned Kendoka family, attending class 2-A. In the Yaiba Manga, she sits somewhere in the fourth row, to the right of Keiko Momoi.

A student from class 2-B who is used as a distraction by Kaito Kuroba by disguising him as himself.

Erika is the teacher of class 2-B, as well as in charge of the mathematics education.

The new biology teacher for the second year classes who is adored by the female students in Magic Kaito.

An unnamed teacher who is in charge of the English lesson of class 2-A in Yaiba.

After his aerial battle against Yaiba Kurogane as Kaitou Kid the night before, Kaito Kuroba wearily sits at his place in the classroom, with Aoko Nakamori pushing him to go to P.E. - with Kendo being on the schedule for the boys today. He just replies that he doesn't want to have anything to do with it anymore.

Kaitou Kid is reading about his newest announcement in the classroom, when Aoko Nakamori suddenly interrupts him, wads up his newspaper and tells him about her birthday that's today, inviting him to the party tonight.

Kaito Kuroba, Aoko Nakamori and Akako Koizumi are talking about the Red Tear Kaitou Kid aims to steal in their classroom, with the Akako warning Kaito about this ruby, since Red Tear is said to be cursed. 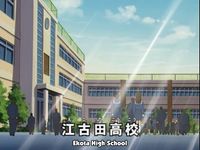 Kaito Kuroba reads the morning newspapers in the classroom about Kaitou Kid's newest announcement, which angers Aoko Nakamori. She afterwards talks with Keiko Momoi and Akako Koizumi about the clock tower across the train station he targets, with Akako warning him to better refrain from this theft, since she had a premonition of Shinichi Kudo arriving.

Aoko Nakamori explains to Kaito Kuroba in their classroom that she has won a tour to Tokyo Tower, inviting him and with Akako Koizumi joining in.

Kaito Kuroba ponders about Kaitou Corbeau's coin and his challenge in the classroom, with Aoko Nakamori and Akako Koizumi unwittingly giving him hints.

Saguru Hakuba mentions the Ekoda High's rules and explains that motorbikes are not allowed on the school grounds.

After a timeskip of three years, Sayaka Mine is now attending the second year of high school in class 2-A, meeting her classmates Keiko Momoi and their shared friend on the way to it, talking about the relationship of their fellow students Kaito Kuroba and Aoko Nakamori, proving that Sayaka goes to an alternate version of Ekoda High School. Sayaka can't concentrate during her lessons, because she misses Yaiba Kurogane and the adventures she had with him, making her cry. Just when Keiko tries to consolate her, Yaiba crashes through the classroom window on his new sword Kusanagi, asking her whether she wants to come along with him, to which she agrees, leaving the school behind.

The last moments of the epilogue from Chapter 255 (Yaiba Volume 24, Chapter 12) are recreated as a cutscene after the finale, with Sayaka Mine now attending Ekoda High School and Yaiba Kurogane crashing through the window of her classroom, asking her to join him on new adventures, to which she agrees before the credits roll. 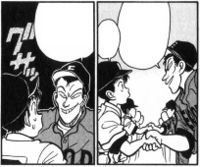 The first rival team Shigeo Nagashima and his friends have to play against is the baseball club of Ekoda High School, led by an obnoxious captain who teases Shigeo because of his lack of skills, despite sharing the name with a famous baseball player. They are beaten after Shigeo acquired his new, magical baseball bat.

As part of a special event during June 21st - July 3rd, 2015, to celebrate the birthday of Gosho Aoyama, Kaito Kuroba and Saguru Hakuba were available as part of the "Ekoda High School Study Run" (江古田高校学ラン ,Ekoda Kōkō-Gaku Run?) in "Mystery Town". 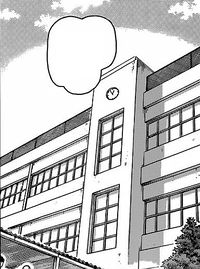 Ekoda High School in the Manga of Magic Kaito.

This incarnation of Ekoda High School is very probably based on the main building (#3) on the Ekoda Campus of Musashi University, right next to the Ekoda Campus (fine arts) of Nihon University, where Gosho Aoyama and Yutaka Abe (a past mentor and current assistant of his) studied and lived - also not far away from Ekoda Station, which was close to Gosho's apartment.[5][6]

Additionally, building #3 itself was a high school once and what is the Ekoda Campus of Nihon today once housed another high school associated with the university, called Ekoda High School (日本大学江古田高等学校 ,Nihon Daigaku Ekoda Kōtō Gakkō?)(jp) (also shortended to 江古田高校 (Ekoda Kōkō), like the school in the Manga), which closed in 1976 and is also used as a university building today.[7] All of the mentioned campuses and buildings are located in the adjacent districts of Asahigaoka(jp) and Toyotamakami(jp) in Nerima Ward. Ekoda High School was first used by Yutaka Abe in 100% Tantei Monogatari in 1986 (set in the same universe as Magic Kaito and made with the assistance of Aoyama).

Kaito Kuroba and Aoko Nakamori also regularly take a train ride on their way from school on the Seibu Ikebukuro Line, leaving at Ikebukuro Station, which heavily implies for both to live in the Toshima Ward.[8] This is outright confirmed with the Nakamori family, whose house is located somewhere in Toshima.[9] The Ikebukuro and Ekoda Stations are both on the Seibu Ikebukuro Line, only separated by two other train stations and a track distance of 4.3 kilometres (~2.7 miles).

All of this gets additional proof by Yaiba Kurogane and Sayaka Mine flying away on his new magical sword, the Kusanagi, with an aerial shot of Ekoda High School and its surroundings visible from high above, which seem to be modeled after a view from the north to the old Ekoda Station building, the adjacent sections of Seibu Ikebukuro Line and the districts around them, which would roughly place the school building seen here around the district of Sakae Town(jp) in the far southeastern corner of Nerima Ward, close to the border it shares with Toshima.[1] 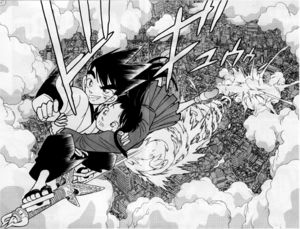 Yaiba and Sayaka leaving Ekoda High School, with its surroundings visible far below.

The Ekoda High School in Magic Kaito 1412 is based almost one to one on the real Tokyo Metropolitan Senior High School of Fine Arts, Performing Arts and Classical Music (東京都立総合芸術高等学校 ,Tōkyō-to Tachi Sōgō Geijutsu Kōtō Gakkō?) in the Tomihisa District of Shinjuku Ward in Tokyo; even the infrastructure and architecture of the surrounding area was transitioned in painstaking detail. Perhaps one of the setting designers immortalized his former fine arts high school here as one of the series' main locations.