The Mouri Detective Agency above Café Poirot and below the Mouri's apartment, with Iroha Sushi to the right.

The Mouri Detective Agency (毛利探偵事務所 ,Mōri Tantei Jimusho?) is a private detective agency run by Kogoro Mouri, which serves as one of the central settings in the Detective Conan franchise. According to the manga, it is on the first floor of a building in the fifth block of the Beika Town district (米花町５丁目 ,Beika-chō 5-chōme?)[1], in the (fictonal) Beika Ward (Beika City in the extended canon) of Tokyo. According to episode 451, it is located at lot number 39 (39番地 ,39-banchi?), but this information is non-canon.

Café Poirot is located right below it, on the ground floor. On the floor above it the associated apartment of Kogoro and his daughter Ran Mouri can be found, in which Shinichi Kudo has also been living since his involuntary rejuvenation to Conan Edogawa, in order to have a possible source of information about the Black Organization.

It's shown several times in the manga that the Mouri Detective Agency is close to Tokyo Tower. Later on, its specified to be located somewhere inside a radius of less than 1.34 kilometres (~0.83 miles) around the Shorodo right next to it, with the equally fictional districts of Buroku and Sutan inbetween.[2] The location of those and the part of Beika the detective agency is in would, in real life, somewhere be in an area that partly encompasses the districts of Mita, the Shiba area, Kaigan, Atago, the Shinbashi area, Toranomon, Akasaka, Roppongi and Azabu, which are all inside the Minato Ward, just like the tower itself.

The building used as the filming location for the Mouri Detective Agency is the "Teito Building" in real life, located at number 2-4 of the third block in Uchi-Kanda district in the Chiyoda Ward of Tokyo. Coincidentally, it seemed to be the home of a law office in real life once (and a tax consulting firm nowadays) and, like its manga counterpart, is relatively close to Tokyo Tower. 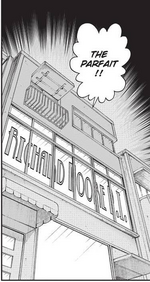 In the official English manga releases, the sign on the windows is localized as "Richard Moore P.I."[3]