Aoko has been Kaito's best friend ever since they were young children, much like Ran and Shinichi in Detective Conan. Aoko currently attends Ekoda High School as a second-year student in class 2-B along with Kaito, Keiko, Akako, and Saguru. Aoko dislikes the Kaitou Kid for making a mockery of her father, Ginzo Nakamori, but is probably unaware that Kid is actually her best friend in disguise. (This information may not be true; however, many fans speculate this as Aoko is quite clever and she used to drop a sentence which is believed to doubt Kaito's true feelings, implying her concerns that he (Kaito) was always nice and gentle but something was off in him.) In both manga and anime, Aoko's family is canonly presented without her mother's appearance. This leads fans to believe that she might have died. 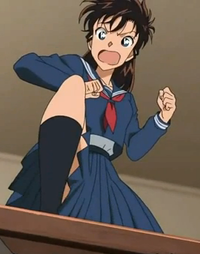 Aoko has a temperamental personality, sweet and gentle at one moment, then boisterous and fiery at the next. Like her father, she is impulsive, easily riled up, and often shouts. Kaito and Kaitou Kid in particular are often the trigger for bouts of loud, violent displays. She also has a mischievous side, using Kaito's weakness for fish to get revenge on him for harassing her.

Aoko has a tendency to refer to herself in the third person, which is considered 'cutesy' and childish in Japan. She is also shown to dress rather childishly, in skirts and cardigans when she's not in her school uniform.

Aoko is shown to be very intelligent. However, she may also have a rather low self-esteem. Once, to prove to her father that Kaito wasn't the Kid, she asked him out on a date on the day of a Kid heist. Kaito, taken aback, snaps "Why would I go out with an ugly girl like you?" to which she tearfully replies "I know...but please!"[2]

Aoko does not like being alone; she blames Kaitou Kid for stealing her father from her because she wishes her dad was at home more instead of chasing Kaitou Kid.

Kaito and Aoko Nakamori have been best friends since they were little and first met at the clock tower. They are portrayed as a similar pairing to Shinichi Kudo and Ran Mouri (including how the characters are drawn), except much sillier. Kaito often teases Aoko by flipping her skirt. However, it has been seen that Kaito is quite protective of Aoko and doesn't appear to want her to go on a date with Saguru Hakuba. Aoko was somewhat suspicious that Kaito was actually Kaitou Kid, and in order to prove his innocence, she brought him along to a movie when a heist had been scheduled. She handcuffed him to the seat, but Kaito managed to escape and pull off the heist, thus veering Aoko's suspicions away from him. Although neither has admitted it as of yet, it is shown that the two have feelings for each other.

In the last chapter of Yaiba a scene set after a three years time skip has Keiko Momoi telling Sayaka Mine that Kaito and Aoko are a couple now, while Keiko's friend confirms having seen them together.

Prior to the heist in Volume 3, Chapter 3, Hakuba seems to flirt with Aoko after Kaito turns down Aoko's offer to go to the Prince Prince concert. Saguru and Kaito then make a bet that if Saguru manages to catch Kid then Saguru will go to the concert with Aoko, and if he fails to capture the thief, Kaito will go instead. When interviewed before the heist, Saguru notes "Tonight's battle has a special meaning to me".[3] Although initially excited to have Saguru want to go to the concert with her, Aoko during the actual heist seems to want Saguru to fail so that she can go to the concert with Kaito instead. This relationship has not been touched upon much since then because of Saguru's limited appearances in Magic Kaito and Detective Conan.

Aoko hits Kaito with a mop.

Aoko has been friends with Kaito Kuroba since they were both small children.[4] However, they frequently bicker and fight; she seems to be the target of many of Kaito's pranks, to which she retaliates by attempting to bludgeon him with whatever she can get her hands on (often a mop).[5]

Aoko hates the Kaitou Kid for humiliating her father, Ginzo Nakamori. This is partly why Kaito has to go to such lengths to keep his identity hidden from her. However, Kaito has come under suspicion of being the Kaitou Kid several times. In one instance, Aoko went to great lengths to prove Kaito innocent: she asked him out on the day the heist was supposed to take place, and then during the actual time of the heist she handcuffed Kaito to her. Kaito, however, was able to escape and use a dummy to fool Aoko into thinking that he had been with her the entire time.

Aoko frequently attends Kaitou Kid heists, similar to how Ran Mouri attends many of her father's mystery cases. Kaito has not had to prove his 'innocence' to her recently, which suggests that she now 'trusts' him.