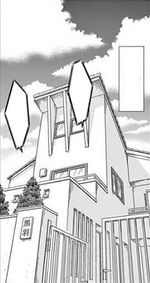 The Kuroba residence in the Manga of Magic Kaito.

The Kuroba residence in Episode 1 of the Magic Kaito TV Specials.

The Kuroba residence in Magic Kaito 1412.

The Kuroba Residence is a single-family house inhabited by Kaito Kuroba and his mother Chikage Kuroba at times, located in the Toshima Ward of Tokyo, probably in or somewhere close to Ikebukuro. It also contains the base of operations of Kaitou Kid in the form of a secret room behind a painting.[1][2] It's in the catchment area of Ekoda High School, a fictional building somewhere in the Ekoda Area of Tokyo.

This room is hidden behind a portrait of Toichi Kuroba in the living room on the second floor.

Aoko Nakamori meets with Chikage Kuroba in here to ask her about her son Kaito Kuroba's biggest weakness, which she tells her: Fish. Kaito's also having a discussion with his mother during Midnight Crow about Harry Nezu and Kaitou Corbeau.

Kid vs Conan: Teleportation Under the Moonlight (MK1412: 21)