After their great clash, Yaiba Kurogane and Takeshi Onimaru continue their respective intensive trainings. While Yaiba tries to heighten his senses by practicing with a blindfold, Takeshi starts to use the Fujin-ken, the sword of the wind god, in the mysterious hidden cellar of his home.

After four days of not coming up once, he has changed - transformed by the magic of the sword, enhanced by his anger, into a horned humanoid being, an Oni...

Yaiba Kurogane interrupts his training to go back to middle school with Sayaka Mine for once, where he is instantly cheerfully greeted by his fellow students. The joy doesn't last for long though, since the demonically possessed Takeshi Onimaru made his way back to school with his Fujin-ken in tow, too, chasing away the teacher of Yaiba's and Sayaka's class, Mr. Sudou. Yaiba tries to stop the new Onimaru, but overwhelmingly gets knocked down a peg by his new powers and the magic of the sword.

In the meantime, an old man on a mountain notices a sword he is watching over flashing up, deducing that the demon has returned...

The Other Demon Sword

The battle between Yaiba Kurogane and Takeshi Onimaru continues unchanged, with the former not having a bit of a chance. Just when Onimaru tries to land a fatal blow on him, Yaiba's pet vulture Shonosuke appears, while Sayaka Mine gets dragged away by Keiko Momoi.

Back at the Mine residence, Kenjuro Kurogane visits in time to tell the kids about another sword that you need to stop someone with the sword of the wind god: Raijin-ken, the sword of the thunder god. Yaiba and his pets kidnap Sayaka in the middle of the night, still in her pajamas, and take her to Mount Tengu, where the Raijin-ken is said to be kept by Miyamoto Musashi.

Yaiba Kurogane and his friends reach Mount Tengu, where they quickly encounter the legendary Musashi Miyamoto and follow him to his tree house. Sayaka Mine spots the Raijin-ken outside his house and tries to pull it out of the ground Excalibur-style, but gets electrocuted because she isn't the one destined to wield it. Musashi is sure that no one of them is, making him bewildered when Yaiba pulls out the sword without any effort, making him the prophesied "Legendary Samurai". But then the boy gets possessed by the god dwelling inside that blade, too.

Musashi Miyamoto fights the Raijin-possessed Yaiba Kurogane, who destroys his tree house, and manages to stop him by smacking him on the back of the head with a tree branch. He afterwards convinces Yaiba and even Sayaka and their pets to do some "training", which turns out to be just him exploiting the kids as workers to build him a new home.

Takeshi Onimaru meanwhile notices his sword reacting, Raijin's arm returning to the statue and tricking his grandfather to giving an explanation that someone plugged out the sword and the god briefly returned.

Takeshi Onimaru left his home and travels to Mount Fuji to find a sealed-off cave where the statues of eight allegedly powerful demons are hidden, which he summons by means of animal sacrifices.

Yaiba Kurogane on the other hand tries to begin his training under Musashi Miyamoto, who's still tricking him into doing useless things in the hope of finally taking his mentoring seriously (and to get some grilled fish). Onimaru concurrently ritually sacrifices a frog to awaken the first of the demons: The toad-like warrior Gerozaimon Geroda.

Musashi Miyamoto wants Yaiba Kurogane to train his balancing by swiftly walking across water lilies without falling into the pond, which is more difficult than the young boy expected. Takeshi Onimaru creates an army of horned Oni and sends them out under the command of Gerozaimon Geroda to the pond Yaiba and his friends are at, where the frog man grabs Yaiba underwater to drown him, while his friends get captured by the Onis.

Takeshi Onimaru makes his way through the Shinjuku Ward of Tokyo to finally reach the National Diet Building, where he hypnotizes the Diet members to be under his influence. He plans to recreate the building in his image as Onimaru Castle.

Yaiba Kurogane and his friends still battle Gerozaimon Geroda and his minions at the pond at Mount Tengu. One of the Oni accidentally grabs Sayaka Mine's chest, causing her to beat him up, while another Oni takes the Raijin-ken and gets electrocuted by it, throwing the blade into the water where Yaiba catches it, which makes it possible for him to finally escape Gerozaimon's clutches. The frog man follows the group, but when he tries to attack them with his long tongue, Yaiba grabs it and ties it around a tree at the other side of a deep canyon, effectively creating a bridge he and his friends can cross, leaving Gerozaimon behind.

Musashi Miyamoto and Yaiba Kurogane are arguing about who's going to Tokyo to sound out the location, ending with both flying there on the back of Shonosuke. Gerozaimon Geroda is still caught over the canyon, but his minions have a plan to free him, which just causes his fall, temporarily knocking him out.

Musashi and Yaiba are witnessing the now completed Onimaru Castle, with Yaiba urging to attack Onimaru, who notices because his Fujin-ken reacting to their presence. Yaiba draws out the Raijin-ken, getting possessed by the god again, which forces Musashi to knock him out and flee with him, since they wouldn't stand a single chance against Onimaru and his new army.

When they finally return to Musashi's house, Sayaka Mine and Kagetora are gone - kidnapped by Gerozaimon and his minions.

I Won't Forgive Them!

Yaiba, Musashi and Shonosuke follow Gerozaimon and his minions to Lake Suribachi, where he took Sayaka and Kagetora to, but they are actually doing very fine - Sayaka cooked some food for the nefarious group, which they highly appreciate.

When Yaiba arrives he instantly gets attacked, leading to an underwater battle between him and the Oni minions, where he grimaces to make them laugh, freeing him from their grasp while the others are fighting at the waterside. He joins them in their battle and faces Gerozaimon personally, again trying to use the Raijin-ken against him - and again getting possessed by the god of thunder, endangering everyone around him.

Settings appearing in this volume:

Takeshi Onimaru forces his entry into the Kokkai-gijidō, also known as the National Diet Building of Japan in Nagata Town in the Chiyoda Ward of Tokyo to take over the government of the country and remodel the building in his image of a demon castle, which he uses throughout chapter 17-61 (Yaiba Volume 2, Chapter 8-Yaiba Volume 7, Chapter 2). This technically makes Onimaru's castle a real building, as this, it's one of the best places to pinpoint the location of the fictional Yaoya District and the mansion of the Mine family, since it's pretty close to the castle.

Takeshi Onimaru is awakening the Eight Demons in a cave at Mount Fuji, which is a real volcano on the boundary between the Prefectures of Shizuoka and Yamanashi and within sight of Tokyo.

Mount Tengu from chapter 13-24 (Yaiba Volume 2, Chapter 4-Yaiba Volume 3, Chapter 5) Yaiba Kurogane, Kagetora and Shonosuke are abducting Sayaka Mine to and on which Miyamoto Musashi has been living for the last couple of centuries is a real mountain on the border of the cities Chino and Koumi in Nagano Prefecture. 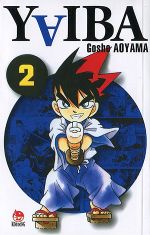