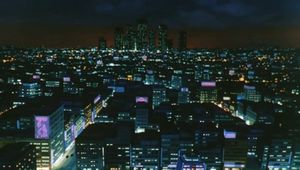 Beika Ward (米花区 ,Beika-ku?)[1] (Beika City (米花市 ,Beika-shi?) in the expanded universe[2]) is a fictional ward of Tokyo or a city inside the Greater Tokyo Area. It's the main setting of Detective Conan and also appeared in the Zero's Tea Time, Magic Kaito: Kid the Phantom Thief Specials, Magic Kaito 1412, Hanzawa the Criminal, as well as in Detective George's Mini-Mini Big Strategy and Play It Again. 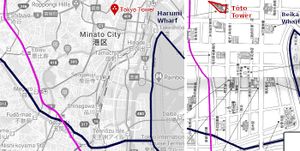 The map from Super Digest Book 10+ seems to equate Beika with Minato.

Tokyo actually consists of 23 wards of this type. Although this one is fictional, some buildings and places in it are based on existing structures, which are mixed with fictional locations, and canon statements about its relative position are repeatedly made in the Manga.[3]

Beika seems to be around 4 kilometres (~2.5 miles) to the south-east of Shinjuku.[4] Conan Edogawa and the Detective Boys also took a ride starting from a bus stop at Beika Park on the real To06 bus line (都06) by Toei Bus to Tokyo Tower, which leads from Shibuya Station in Shibuya through Minato, with its final destination at Shimbashi Station.[5] They also took a detour on the way to Professor Hiroshi Agasa's house to the real Ebisu Bridge on the border between Shibuya and Minato, implying it to be close to Beika Town.[6] Masumi Sera's skyscraper hotel shares a position with the Daikanyama Address Building, which is also close to Ebisu.[7]

It's shown that the Mouri Detective Agency is located somewhere inside a radius of less than 1.34 kilometres (~0.83 miles) around the Shorodo right next to the Tokyo Tower, with Buroku and Sutan inbetween.[8] This would, in real life, partly encompass the districts of Mita, the Shiba area, Kaigan, Atago, the Shinbashi area, Toranomon, Akasaka, Roppongi and the area of Azabu, which are all in Minato. A Toei Cinema in Roppongi is also visited by Conan, Ran, Masumi, Sonoko and Makoto in one chapter.[9]

Beika Station is on the Shounan-Shinjuku Line, right after a real section of the tracks before Gotanda Station, close to the border of Minato and Shinagawa.[10] Shinagawa Station (which, despite its name, is located in Minato) also seems to be close to Haido.[11]

Conan Edogawa's and Kaitou Kid's first meeting on the roof of the Haido City Hotel is shown to be right next to the real Shiroyama Trust Tower, with Tokyo Tower right behind it, placing the hotel on the location of the ANA Intercontinental Tokyo Hotel in the Akasaka District of Minato.[12] The 4th block of Haido is firmly located between the Tokyo Metropolitan Police Department and Yotsuya Station.[11] The Haido Port and its surroundings, on the other hand, seem to be identical to Minato's Hinode Pier.[13]

This would make the Beika Ward largely identical to Minato Ward, overlapping with small parts of Shibuya, Chiyoda and Shinagawa bordering on it. This approach is also taken by the map from the Super Digest Book. Despite this, Minato is still its own, distinct ward in the world of Conan.

Beika Town (米花町 ,Beika-chō?) is where Conan Edogawa, Ran Mouri, Kogoro Mouri and a majority of the other main characters live. It consists of at least seven blocks and a section of the river Teimuzu flows through this town. Like the Beika Ward itself, it is named after London's Baker Street, which is the place Sherlock Holmes lived at.

Buroku Town (須単町 ,Buroku-chō?) is a town in or close to Beika Ward, adjacent to Beika Town and Sutan Town and close to Tokyo Tower. Buroku and the latter are named after London's Stamford Brook, which was featured in. It was one of the two possible locations Eri Kisaki was held at during the Eri Kisaki Abduction Case.

Haido Town (杯戸町 ,Haido-chō?) is a fictional district in the equally fictional Beika Ward (in Beika City in the extended canon) adjacent to Beika Town and is named after London's Hyde Park. It consists of at least four blocks and is the place where Makoto Kyogoku and Hina Wada live in. A section of the river Teimuzu also flows through this town. In the manga of Detective Conan, it's said to be between the districts of Kasumigaseki and Yotsuya. In Magic Kaito 1412, it seems to be identical to Roppongi, while in the Magic Kaito TV Specials, it's implied to be close to Kōenji-Minami. The latter two are non-canon, though. 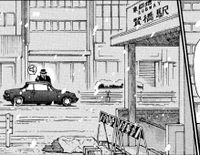 Kenbashi Town (賢橋町 ,Kenbashi-chō?) is a town in or close to Beika Ward and is named after the English city of Cambridge ("Cam" in Katakana is "Ken" (ケン), "bashi" is Japanese for "bridge"). Known locations so far are the Tohto Subway Kenbashi Station from the Footsteps of Darkness case, the Ito Residence from the Heiji Hattori Desperate Situation case, and the Kenbashi branch of Tohto Bank. It consists of at least five blocks, with an elementary school located in its 5th block.

The extended canon added the Kenbashi Tunnel to it in The Kidnapper's Disappearing Getaway Car.

A street in Okuho Town

Okuho Town (奥穂町 ,Okuho-chō?) is a town in or close to Beika Ward, consisting of at least three blocks. Since Hiroshi Agasa attended middle school there, it's likely to be a part of the ward, though. Its name seems to be a play on London's Oxford Street, which appeared in the Sherlock Holmes canon, too. Known locations from the manga so far are the Okuho Middle School and the Okuho Post Office.

The extended canon added the Okuho Police Station (Intersection of Fear), Kita-Okuho Police Station (Detective Takagi On the Run in Handcuffs), Lake Okuho (The Detective Boys Become Models) and the Okuho Race Course (Thoroughbred Kidnapping Case) to it. An Okuho Station is also mentioned in non-manga stories a couple of times, which seems to be part of the Tohto Line.

Rizen Town (梨善町 ,Rizen-chō?) is a town in or close to Beika Ward. Rizen is probably named after London's Regent Street, which was also featured in the Sherlock Holmes canon. It was first mentioned during the Red Horse Case.

Sutan Town (須単町 ,Sutan-chō?) is a town in or close to the Beika Ward, adjacent to Beika Town and Buroku Town and close to Tokyo Tower. Sutan and the latter are named after London's Stamford Brook. It was one of the two possible locations Eri Kisaki was held at during the Eri Kisaki Abduction Case.

Kite-flying at the Teimuzu River

The Teimuzu River (堤無津川 ,Teimuzu-gawa?) flows through the Beika Ward. Its name is based on a Japanese transcription of the English name of the Thames in London, but its appearance is based on the Arakawa in at least one case.

Toriya Town (鳥矢町 ,Toriya-chō?) is a town in or close to the Beika Ward, adjacent to Beika Town and Haido Town and consists of at least two blocks. It is named after London's Victoria Station. Known places so far are the Toriya Bridge, the ruins of Toriya Castle, the Toriya Flood Gates and the Toriya Police Station. A section of the river Teimuzu also flows through this town. Furthermore, it the home town of Tatsuhito, Kaneyo and Toji Funemoto.

Beika East Town (米花東町 ,Beika-Azuma-chō?) seems to be another fictional district in Beika City. It's seemingly only been mentioned in the anime so far, making it non-canon to the world of the manga. It's also unclear if its supposed to be the same district as Higashi-Beika, or distinct from it.

Beika South Town (米花南町 ,Beika-Minami-chō?) seems to be another fictional district in Beika City. It's seemingly only been mentioned once, in the episode The Man Obstructed by the Steel Frame of the anime so far, making it non-canon to the world of the manga.

Beika-Ōmachi Town (米花大町 ,Beika-Ōmachi-chō?) seems to be another fictional district in Beika City. Its only been seen once, on a bus plan in The Mysterious Woman With Amnesia Case from the anime so far, likely making it non-canon to the world of the manga.

Birinmon Town (美林門町 ,Birinmon-chō?) is a fictional district in Tokyo along the Teimuzu River seen in the anime episode "Follow Them! Detective Taxi". It may be a fictional counterpart to the Tsujiki district and its famous fish market, while its name probably is derived from London's Billingsgate Ward ("Birin" = "Billing", "mon" = "gate"), which also got a famous fish market in front of the Thames River, which was the inspiration for the Teimuzu. Birinmon Bridge is also located here. It is probably a non-canon setting for the manga.

Haido North Town (杯戸北町 ?) seems to be another fictional district in Beika City. It's seemingly only been mentioned once, in the episode Turning Point on a Driving Date of the anime so far, making it non-canon to the world of the manga.

East Beika Town (東米花町 ,Higashi-Beika-chō?) seems to be another fictional district in Beika City. It's seemingly only been mentioned twice in the anime so far, making it non-canon to the world of the manga. It's also unclear if its supposed to be the same district as Beika-Azuma, or distinct from it.

West Teitan Town (西帝丹町 ,Nishi-Teitan-chō?) is a fictional district of Tokyo, probably supposed to be in Beika City. Its subway station seemingly is the nearest one to the subway station next to the studios of Nichiuri TV. It only appeared in The Weather Girl Kidnapping Case from the anime so far, likely making it non-canon for the manga.

Soho Town (双宝町 ,Sōhō-chō?) is a fictional district in or close to the equally fictional Beika Ward, adjacent to Beika Town, and only appeared in movie 5, Countdown to Heaven, as the district Yoshiaki Hara lived in, as well as in the 3D special Conan vs. Kid - Shikkoku no Sniper, probably making it non-canon to the manga. Its name could be an allusion to London's area of Soho.