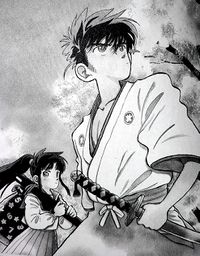 Cover artwork for Play It Again.

Play It Again (プレイ・イット・アゲイン ,Purei Itto Agein?) (literally "Play it again") is a short story by Gosho Aoyama which was published in May 1988. It revolves around the old kendo master Sanjuro Tsurugi who is rejuvenated by the blossoms of a magical cherry tree and experiences parts of his youth from a new perspective in the form of the high school student Sanjuro Sakura. The story was the prototype for Gosho's series Yaiba[1] and prominently features the topic of rejuvination, which he also used for Magic Kaito and Detective Conan.

An old kendo master named Sanjuro Tsurugi gets a visit by his granddaughter, who's also his student, 17-year-old Michiko Tsurugi. He would like to come to parents' day at school to watch how she's doing in class, but she is against the idea since she considers him insufferable and because he always carries his kendo sword around with him. Sanjuro then reprimands her for this behavior and informs her about the old cherry tree that stands in this garden and was planted when he was born and still proudly bears its blossoms today. She should take an example from it, being as strong as the flowers and the trees. Michiko reacts to this wisdom in an angered manner, which the master uses as an invitation to fight with her. While he is still mocking her because no one has ever "hit Sanjuro the demon", she suddenly runs off. He follows her, always in a circle around the cherry tree, until he can't breathe anymore. Just as he sinks to his knees exhausted and realizes that even a grandmaster has no hold over his own old age, Michiko approaches from behind and hits him with a kendo stick. Sanjuro cannot cope with the fact that he was defeated by a girl who makes fun of him since he is "80 years old already". 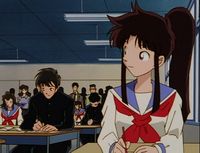 Michiko is glad that her grandfather did not follow her.

Michiko departs for school, while Sanjuro wearily lies down in the shade of the cherry tree and begins a monologue with it about how much he envies it that it's still full of strength and beauty, despite being just as old as him - and that he wishes to be young again. Sanjuro falls asleep, still lying under the tree, and is covered by its cherry blossoms.

At the same time at Michiko's high school, class has started. She watches the parents standing in the back of the classroom and is relieved to find out her grandfather is not present. Meanwhile, he wakes up under a mountain of cherry blossoms - now just as old as his granddaughter. He runs off to the school and bursts into her classroom, where he openly challenges her to a revanche battle, but nobody recognizes him, not even Michiko. Sanjuro thinks that she wants to make fun of him again at first until the teacher grabs him by the collar, gives him a lecture about causing a disruption in the middle of the lesson, and tells him to put on appropriate clothes and return to his own class. Sanjuro does not understand what is wrong with his kendo outfit and looks at himself in a mirror inside the stairwell of the school, where he realizes that he is indeed young again. He immediately puts his new youth to the test by running around the schoolyard incessantly, taking pleasure in not getting tired at all. He is observed by Michiko and her friend, and it occurs to the former that the apparently strange boy's kimono looks like that of her grandfather.

Sanjuro begins a trip through Tokyo and does everything he ever wanted to do: play baseball and bowling, as well as eating a full meal at McDonald's. 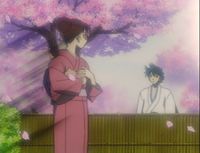 Sanjuro remembers the girl from over 60 years ago.

In a subplot only present in the anime, he then takes a ride to Beika and enters a magazine store at Beika Station, where he is about to browse through the porn magazines, which he refrains from when Ran Mouri and Sonoko Suzuki walk past him. Looking at the books, feigning innocence, he sees the book "Touson" by Mokichi Saito, which he hasn't read for ages. He opens a few pages and sees a poem about a girl with a flower comb in her hair, which reminds him of something. He takes the train to another part of this city, but at first he can hardly find his way around since the last time he was here was over 60 years ago. With the help of a signpost, he finds the way to the Beika Shrine, where no one's present. There's also no one at the back of the shrine, at the old well, but Sanjuro now remembers that she lived somewhere nearby.

Strolling around aimlessly he gets lost again, whereupon cherry blossoms fly towards him from the entrance of a property. He takes a look at the garden of the house and has another déjà vu. He finally notices the girl from back then, Harue, six decades older, with a grown-up daughter and a small granddaughter. Sanjuro recognizes her by her golden flower comb in her hair and sheds a tear, but leaves the scene again immediately after, though the old lady seems to have recognized Sanjuro for a moment.

In a scene merging this side story with the manga's plot again, he returns to the school, wondering what to do next. But first of all he wants to go to the bathroom where he overhears the conversation of three male students, led by the long-haired Tatsuya Nakadai, who are planning to assault Michiko and also talk about their grandfather, whom they rule out as a threat because he is "just a geezer". Sanjuro tells them to leave Michiko alone, easily defeating Nakadai's henchmen. Nakadai, who is also part of the kendo club, therefore takes on the matter himself and challenges Sanjuro to a fight.

When everyone has gathered in the schoolyard to watch the fight and the two face each other, Michiko cheers on Nakadai of all people, since she's oblivious about his nefarious plans for her. Sanjuro reacts so confused about Michiko's cheering that Nakadai can land a heavy blow on him. He finds himself in the infirmary, where Michiko puts a forehead bandage on him and explains that it would be wise not to mess with Nakadai, especially since she already has "a stubborn samurai" at home who doesn't know when to stop - and that she only treats him because of that exact reason. He then tells her that one day she would become a good wife for someone, with her wanting to know his name. He introduces himself as "Sanjuro Sakura" ("sakura" = "cherry blossom"), a name she just considers strange. 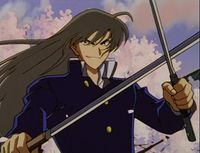 Sanjuro follows Michiko home because he has nowhere else to go, but she makes it clear to him that he shouldn't harm her, because otherwise her grandfather would destroy him. She then happily realizes that Nakadai is already waiting at the entrance to the house, challenging Sanjuro to a new fight, because the previous one in the schoolyard did not convince him. This gets Sanjuro in a dilemma, though: If he beats Nakadai, Michiko will feel sorry for him and hate Sanjuro, but should he lose, the honorless Nakadai would actually have won her heart. Nakadai suddenly draws a real sword out of his wooden stick, pushes Michiko aside, who wants to keep him from using it, and tries to attack Sanjuro with it. After several swings, he hurts him at his left shoulder. Meanwhile, Michiko is in tears, looking for her grandfather, because otherwise "Sakura" might die.

Just as "Sanjuro Sakura" finds himself in a hopeless spot by Nakadai's action of throwing knives and threatening to finish him off, Michiko discovers her grandfather's katana and throws it in Sanjuro's direction. He can now use his own technique "Hikken - Cherry Blossom Storm" while both opponents rush past each other. Nakadai's school uniform is suddenly shred to pieces and when he sinks to his knees, realizing that he has lost, it becomes apparent that Sanjuro also cut off his hair. While Nakadai mournfully leaves the property, Michiko is overjoyed that Sanjuro is fine and returns to the house to get a first aid kit for his shoulder. Sanjuro starts another monologue with the cherry tree and explains that he recognized that it was the tree who gave him a second chance at being young, but that it's enough, because he now has everything he wanted to have. He then reminisces about the entire day and the experiences he made. 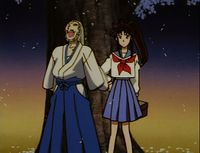 Sanjuro is amused by what his granddaughter says.

Michiko returns with the kit, with "Sakura" gone and her grandfather back in his place. She asks the old man where he was, with him replying that he only took a short walk. When she asks him about Sanjuro Sakura, her grandfather counters her question by asking whether she actually fell in love with such a good-for-nothing, to which she responds by saying that he was "much cooler than him". Sanjuro can only laugh about the irony, concluding the story.

On December 22nd, 1999, an original video animation was released based on Play It Again, being the sixth episode of Gosho Aoyama's Collection of Short Stories, which was available on VHS Volume 2. (There's only one volume of the DVD/Blu-Ray.) It is an adaption very close to the content of the original manga chapter, but expanded to include an original subplot in the middle in which Sanjuro Sakura takes a train ride to Beika to meet his childhood sweetheart, the old lady Harue, whom he recognizes by the golden comb in her hair, which is also a cross-reference to the OVA of Detective George's Mini-Mini Big Strategy, where the small detective returns the comb to her. Sanjuro also finds some traces of George Krishima's and Asami Ashikawa's emergency at the well of Beika Shrine. After finding Harue, he returns to his granddaughter's high school, where the anime seamlessly merges with the plot of the manga again.

Play It Again in Detective Conan 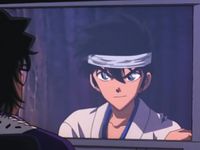 The victim of the "Missing Watch Case" (Manga: 335-337, Anime: 269-270), Eiko Idetsuki, enjoys watching her favorite movie at high volume, which is called Sanjuro Sakura, but is Play It Again in everything but name. Additionally to having the name of this short story's protagonist as its title, several dialogues directly from the manga/OVA can be read/heard during the case. The scene briefly visible on the TV seems to take place shortly before the end of the story, while Sanjuro fights Tatsuya Nakadai a second time, as he is already wearing the bandage he got from their first encounter after getting treated by Michiko Tsurugi, as well as the trees of the Tsurugi residence being visible in the background.

In the second episode of the OVA series Gosho Aoyama's Collection of Short Stories, which is a tie-in to the Detective Conan franchise, Yusaku Kudo places the original 1994 version of the short story manga volume on the place next to him after entering the cinema. In the subsequent close-up, one can spot Sanjuro Sakura on the book's cover, along with other main characters of Gosho Aoyama's short stories.