Snake (スネイク ,Suneiku?) is the primary antagonist in the Magic Kaito series. He is a codenamed agent in the criminal organization and the murderer of Toichi Kuroba, the first Kaitou Kid.

Snake revealed himself to be the one who killed Toichi Kuroba eight years before the events of Magic Kaito. It seems that Toichi's death may have been mistaken for an accident, since Kaito was shocked to learn from Jii that his father was murdered.

Snake wears a dark overcoat and fedora, similar to Gin and Vodka's. He is easily identifiable by his large horseshoe mustache.

Snake first appears in volume 3 of Magic Kaito, "Blue Birthday", where he calls the Kid "Toichi" and shoots Kaito. Only the latter's bulletproof vest saves his life. In the subsequent case, "Green Dream", Kid notes that suspicious men in gray coats are now present at all Kaitou Kid heists.

He next appears in volume 4, pursuing the blue ruby known as the "Red Tear", owned by a family of British magicians known as the Hoppers. Kaito suspects that Snake believes the gem has a good chance of being the Pandora Gem. However, since Kaito's father was trained by James Hopper, paternal grandfather of the current magician Jody Hopper, Kaito knew that the gem was actually a sort of photo album which, when illuminated, projected images of the Hopper family onto the walls. 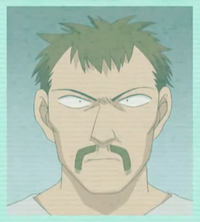 In Conan, Kid, and the Crystal Mother, 'Jackal', as he is called, appears on a train to Osaka that Queen Selizabeth is riding in, as well as Inspector Nakamori, Aoko, Kaito, Ran, and Conan. Kid has issued a notice declaring he will steal a jewel known as the Crystal Mother from the queen, which is why Inspector Nakamori was put in charge of her escort. Kaito is there because he had asked Aoko if he could come: the reason being, of course, that he plans to steal the jewel as the Kaitou Kid. Conan and Ran are present because, according to Ran, Kazuha invited her to Osaka. Jackal's intention is to steal the Crystal Mother and kill Kid, as he has "deterred us too many times". He appears to be working with an assassin named Rose, who plans to kill Queen Selizabeth.