Jubei Yagyu is a historical samurai with a mysterious past and master of the Yagyu Shin Kageryuu swordfighting style, who learned under Musashi Miyamoto, whom he still holds in high regard, which shows when Yaiba Kurogane tells him that he's just a perverted geezer, angering Jubei. He's usually calm and collected and doesn't want women to "interfere" with his path of the sword, but when he gets drunk, he transforms into a lecherous werewolf who calls himself "Yajirobe".

Jubei Yagyuu was revived by Kumo-Otoko in a similar way to Kojiro Sasaki, but he lost him.

Yaiba Kurogane and his friends first meet Jubei Yagyu in the streets of Niigata, where he challenges Kojiro Sasaki to a duel, which he wins by Kojiro's mistake of elongating his Monohoshizao sword too much, swaying to the side when standing on top of it and crashing through the roof of the Dojo in the Mine residence. Yaiba challenges Jubei too, with Musashi slowly realizing that this Jubei is, in fact, the Jubei Yagyu he taught in the past. Yaiba manages to trick Jubei, causing him to lose, with Musashi revealing himself to him, which shocks him, because he isn't the man he once was anymore, trying to commit ritual suicide, which Yaiba and Sayaka Mine can keep him from succeeding in. Yaiba asks him whether he could be his new teacher, since he thinks that he's way stronger than Musashi. He then joins Yaiba's group. 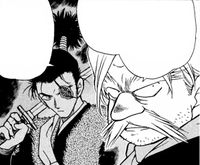 One of the hints the Detective Boys find is a café called "Terrace Jubei", seemingly named after the historical samurai.

Matasaburo Saika explains the legend behind the bear's name, which is derived from the historical samurai Jubei Yagyu, who is depicted in the background during this exactly as he looked in Yaiba.