Namako-Otoko (ナマコ男 ,Namako Otoko?) (literally "Sea Cucumber Man") is a supporting character in Gosho Aoyama's third manga series Yaiba. He also appears in Detective Conan a lot as the mobile phone strap, wallpaper and SNS avatar of Ran, as well as serving as one of the mascots of Beika Aquarium.[2]

Namako-Otoko originally is an Oni sealed away in a humanoid stone statue hidden in a cave at Mt. Fuji around 1000 years ago. After being resurrected like his seven companions by Takeshi Onimaru with the help of animal sacrifices to serve him[1], the Oni take on the form of the animal in question, which causes him to take on the form of a small sea cucumber sporting several spikes and a verbal tic to add "zura" at the end of every sentence. Despite all of this, he's not really a bad guy after all and quickly betrays Onimaru together with his two friends Kamakuri-Otoko and Hitode-Otoko, joining Yaiba's group in the process, most of the time sitting on Sayaka's shoulder or inside her collar. Following this, he tries his best to be of help in the constant battle against Takeshi Onimaru and his forces, but gets the short end of the stick most of the time. 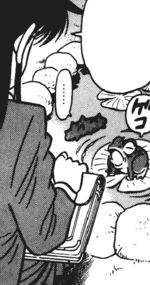 Namako and Gerozaimon in the Mine family's pond as regular animals.

With Takeshi Onimaru's demon form gone, all of his magic undone and the world at peace again, Namako-Otoko is now a regular sea cucumber living at the pond of the Mine family's mansion together with Gerozaimon Geroda and Kumo-Otoko.

Ran Mouri and Kazuha Toyama talk about the mobile phone Shinichi Kudo gifted to the former and the keychain is mentioned for the first time, but not seen yet.

Ran Mouri forgot her mobile phone in the car, which Masao Shinbo returns to her, with the Namako-Otoko keychan visible for the first time. This moment also serves as a clue in revealing the culprit in the end.

Conan Edogawa is calling Ran Mouri during the hostage situation, with Masumi Sera getting the idea to have him listen in by taking the mobile phone from Ran and putting the Namako-Otoko strap inside her flip phone, so that it doesn't completely close and finish the call.

Namako-Otoko seems to be one of the mascots of Beika Aquarium. When Ran Mouri's mobile phone gets lost, she demands a new one from Shinichi, with one of those sea cucumber straps from the aquarium attached to it, which is the same one she owns until today.

In the Anime version, an additional scene about Ran Mouri was added where she's pondering about her relationship with Shinichi Kudo. Namako-Otoko is visible as her mobile phone wallpaper during that scene.

Two of the toys next to the television Maria Higashio sleeps in front of, are stuffed animal versions of Gerozaimon Geroda and Namako-Otoko.

Ran Mouri demands of Shinichi Kudo to buy her a new mobile phone, including a "Namako-Otoko keychain", after solving the Aquarium Murder Case.