View from the roof of the fictional Haido City Hotel to the real Shiroyama Trust and Tokyo Tower.

Although this town is fictional, some buildings and places in it are based on existing structures, which are mixed with fictional locations, and canon statements about its relative position are repeatedly made in the manga.[1]

Conan Edogawa's and Kaitou Kid's first meeting on the roof of the Haido City Hotel is shown to be right next to the real Shiroyama Trust Tower, with Tokyo Tower right behind it, placing the hotel on the location of the ANA Intercontinental Tokyo Hotel in the Akasaka District of Minato Ward, close to the border of its neighboring ward Chiyoda.[2] The 4th block of Haido is firmly located between the Tokyo Metropolitan Police Department (Chiyoda) and Yotsuya Station (Shinjuku Ward, close to the borders it shares with Minato and Chiyoda).[3] The Haido Port and its surroundings, on the other hand, seem to be identical to Minato's Hinode Pier.[4] Shinagawa Station (which, despite its name, is also located in Minato) seems to be close to Haido, too.[3]

This would locate Haido Town roughly somewhere along or between the borders of the wards of Minato and Chiyoda, as well as encompassing some of the sea ports of the former.

Didn't appear and wasn't even mentioned so far, but since Haido Town has a 3rd and 4th Block, a 1st Block has to exist, too.

Didn't appear and wasn't even mentioned so far, but since Haido Town has a 3rd and 4th Block, a 2nd Block has to exist, too.

Alley next to an apartment building

One of the crime scenes from the Policewomen Serial Murder Case.

The block is located somewhere on a route between the Tokyo Metropolitan Police Department and Yotsuya Station. 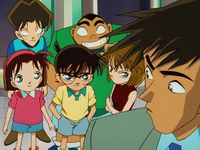 Takagi and the Detective Boys at the abandoned Haido Art Museum 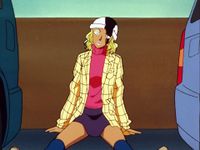 A murder happened at the parking lot of Haido Department Store

A tattoo shop that appeared in File 551.

Haido Central Hospital (杯戸中央病院 ,Haido Chūōbyōin?) was the location where the FBI held Kir while she was unconscious and the site of a showdown between the Black Organization and the FBI. Eri was operated for appendicitis there. Later, Jodie's friend, Natsuko Shibuya, was attacked in a case and stayed there a few days. The Haido Cinema building is nearby.

Haido City Hotel (杯戸シティホテル ,Haido Shiti Hoteru?) was first introduced when Kaitou Kid landed on its roof before the Black Star Heist. It appeared again in Reunion with the Black Organization where Pisco assassinated a politician and Gin and Shiho Miyano had a confrontation on the roof. The dying mystery writer spent his finals days there in The Mystery Writer Disappearance Case. The White Day party for a candy company in White Day of Betrayal was held at the hotel.

Its position is identical with that of the real ANA Intercontinental Tokyo Hotel in the manga continuity.

Haido Elementary School in the manga

While no main characters attend Haido Elementary School (杯戸小学校 ,Haido Shōgakkō?), this school plays a key role in Episode 2: Company President's Daughter Kidnapping Case. Keita Onoda and Chiaki from The Secret Played by the Diary are currently enrolled as first grade students there.

It appeared in Episode 338.

The Haido Detective Agency is the workplace of Detective Kusukawa, a former Osaka police detective. The agency appears to be well staffed, with multiple detectives working at the office. It appears in the case, Heiji Hattori's Desperate Situation (Volume 38, Files 390-393) / (Episodes 323-324).[6] 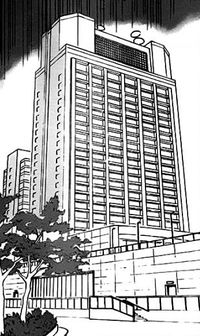 Haido Hotel in the manga

Haido Port in the manga

Haido Port appears in files 571 and 1040. In the latter, the port and its surroundings are modeled after the Hinode Pier in Minato.

Haido Shrine in the manga

The Detective Boys at Haido Station

Haido Station (杯戸駅 ,Haido-eki?) appears several times in a minor capacity during the manga and the extended canon. The Detective Boys left a train coming from the Shinjuku Ward there in the Soccer Supporter Case. The Black Organization also assaulted the station with an irritant gas in the Kir Transport Case. It seems to be subsequent to Beika Station, which probably places it on the Shōnan-Shinjuku Line in the manga continuity, too. It doesn't seem to be part of the Loop Line in the extended canon.

Haido Town Shopping Mall (杯戸町のショッピングモール ,Haido-chō no Shoppingu Mōru?) has the largest ferris wheel in Japan, over 125m tall, with 72 seats. For the ferris wheel to make one full rotation, it takes over 18 minutes (30cm per second, according to Haibara). The ferris wheel itself is better known as the place where Jinpei Matsuda died trying to defuse a bomb left by a crazed bomber. 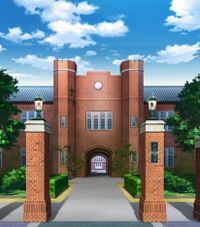 Haido University in the anime

Haido University (杯戸大学 ,Haido Daigaku?) is the fictional counterpart of Rikkyo University. It was shown on a picture in episode 834, The Man Who Died Twice, and reappeared in The Shifting Mystery of Beika City. Its existence is therefore not confirmed in the canon plot as it appeared in filler episodes. 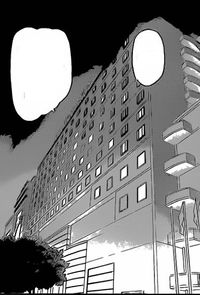 Hotel Haido Pride in the manga

Hotel Haido Pride, also transcribed as Hotel Hyde Pride, is a hotel Masumi Sera and mother stay at for a while. It first appeared in episode 785.

Located somewhere on the Tōto Line.