Trains and their tracks play important roles in getting the characters around throughout Beika City and the rest of Japan. The prominent railway company is Tohto[1] Railways (東都鉄道 ,Tōto Tetsudō?), henceforth referred to as TR, a reference to the real-life Japan Railways (JR).

The Loop Line (環状線 ,Kanjōsen?) is the main set of tracks for Beika City and was featured prominently in The Time-Bombed Skyscraper. As its name suggests, this track runs in a loop around Beika City. A majority of the stations seem to be based on the real-life Yamanote Line. In "The Missing Page" it is referred to as the Tohto[1] Line (東都線 ,Tōto-sen?).

** Not included in listing as of A Friend of Justice

The Minato Line (港線 ,Minatosen?) is a connecting line to the series' main Loop Line. It is mentioned in the non-canon case The Missing Page.

The Sakaimachi Line (境町線 ,Sakaimachisen?) is a connecting line to the series' main Loop Line. It is mentioned in the non-canon case "The Missing Page".

The Seibu Ikebukuro Line (西武池袋線 ,Seibu Ikebukuro-sen?) is a real railway line and featured in the respective manga continuities of Magic Kaito and Yaiba.

A TR train on a real segment of Shōnan-Shinjuku Line, briefly before entering Beika Station

The Shōnan-Shinjuku Line (湘南新宿ライン ,Shōnan shinjuku rain?) is a real railway line and a part of the Yamanote Line. Beika Station is confirmed to be a part of it during Haibara's Lost Phone Strap Case, located somewhere between Shinjuku and Nishi-Ōi Stations. A panel from the manga shows the train the Detective Boys boarded entering Beika Station on a real segment between Ebisu Station and Gotanda Station (which isn't part of the line in real life).

Beika Station (米花駅 ,Beika-eki?) is the main train station frequented by the cast of Detective Conan and is one of the many stations located along the Loop Line in the extended canon, while being part of the real Shōnan-Shinjuku Line in the manga. This station played a key role in The Time-Bombed Skyscraper and appeared in Play It Again, too. It seems to be modeled in appearance after the real-life Shin-Ōkubo Station in the Shinjuku Ward of Tokyo.[3]

Amuro and the Detective Boys at Chiyari Station

Amuro Tohru and the Detective Boys drive to Chiyari Station in the hopes of getting Ai Haibara's phone strap back at the lost-and-found, to no avail. The train station itself is fictional, but part of the real life Shōnan-Shinjuku Line, where it's said to be subsequent to Yokohama Station. Its lost-and-found office is modeled after the one at Iidabashi Station, though.

Ebisu Station (恵比寿駅 ,Ebisu-eki?) is a real train station inside Shibuya Ward, mentioned in the anime and movies of Detective Conan as "Egisu Station" (恵木寿駅 ,Egisu-eki?) and in the Magic Kaito TV Specials as "Ebesu Station". It's part of the Shōnan-Shinjuku Line in real life and the manga, with Beika Station implicitly located between it and Gotanda Station. It's part of the Loop Line in the extended canon.

The old building of Ekoda Station (江古田駅 ,Ekoda-eki?) (also known as Seibu Ekoda Station (西武江古田駅 ,Seibu Ekoda-eki?)) is part of the Seibu Ikebukuro Line and neighbouring the Ekoda Campus of Nihon University, where Gosho Aoyama and his assistants studied and lived close to. This old station building and part of the Seibu Ikebukuro Line can be seen during an aerial shot in the epilogue of Yaiba, chapter 255, right next to Ekoda High School. It also probably is the station Kaito Kuroba and Aoko Nakamori enter the train to reach Ikebukuro Station on their way home.[4]

A so far unnamed train station also gets mentioned twice in Magic Kaito, with the Blue Parrot Pool Bar, the American Bar and the old station clock tower said to be close to it. It's unknown whether this is supposed to be Ekoda Station or a different one.

The Detective Boys at Haido Station

Haido Station (杯戸駅 ,Haido-eki?) appears several times in a minor capacity during the manga and the extended canon. The Detective Boys left a train coming from the Shinjuku Ward there in the Soccer Supporter Case. The Black Organization also assaulted the station with an irritant gas in the Kir Transport Case. It seems to be subsequent to Beika Station, which probably places it on the Shōnan-Shinjuku Line in the manga continuity, too. It doesn't seem to be part of the Loop Line in the extended canon.

Ikebukuro Station (池袋駅 ,Ikebukuro-eki?) is the central train station of the district of the same name in the Toshima Ward of Tokyo. Kaito Kuroba and Aoko Nakamori leave it on their way from school.[5] Seibu Ikebukuro Line leads through it, connecting it to Ekoda Station, where Ekoda High School is located close to in the manga and its part of the Shōnan-Shinjuku Line, too. Furthermore, the very first place the serial arsonist sets fire to in Sato's Father Case was at this place.[6][7] It is also mentioned as Sawabukuro Station (沢袋駅 ,Sawabukuro-eki?) in the extended canon of Detective Conan.

Kōenji Station (高円寺駅 ,Kōenji-eki?) is a real train station in the Suginami Ward of Tokyo and part of the Tokyo Metro Marunouchi Line. According to the sign, Kaito Kuroba and Aoko Nakamori leave the station in episode 10, "The Reminiscent Golden Eye", of the Magic Kaito TV Specials, curiously while on the way to Haido City Hotel.

Kokura Station in the Yaiba manga

Kokura Station (小倉駅 ,Kokura-eki?) is a real train station in the City of Kitakyushu, situated in the Fukuoka Prefecture. Yaiba Kurogane, Sayaka Mine, and their friends enter it in chapter 40 of Yaiba, trying to escape from Kojiro Sasaki and Kumo-Otoko to Tokyo Station. 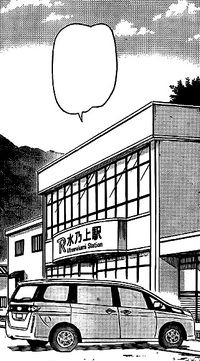 The Minakami Station (水上駅 ,Minakami-eki?) is the central train station of the town of the same name in Gunma and part of the Jōetsu Line. The Detective Boys arrive there together with Sumiko Kobayashi and Rumi Wakasa to collect edible plants. In the case, the building and the town are renamed Minanokami.

Shibuya Station (渋谷駅 ,Shibuya-eki?) is the central train station of the ward of the same name and part of the Shōnan-Shinjuku Line. It can be seen during Ran Mouri's view from the window of Masumi Sera's apartment inside the skyscraper hotel and is seen during a flashback in the Music Box Case. It's also mentioned in the Magic Kaito TV Specials as "Shibōya Station". It's also the place Rei Furuya and Yuya Kazami are at on the cover of the ninth chapter of Zero's Tea Time.

Shinagawa Station (品川駅 ,Shinagawa-eki?) is a real train station in Tokyo, located in the Takanawa and Kohnan districts of the Minato Ward. Its Takanawa Exit is prominently featured in Sato's Father Case.

Tokyo Station (東京駅 ,Tōkyō-eki?), as its name suggests, is the central train station of Tokyo and appears several times in this function in Detective Conan, as well as in Yaiba once. It's located in the Marunouichi district of the Chiyoda Ward in real life. It's also sometimes called Tohto Station (東都駅 ,Tōto-eki?) in the stories.

TR Terminal Station (東都鉄道ターミナル駅 ,Tōto Tetsudō Tāminaru-eki?) is the head/commanding train station featured in The Time-Bombed Skyscraper. Employees give commands to the train conductors and give them updates on obstacles or situations from the command center.

Yoyogi Station (代々木駅 ,Yoyogi-eki?), the central train station of the eponymous area in Shibuya, is mentioned in the anime and movies of Detective Conan with the name "Yorogi Station" (よろぎ駅 ,Yorogi-eki?) as part of the Loop Line.

The bullet train on the cover of the game
Main article: Detective Conan: The Suspicious Gorgeous Train 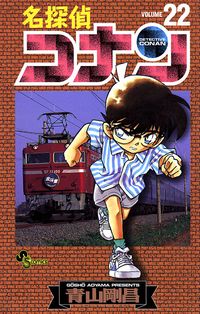 The Hokutosei on the cover of volume 22
Main article: The North Star No.3 Express Leaving Ueno 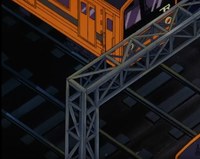 A TR EMU as seen in Wait For Me

These trains seem to be the default electric multiple units (EMUs) for city-wide commuting used by Tohto Railways and often seen in Detective Conan. They are based on those used by Japan Railways (JR). One of these units can also be seen in Wait For Me.