K∀ITO is a self-contained short story first released in the Shōnen Sunday 30th Anniversary Special (週刊少年サンデー30周年記念増刊号 ,Shūkan Shōnen Sandē 30-shūnenkinen Zōkan-gō?), which was published in March of 1989. It depicts a crossover between Gosho Aoyama's two most popular works back then, Magic Kaito and Yaiba, but is officially not in canon with either series.[1]

It was later reprinted in Shōnen Sunday Special 8/1993 and included as a bonus chapter in Magic Kaito Volume 3 under the title of "Yaiba vs. Kaito!", which caused it to be counted as the eighteenth chapter of Magic Kaito by the western fandom. 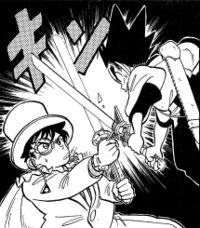 Somewhere in Yaoya, Tokyo: Inspector Ginzo Nakamori and some of his police officers pay a visit to the Mine family to warn them of Kaitou Kid, who announced that he will take a treasured family sword from their residence. Fuji Mine however, matriarch of the house, greets the law enforcement by throwing them out of the entrance gate, ignoring their warnings on the grounds that the family knows how to defend themselves. Yaiba Kurogane noticed the commotion and is wondering about who this "Kanchou Kid" may be, but is nonetheless determined to finish him off if he dares to show up. At the same time, Nakamori orders his people to cordon off the surrounding area, but the Kaitou Kid is already sitting on a roof across the Mine's residence, admiring its sheer size.

Kid immediately goes to work, makes a daring leap over to the wall encircling the property, accidentally headbutting Yaiba's pet vulture Shonosuke, which causes him to fall into the yard and directly into the pond, where he crashes on top of the frog demon Gerozaimon Geroda who inhabits it. Raizo Mine, son of Fuji, and his wife Shizuka become aware of the noise outside the house and check if everything is okay, but Kaito manages to hide behind a bush in time. Gerozaimon gets reprimanded by the house's owner and Kaito muses that the premises seem to be haunted.

Afterwards, he climbs up to the roof, but it turns out to be anything but stable and once again it literally goes downhill for the phantom thief - who plunges into the room of the only daughter of the family, Sayaka Mine, who is just in the process of changing clothes. Her reaction is appropriate, but Kaito knows how to charm her with a kiss on her cheek, whereupon she even tells him the way to the dojo, where the sword is kept. But on the way to it, Sayaka's mother Shizuka and her grandmother Fuji get in his way, which he simply bewitches too with a rose and a kiss on the hand, as well as a gown, whereupon all three women try to stop Raizo, who was about to chase Kid.

Kaitou Kid finally arrives in the dojo, but Yaiba is already waiting for him. After a brief correction of their battle stances by Yaiba's father Kenjuro Kurogane, a kendo-like sword fight breaks out, during which Kaito makes his way onto the wall encircling the premises again, where he has a short conversation with Musashi Miyamoto, who compares Kid to the Japanese Robin Hood, "Jirokichi the Rat", which he just counters by saying that he isn't an honorable thief like him. He then tries to escape using his hang glider, but Yaiba and his pet tiger Kagetora also have a kite ready for transport, causing the fight between the two to go on high up in the air. This battle is observed by Yaiba's nemesis Takeshi Onimaru and his demon servants, who aim a huge cannon at the duo and blow them out of the sky. The sword that Kid managed to hold on to until now falls to the ground, right in front of inspector Nakamori's feet, who gets celebrated by his unit for this.

Next morning at Ekoda High School and the Mine residence respectively: Aoko Nakamori and Kenjuro each try to get Kaito Kuroba and Yaiba to start doing sports respectively - both supposed to practice some kendo. Both of them, looking extremely groggy, simultaneously say that they had enough kendo for now.

Yaiba and Kaito have enough of kendo. 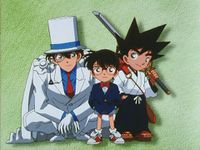 This short story was adapted as the first Original Video Animation of Detective Conan, extended by characters from that series and enhanced by a new framing story in which the Mine family task Kogoro Mouri with protecting their treasured sword and catching Kaitou Kid.

Gosho Aoyama got the request by his editor to draw a special one shot for the 30th anniversary special issue of Shōnen Sunday. Aoyama remembered that he always liked collaborations like Mazinger Z vs. Devilman since he was a child and that he always wanted to draw something like this, so he took both of his at the time most popular series and combined them for this short story.[1]