The thunder god Raijin slowly gains complete control over Yaiba Kurogane's body, telling Musashi Miyamoto and Sayaka Mine, as well as Gerozaimon Geroda and his minions that he won't tolerate anyone standing in his way, announcing to destroy them. Musashi concludes that there's only one way to protect everyone present: to cooperate with Gerozaimon and kill Yaiba before he fully becomes possessed by the demon like Takeshi Onimaru did, which would destroy the universe.

After a heated battle, Musashi hits against the crossguard of the Raijin-ken, which seems to lose an orb which was stuck in there that seems to contain the thunder god, freeing Yaiba the instant it gets disconnected from the sword. Sayaka Mine takes it and starts to argue loudly with Yaiba, who obstinately wants to have it back to be able to beat Gerozaimon. In the end he manages to beat the frog man anyway by a certain whistling, which attracts lots of snakes who are crawling all around Gerozaimon, who, as a frog, is extremely afraid of them. His minions escape and Yaiba and his friends manage to take him hostage, dragging him back to Musashi's house.

Back there, Yaiba still persuades Sayaka to give him back the thunder god's orb, which she continues to decline.

It's starting to snow in Tokyo. Just when its citizens are enjoying it, Takeshi Onimaru appears over Minato with his airship and destroys the Tokyo Tower to prove his power and subjugate all of Japan.

Meanwhile on Mount Tengu, it also started to snow and Yaiba, Kagetora and Shonosuke are playing outside, before Yaiba wants to drag the captured Gerozaimon outside to punish him for everything he did, but then gets scolded by Sayaka for being way too energetic and violent. While a new argument arises, a strange young lady appears at Musashi's house who gets welcomed to stay inside and warm herself in the cottage. Gerozaimon quickly realizes who she really is before she makes the mistake of grabbing into the open fire without flinching, deciding to give up the masquerade and reveal herself.

The mysterious young lady reveals herself to be Hebi-Otoko, the snake man and another of Takeshi Onimaru's Eight Demons and mortal enemy of frogs like Gerozaimon Geroda, who he wants to kill for his failure, too. After a lengthy discussion and Yaiba and Sayaka making fun of Gerozaimon's and Hebi-Otoko's real names, the latter summons the minions to finish Yaiba off, who seemingly can't stop laughing. Sayaka is confused by Yaiba's behavior, but Musashi Miyamoto quickly realizes that he is doing it on purpose to throw off his opponents.

Gerozaimon, who is depressed that Onimaru abandoned him and wants to see him dead, gets freed by Yaiba, before the boy gets thrown outside the house. There he finds a way to spin the Raijin-ken like a circular saw when he puts his fingers inside the perforated crossguard where the thunder god's orb was stuck in before.

Birth of a Killer Technique

Yaiba Kurogane starts to attack Hebi-Otoko and his minions with his new spinning sword technique by slicing some trees to fall down on them. Gerozaimon, still sad about being abandoned, starts to cry and aimlessly punches around, which causes him to unintentionally finish off several of the Oni minions. Yaiba accidentally loses his spinning sword, which flies away and lands directly on the snake man's tail, severing it. An enraged Hebi-Otoko gets dragged away by his minions, swearing revenge.

In the evening, Yaiba still practices his spinning sword technique (while almost hitting Musashi), which Sayaka uses to cut some vegetables. The group starts to discuss what this new technique should be called, with Musashi preferring "Senpuken", but the consensus being "Rolling Thunder Special", which seems to be too difficult for Yaiba to pronounce. In the end, he stays up all night, trying to say it correctly.

Hebi-Otoko found himself a new tail in the meantime: A tree branch tied to his severed end, greatly embarrasing him.

Yaiba is still trying to figure out how to say "Rolling Thunder Special", while Hebi-Otoko and his minions use the distraction to set Musashi's house everyone is in on fire. When they realize what is happening, Yaiba cuts the cottage into little pieces, with the burning remains setting themselves on fire, panicking and running aimlessly towards Hebi-Otoko, whom they burn with this action, too. After extinguishing the fire in the snow, they escape to a rock ledge, which of course breaks off and slides down the mountain.

Further down, in the snowy forest, Yaiba and his friends prepare some traps for Hebi-Otoko and his minions, resulting in a battle between the two during which Yaiba finally manages to cut the snake man in two halves - causing him to transform back into a regular snake and fleeing into the woods. With this problem out of the way, but no house to stay at anymore, Musashi Miyamoto suggests that they visit a nearby village he knows.

Yaiba makes fun of friends that they are already exhausted from the walk, causing Musashi to give him two extremely high Geta (wooden shoes) to train his balance again, which greatly impedes him. Fed up with his manners, the others can now go forward and reach the village, leaving Yaiba behind.

The group gets a really warm welcome in the village, a warm bath, drinks and beds for the night, but it seems like the villagers are preparing to kill them while they are asleep, which Yaiba notices when he arrives. They explain to him that there's an old Tengu visiting and raiding their community for three centuries now, asking Yaiba to finish him off for them, to which he agrees. He tries to kill the "Tengu" before realizing that it's actually the sleeping Musashi, clearing up the situation. Thinking that he's a friend of the "Tengu", the villagers try to attack Yaiba too, but he defends by kicking his opponents away with the high Geta.

After showing him a photo of Musashi getting caught in the act, Yaiba and his friends have to accept that they are telling the truth about the old man, having to flee and leaving that village behind, reaching a larger town in a valley.

Catch Me If You Can

Takeshi Onimaru sends out another of the Eight Demons again, who seems to be really fond of calculating the probabilities of his plans. Meanwhile, Yaiba and his friends reach the town from the end of the previous chapter, being extremely hungry, until they notice that there are tables with food standing around on the street. They quickly realize it's a trap, with one of the tables being the disguise of a new demon Onimaru sent out: Kumo-Otoko, the spider man - but the group doesn't really care, since they are busy eating. When he still doesn't leave them alone, Yaiba angrily stomps on the ground, frightening Kumo-Otoko a lot because of the vibrations he causes, which he, as a spider, is way more sensitive to.

Kumo-Otoko tries to escape to Onimaru's airship, but Yaiba and his friends follow him until they reach the top of the balloon filled with hot-air. Yaiba tries to stomp on the ground again, but because of the soft surface, it's impossible. He just solves it by stabbing into the balloon with his Raijin-ken, which expectably causes the airship to crash - unfortunately with Kumo-Otoko, his minions and Sayaka on board, who now have her in their clutches.

While Yaiba, Musashi, Kagetora and Shonosuke are wandering around the town to find Sayaka, they use the opportunity to steal food from several restaurants. Kumo-Otoko reads about their exploits in the newspaper and prepares a new trap, with Sayaka hanging inside a web, getting fed with Takoyaki by the Oni minions.

Kumo-Otoko takes over a restaurant, disguising as the head cook and places signs that "everything's free" all around it, attracting three unwitting customers (Gosho Aoyama, Eiichi Yamagishi and Yutaka Tani), whom he chases away with a bunch of kitchen knives, since they are not the people he aims for. Yaiba and his friends take seat themselves inside the restaurant before the spider man again reveals himself. Yaiba throws his plate to the ground to frighten him again, but this time, Kumo-Otoko wears earmuffs. The group now develop a ruse that they are whispering a good joke to each other, causing Kumo-Otoko wanting to listen to it, too. He takes off his earmuffs, followed by Yaiba and his friends throwing all the dishes on the ground they could get their hands on, shocking the spider immensely, while the group escapes.

The spider demon wants to give chase, but the actual restaurant owners present him the bill of the 400 plates that were destroyed thanks to him, so he is forced to work off his debt first.

Yaiba, Musashi, Gerozaimon, Kagetora and Shonosuke still haven't found Sayaka. Now the rest disappears one by one after naively following food trails in dark alleys and getting knocked out, until just Yaiba is left. He finds everyone seemingly floating in mid-air over the street and starting an attack, not realizing that there's a web spun across the street, getting entangled in it, too.

After getting the advice by Musashi to walk on the vertical threads, since those aren't sticky, he manages to throw Kumo-Otoko off of it during their battle, who gets carried away by his Oni minions, again swearing revenge. Takeshi Onimaru punishes him by tieing him up and hanging him upside-down from Onimaru Castle.

Musashi Miyamoto calmly travels across a pond with the rest of the group and fishes, bothering Yaiba Kurogane who's eager to go back to Tokyo and battle Takeshi Onimaru. Suddenly, a giant snail with arms surfaces and introduces himself as Namekuji-Otoko, the "snail man" and the next of Onimaru's Eight Demons. Yaiba and Kagetora attack him, but don't really stand a chance, hence the group escapes back into the town, where Namekuji starts to rampage.

The gang gets thrown into a retail during the tumult, where they find lots of salt packages, which they throw above the snail man and Yaiba slices open with his "Senpuken" technique, causing him to shrink to the size of a regular snail, forcing him to flee - but not without swearing revenge, of course.

Settings appearing in this volume: 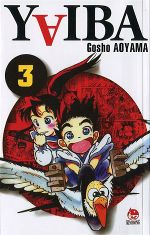