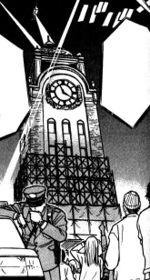 The clock tower in the Magic Kaito manga.

The clock tower in the anime of Detective Conan.

The unnamed clock tower from the "Black Star" story in chapter 23-24 of Magic Kaito (adapted as the first segment of episode 219 from the anime of Detective Conan and episode 6 of Magic Kaito 1412) is a Taishō-style architecture building, the setting of a heist by Kaitou Kid and the chronologically first location he encounters Shinichi Kudo at.

The exact location of the clock tower so far is unknown, but it seems to be close to Tokyo Tower, since its bell can still be heard from the roof of the upper observation deck of the latter. Inspector Ginzo Nakamori tells Juzo Megure - who still works at the Beika Police Station back then - that even despite their different departments, this isn't the place he's in charge of anyway, implying for it not to be set in Beika. The familiarity of the students at Ekoda High School with the building and the fact that Kaito Kuroba and Aoko Nakamori met for the first time as elementary students in front of the clock tower could mean that it's somewhere in the Ekoda Area. This is also corroborated by one of the policemen in charge, Yoichi Sensui, hailing from there. It's also across a currently unnamed train station. According to Akako Koizumi's premonition, Shinichi Kudo will fly in "from the east", which could mean that the tower is somewhere to the west of Beika, which would roughly fit with the location of Ekoda to the north-west of Tokyo Bay.

The clock tower was created by Futoshi Takarada's father fifty years ago, when he was in charge of the town as a mayor, who hired a foreign clock master to design it for him and handed the building down to his son after his death.

Approximately ten years ago, Aoko Nakamori, still in elementary school age, was waiting for her father to pick her up, but did not manage to do so because the police work was preventing him from doing that. The young Kaito Kuroba noticed that, introduced himself to her and cheered her up, starting their friendship.

Kaitou Kid announces to steal the clock of the bell tower, which is supposed to be moved to an unnamed theme park. Futoshi Takarada is acting furious about this note, but actually uses the opportunity for a scam, by having already replaced the gems in the arms of the clock with imitations, trying to sell the real things thanks to the high offers he gets because of Kid's announcement before the tower itself gets moved away. Kid seemingly manages to steal the arms of the clock, which is part of a trick, leaving behind a message for inspector Ginzo Nakamori and the policemen that helps to delay the moving of the tower, causing the police to examine the place and noticing the fake diamonds embedded. The city buys the clock tower for a way cheaper price and decides against moving the object to the theme park.

The real life model for the building in the manga of Magic Kaito and the anime of Detective Conan is the clock tower of the Koriyama Public Hall in Koriyama City, located in the Fukushima Prefecture, with the main differences being that the upper part was changed to the place where the bell is integrated and a bigger clock face. The clock was removed for a long time until it was reintegrated into the tower in 1998[1], possibly inspiring Gosho Aoyama to his story in 1999.