Yaiba Kurogane is a young boy living in an unnamed jungle, together with his father Kenjuro, who instructs him about things like survival training and martial arts - especially Kendo. One day they kill and eat a Gorilla, with a tiger trying to steal a bit of the grilled goods, but the Gorilla's next of kin try to retaliate - so Yaiba, his father and the tiger have to flee. They hide in a wooden box, which unfortunately gets closed that very moment and loaded onto a plane to be sent to Narita Airport near Tokyo.

After their arrival, Kenjuro meets an old rival of his, Raizo Mine, and his daughter, Sayaka - who completely fascinates Yaiba, never having seen a girl before. But they are still on the run: Kenjuro grabs Raizo, Sayaka, his son and the tiger to flee again - this time from the airport police - and dumps this group in a taxi, asking the driver to bring them to the Mine residence...

You'll Be Taking Care of Me

Main article: You'll Be Taking Care of Me

After succesfully escaping the airport police by pineapple means, Kenjuro Kurogane unsolicitedly moves his son into the Mine residence, against the wishes of its owners, Raizo and his daughter, Sayaka Mine. Yaiba takes a stroll through the house and encounters Grandma Mine, who he thinks is an underfed baboon. Fed up with him, she takes him into the Dojo of the house and, after learning about him being Kenjuro's son, offers a challenge: If Yaiba can beat Mutou, the strongest fighter in the Mine Dojo, Yaiba can stay in their house. And at first, her expectation of him losing this battle seems to come true...

A brand new day at the Mine residence and Kenjuro Kurogane is already leaving again, making Raizo and Sayaka Mine celebrate that the two troublemakers are gone. But just like he announced the day before, he left his son with the Mine family. Yaiba Kurogane follows Sayaka to school, wanting to know what it is. While her classmates are fascinated by the spikey-haired young boy, flooding him with questions, he quickly finds himself in his second battle since his arrival in Japan - against the choleric teacher Mr. Sudou, a 7th Dan in Kendo...

After losing against Yaiba Kurogane, Mr. Sudou wants him off the school as soon as possible. Following his traces into the School Dojo together with the Principal and Grandma Mine, Sudou offers a second challenge - that Yaiba has to beat Kumazawa, captain of the Kendo club, who's extremely skilled and was a finalist at the previous Fall Tournament...

No Need For Mercy

Yaiba Kurogane is on the verge of losing his battle against Kumazawa, as Mr. Sudou hoped for. Kenjuro Kurogane appears during the fight and gives Yaiba the advice to use the "Dance of the Wild Animal", which he does, allowing him to win the challenge - and with the side effect that it drives Kumazawa crazy, trying to kill Yaiba. The latter gets saved just in time - by Takeshi Onimaru, of all people.

Yaiba Kurogane wants to battle Takeshi Onimaru at all costs, but he denies, thinking of Yaiba as a weakling who would just taint his technique. Following this, Yaiba sets up several, partly lethal, traps around the school to convince Onimaru to fight against him, which he continues to vehemently deny, which causes him to get buried alive. Yaiba celebrates his "victory" that evening, howling at the moon, while Onimaru digs himself out of the pit, swearing revenge...

I'll Be Your Opponent

Takeshi Onimaru is still angry about what Yaiba Kurogane did to him at school and wants revenge. He goes to the Mine residence, while Yaiba is on his way to the Onimaru residence himself, so both miss each other. While Onimaru causes commotion at the Mine's mansion and has to leave empty-handed again, Yaiba eats through everything the Onimaru grandfather offers him, meets his pet vulture Shonosuke again who followed him back from his home jungle and returns to the Mine residence just as Takeshi arrives at his house, again missing each other. When Takeshi notices what Yaiba's vulture did to his doves and Yaiba sees what Takeshi did to his tiger, both angrily turn back again, this time meeting each other on a pedestrian bridge...

Yaiba Kurogane finally gets the desired fight with an enraged Takeshi Onimaru, which seemingly leads them through half of Tokyo, creating lots of unnecessary property damage in the process. There's no real winner in the end...

Takeshi Onimaru is still driven to take revenge on Yaiba Kurogane, both starting to train relentlessy to beat each other. In a burst of rage during his practice in the private Dojo, Takeshi destroys an old family armor and discovers a trap door right under it, leading to a hidden cellar even he himself didn't know about before. Down there he finds two large statues of the Japanese Kami Raijin (God of Thunder) and Fujin (God of Wind), with the latter one holding a shimmering sword in his hands Takeshi's grandfather presents to him as the family heirloom Fujin-ken, the Sword of the Wind God...

Settings introduced in this volume:

Mentioned on a banner of "Bali Tours" at Narita International Airport.

The unnamed jungle Yaiba Kurogane and his father live in seems to be (intentionally) highly ambigious about what jungle or even on which continent it could remotely be. Besides the rather generous surroundings, animals like Gorillas (from Sub-Saharan Africa), Tigers (having their habitat in continental Asia) and Jaguars (who usually live in Central and South America) seem to have their habitat there. 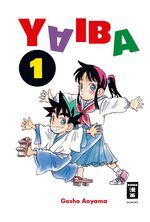 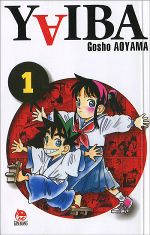