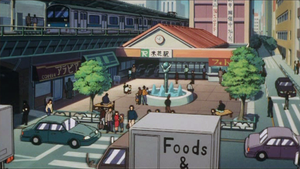 Beika Station in the movies.

Beika Station (米花駅 ,Beika-eki?) is the central train station of the fictional ward and district of the same name and seems to possess two tracks. In this function it appears in Detective Conan and Play It Again. Subsequent train stations are Haido (in the Manga), Midoridai and Shimodababa (in the expanded canon). The equally fictional Chiyari Station, which is somewhere behind Yokohama, is a ride of 30 minutes away from it.

Beika Station in the Manga...

... and Shin-Ōkubo Station in real life.

In the expanded canon (Anime Originals and Movies), Beika Station is not only modeled after Shin-Ōkubo Station, but seemingly identical in position on the Tohto Line (which is based on the real Yamanote Line) too, which would place it (and the Beika District by extension) roughly where the district of Hyakunin(jp) in Shinjuku is in real life. Beika Park in this incarnation can be reached in ten minutes by foot from the station, which would roughly be one kilometer or ~0.6 miles away from it with average walking speed.

The Detective Boys follow Mitsuhiko's trail to Beika Station, where they ask an attendant if he encountered their friend. The attendant answers that Mitsuhiko hastily exchanged an adult ticket he had accidentally purchased with a child ticket. The attendant says that based on the fee of his ticket, Mitsuhiko went to either the Chiba or Gunma Prefecture.

Akemi Miyano hid the cases with the money in a locker at Beika Station in this animated version of the story.

The Deduction That Was Too Good (Anime: 207)

Crossroad in the Ancient Capital (Movie: 7)

The Man Obstructed by the Steel Frame (Anime: 442)

Beika Station can be acquired as a building for Mystery Town in the game. 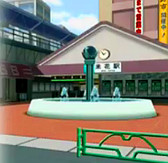 Beika Station is used as the background on some cards.

Along Came A Culprit (HtC Manga: 1)

Right at the beginning of the series, Hanzawa-san arrives at Beika Station, with commuters warning him not to exit here. He immediately gets into problems scanning his Suika card to get out, with Ran Mouri and Sonoko Suzuki watching him, thinking of him as a shady person before leaving through the East Exit. Hanzawa angrily fantasizes about destroying the station, before Conan Edogawa too passes by and takes him into account, seemingly on his way to the station.

The sign with the name of district at the station also appears in the keyhole of the first volume, visible through a train window.