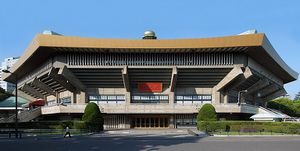 The Nippon Budokan (日本武道館 ,Nippon Budōkan?), often just simply called the "Budokan", is a real indoor arena inside the Kitanomaru Park, which is part of the Chiyoda Ward of Tokyo. Its name translates to "Japan Martial Arts Hall", but is also used for other sport competitions and music concerts. It regularly appears in the works by Gosho Aoyama.

Keisuke Hara and Asuka Anzai retreat to the empty Nippon Budokan, where Asuka sings a music concert just for Keisuke, to use their last hours on Earth fully before it gets destroyed by the satellite. It's also here where Keisuke finally remembers the number code he entered.

Aoko Nakamori wants to attend the concert of "Prince X Prince" in the Nippon Budokan, going there together with only one person - Kaito Kuroba, if Kaitou Kid successfully finishes his heist at Ekoda Museum, or with Saguru Hakuba if he manages to capture Kid for good. In the end, both end up severely injured in hospital, so she has to go to the Budokan accompanied by her father, inspector Ginzo Nakamori.

TWO-MIX have a concert in Nippon Budokan Ran Mouri and Sonoko Suzuki wanted to attend, which gets delayed by the music duo getting kidnapped. The Detective Boys manage to rescue them and are allowed to go backstage, while Conan Edogawa gets on stage with Minami Takayama to sing along with her.

The arena featured in this case seems to be a fictionalized counterpart to the Nippon Budokan.