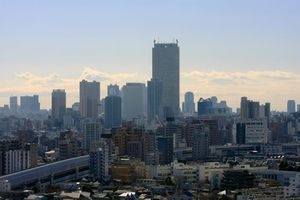 The Ikebukuro District of Toshima Ward, with the Sunshine 60 Skyscraper.

It is the place where Kaito Kuroba and Aoko Nakamori live in the Manga of Magic Kaito[1][2], the setting of Wait For Me, the location of the school of Keisuke Hara in The Santa Claus of Summer and a past residence of Gosho Aoyama himself.[3] It also seemed to serve as a model for some surroundings in late Yaiba and early Detective Conan, with what appears to be the Sunshine 60 Building appearing in its background several times and the PARCO Store featuring prominently in the latter.

Kaito and Aoko leave Ikebukuro Station on their way from school.

The Detective Boys in front of the "PAPCO Store".

Ikebukuro (池袋 ,Ikebukuro?) is the central commercial and entertainment district of Toshima. Sometimes, it is also called Sawabukuro (沢袋 ,Sawabukuro?) in the expanded canon of Detective Conan.

There's a Chinatown to the north of Ikebukuro Station, where Conan Edogawa, Kogoro and Ran Mouri go to a Chinese restaurant because they've got some discount vouchers.[4][5]

Ikebukuro Station (池袋駅 ,Ikebukuro-eki?) is the central train station of the district of the same name. Kaito Kuroba and Aoko Nakamori exit it on their way from school.[1] Seibu Ikebukuro Line leads through it, connecting it to Ekoda Station, where Ekoda High School is located close to in the Manga. The very first place the serial arsonist sets fire to in Sato's Father Case was at this station.[6][7] It is also mentioned as Sawabukuro Station (沢袋駅 ,Sawabukuro-eki?) in the expanded canon of Detective Conan.

The PARCO Department Store is located close to the Ikebukuro Station and the first subsidiary of the PARCO company. The Detective Boys reach this store of the chain during their treasure hunt, where it was renamed "PAPCO".[8] There's another PARCO Store in Shibuya, that also served as a model for a "PAPCO Store" in Detective Conan later on.

Sunshine City (サンシャインシティ ,Sanshain Shiti?) is a building complex in the east of Ikebukuro, especially recognizable by the distinct Sunshine 60 Skyscraper, which (or a fictional building modeled after it) is visible several times in the background of later Yaiba and very early Detective Conan volumes, including one of the Omake about Gosho Aoyama and his assistants.

Senkawa (千川 ,Senkawa?) is a district in the Nagasaki Area, in the north-eastern part of Toshima. This is also where Gosho Aoyama used to live in.[3]

Senkawa High School (千川高校 ,Senkawa Kōkō?) is the educational facility Keisuke Hara from The Santa Claus of Summer attends in his second year. It is also used as a recurring setting in H2, a Manga by Gosho Aoyama's friend and colleague Mitsuru Adachi. It could also be the school Yutaka Takai and Mamiko Abe attend in Wait For Me, albeit this in never confirmed.

Senkawa TV (千川TV ,Senkawa TV?) is a television station in the district who report about Yutaka Takai and his inventions. 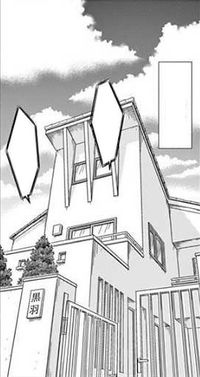 The residence of the Kuroba family is located in Toshima in the Manga of Magic Kaito.

The stately house of the late magician Toichi Kuroba, whose son Kaito Kuroba and wife Chikage Kuroba live in, probably close to Ikebukuro Station.[1] It's got a hidden rom, the secret base of operations of Kaitou Kid.

Wait For Me plot overview