Momoko Aoyama (青山 桃子 ,Aoyama Momoko?) is a student in the second year of Ekoda High School and a private detective who inherited her father's detective agency. She currently attends class 2-B together with Kaito Kuroba and Aoko Nakamori, is the protagonist of the one shot volume 100% Tantei Monogatari and briefly appears in Magic Kaito. 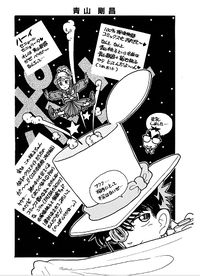 Momoko appears (and gets mentioned in the TV special) as one of the girls who gave Valentine's chocolate to Kaito Kuroba. All of the three girls visible were drawn by Yutaka Abe and are intended as allusions: Momoko as the protagonist of his 100% Tantei Monogatari series, "Mamiko-chan" is based on Mamiko Takai and "Kyōko-chan" is named after Abe's good friend, the mangaka Kyōko Fumizuki

There's a blonde girl with ponytail and hair over her temples looking like Momoko and being part of class 2-B in chapters 2, 7, 8 and 15, too, most of the time as part of Aoko Nakamori's and Keiko Momoi's circle of friends and these times drawn by Gosho Aoyama. It's left unclear whether it's supposed to be Momoko again, though.