Yaiba Kurogane and his friends finally start the attack on Onimaru Castle, but after a rather short skirmish with the Oni Minions fall into a trap leading them deep into the building, straight into a well where they are supposed to drown. Kojiro Sasaki can free everyone by opening a flow with the help of his Monohoshizao sword, flushing them into a small cave where Sayaka Mine ends up unconscious. Yaiba wants to bring her back with a kiss...

Yaiba Kurogane continues his try to kiss Sayaka Mine, but when he gets his face really close, she just spits a fountain of water in his face. The ensuing commotion causes the giant angler fish Yakitori-kun - the first of Takeshi Onimaru's Four Heavenly Kings - to rise up and attack the group, managing to lure most of them into his stomach by making them watch television in his intestines. They are soon joined by Ana Shioji and her cameraman, still reporting live from the battle and Yaiba's so far unsuccessful attempts from outside Yakitori-kun to free his friends.

After getting provoked by Yaiba Kurogane, Yakitori-kun spits water after him, making him lose his paper lantern after Musashi Miyamoto slips off his lantern to which he held onto. Yaiba and Yakitori start to imitate a football game, with Ana Shioji providing the fitting commentary and Yaiba handling the paper lantern like a ball, tricking Yakitori to ram right into a rocky wall, knocking him out. This enables Yaiba's friends to flee and creates a hole that leads straight into the basements of Onimaru Castle. Yaiba uses his Kaminari Giri to hit Yakitori and transform him back into a regular angler fish - unfortunately causing him to flood the basements, since Yakitori's giant body was keeping back the water from the cave. The group runs upstairs and continue their way back up to Takeshi Onimaru...

Trap Within a Trap 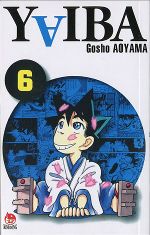