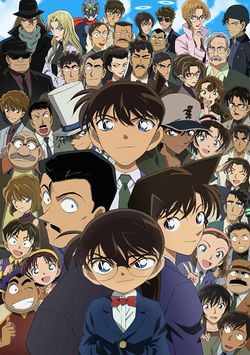 The series was created and is drawn by Gosho Aoyama. The protagonists from his earlier series Magic Kaito look very similar: Kaitou Kid has made many appearances as himself in the anime and manga of the series. The main protagonist of the Detective Conan series, Shinichi Kudo, and the protagonist of the Magic Kaito series, Kaito Kuroba, are also similar. Hundreds of minor characters have been created and are always given backgrounds, motives, and personalities that put them under suspicion during the investigation.