Numerous different countries besides Japan appear as settings in the works of Gosho Aoyama or play into the plot in an indirect manner.

Toronto, capital of the Canadian Province of Ontario, as seen in movie 20

The City of Toronto in Canada briefly appeared in movie 20, The Darkest Nightmare. A character of known Canadian nationality was Aquavit, who worked as a mole in the Black Organization for the Canadian Security Intelligence Service (CSIS). A flight set to Canada can also be spotted in the anime original episode Conan Kidnapped.

A tourist group going to the Province of Bali in Indonesia is seen at Narita Airport in the first chapter of Yaiba. 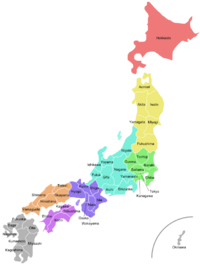 Japan is the main setting of pretty much every work by Gosho Aoyama. For a more detailed overview, see Prefectures of Japan. Important places in the country that appear in several works are Tokyo, Osaka and Kyoto.

London, capital and largest city of the United Kingdom, as seen in movie 20

The United Kingdom repeatedly plays an integral role in the plot of Detective Conan and in Magic Kaito in spades. It's the home of Shinichi Kudo's/Conan Edogawa's favorite literary figure, the master detective Sherlock Holmes by English author Arthur Conan Doyle. Characters of known British nationality or heritage are Shiho Miyano/Ai Haibara, Elena Miyano, Shuichi Akai, Shukichi Haneda, Masumi Sera, Mary Sera, Saguru Hakuba and his so far unseen mother, Minerva Glass, Apollo Glass, Juno Glass, Diana Kingstone, Stout, Judy Hopper, James Hopper and the rest of the Hopper Magician Troupe. It is most often represented by the City of London in the stories and the Secret Intelligence Service (MI6) seems to play a bigger role in the meta plot of Detective Conan in the future.

New York City, the most populous city of the United States, as seen in movie 19