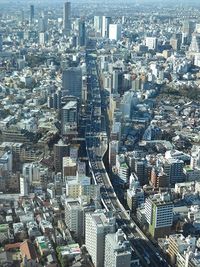 Aerial view over Shuto Expressway, leading through a part of Shibuya.

Shibuya (渋谷区 ,Shibuya-ku?), also mentioned as "Shibōya" in the Magic Kaito TV Specials, is one of the 23 special wards and an important business and entertainment center of Tokyo, which appears, gets mentioned and used as a model a lot in the works by Gosho Aoyama. The famous Shibuya Crossing, the Tsutaya Store, Shibuya 109 and the fittingly named Shibuya Station are part of it, all of which appeared in his different works. It's composed of five major areas divided into 31 districts, with a population of 221,801 (2016). Shibuya is also the name for a shopping district around Shibuya Station contained in this ward.

Ran's view over a large part of Shibuya (and Shinjuku in the distance) from Masumi's apartment.

The 50 floors tall skyscraper hotel Masumi and Mary Sera live in during the Romance Novelist Murder Case shares its position (but not its model) with the Daikanyama Address Tower, the only skyscraper of this kind in the vicinity from which such a panorama like the one depicted through her windows can be seen. The building is a popular spot for the filming of live action dramas. In the manga of Detective Conan, this place seems to be part of Beika. 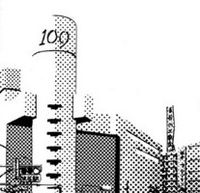 The 109 Department Store in 100% Tantei Monogatari.

Momoko Aoyama passes the 109 Department Store in chapter 2 of 100% Tantei Monogatari while in Shibuya. It's also visible in the background after Akako Koizumi teleports Kaitou Kid and herself directly to Shibuya Crossing while stopping time in episode 5 of Magic Kaito 1412.

This famous place is visited by Kogoro and Ran Mouri, Conan Edogawa, Heiji Hattori and Kazuha Toyama during a shopping tour at the beginning of the Wedding Murder Case. Akako Koizumi teleports Kaitou Kid and herself directly to Shibuya Crossing while stopping time in episode 5 of Magic Kaito 1412, with the QFRONT Building (which, while located in Udagawa Town, directly borders Dougenzaka and faces the Crossing) and its Tsutaya Store (renamed "Sutaya"), as well as the buildings of the 109, Forever 21 and UC Department Stores visible in the background.

This building can be seen during Ran Mouri's view from the window of Masumi Sera's apartment inside the skyscraper hotel.

Shibuya Station (渋谷駅 ,Shibuya-eki?) is the central train station of the ward. It can be seen during Ran Mouri's view from the window of Masumi Sera's apartment inside the skyscraper hotel and is mentioned in the Magic Kaito TV Specials as "Shibōya Station". It's also the place Rei Furuya and Yuya Kazami are at on the cover of the ninth chapter of Zero's Tea Time.

Conan arriving at Ebisu Bridge in the manga.

During the Drug Trading Case, Conan Edogawa goes to Ebisu Bridge, which is in the district of the same name of Shibuya ("secretly" being followed by Ai Haibara and the Detective Boys). Interestingly, it's implied to be in or near Beika here, considering they were on the way to Professor Hiroshi Agasa's house and went to the bridge by foot. The name of the bridges (this one and an identically named in Osaka) also play a bigger role during this case.

Gets mentioned in the anime and movies of Detective Conan as "Egisu Station" and in the Magic Kaito TV Specials as "Ebesu Station".

This district gets mentioned in Saguru Hakuba's thoughts during the Sun Halo story arc from Magic Kaito as one of the places the truck with Kaitou Kid and Aoko Nakamori was driving through before leaving Tokyo.

This building can be seen during Ran Mouri's view from the window of Masumi Sera's apartment inside the skyscraper hotel. 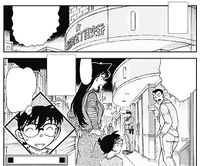 A police station in Sendagaya served as the model for the one in Beika Town.

This is a real Kōban, which served as the model for the Police Station 5th Block Beika Kogoro Mouri has to visit at the end of File 977.

The Shōgi Kaikan in the manga.

The shōgi building from Shuukichi Haneda's flashback in File 901 is the real Shōgi Hall of Tokyo (also known as "Shōgi Kaikan"), located at building 39 in the second block of Sendagaya.

The telephone booth in front of the PARCO Store Shibuya as well as the department store itself served as models for the place Ran Mouri and Conan Edogawa encounter Shuichi Akai.

Gets mentioned in the anime and movies of Detective Conan as "Yorogi Station".

Kazuyoshi Onda gets killed in a park explained to be "near Shibuya-ku".

The route the truck with Kaitou Kid and Aoko Nakamori inside takes and Saguru Hakuba re-creates thanks to the SNS messages in chapter 35 leads through a couple of real places, one of them being Nishihara Town, a district of Shibuya.

The train/subway rides on the fictional "Tohto Misesaki Line", which is a play on the real Tobu Isesaki Line, with the next stop being "Ebesu" - most likely a pun on Ebisu, which is a district of Shibuya. According to the destination board, it also mentions "Shibōya" as a destination.

In contrary to the original manga chapter, Akako Koizumi teleports Kaitou Kid and herself directly to Shibuya Crossing while stopping time for their final confrontation during this episode.