Jodie and Conan arrive at Camel's side to find out the Jodie that Camel talked with was Vermouth in disguise. Conan deduces Amuro's plan—he used Shibuya's phone to send a message to Jodie, explaining why she didn't remember sending it. Bourbon had deduced that Jodie' phone would run out of battery by night and made sure that she used her FBI colleague's cellphone to call back. If anything happened to Shibuya, Jodie and her colleague—Camel—would be called to the crime scene. This allowed Vermouth to assume Jodie's appearance and identify Camel. Vermouth then made a fake-call to the school to lure them to the hospital. After Bourbon pressured Camel, he let his guard down upon seeing Vermouth, in the guise of Jodie, and unwittingly let slip the truth about Rikumichi Kusuda's death.

Meanwhile, Vermouth reunites with Bourbon and relays her discovery—Rikumichi Kusuda shot himself in his car. Bourbon is pleased with this, as it confirms his theory that Shuichi Akai is still alive. Vermouth disagrees with him, pointing out that Shuichi's conversation with Kir just before his death was no act. With this response, however Bourbon figures out the true meaning of Shuichi's last words, "Who thought it would have come to this?", and sets of to find the "ghost" that is Shuichi Akai.

Later, Conan is absent from school due to a cold, though Ai believes there is more to Conan's absence then meets the eye. At the Mouri detective agency, Kogoro tells Ran that Conan won't be home to watch the Macademy Awards with her, because he is staying at Agasa's house. Yusaku Kudo is nominated for best script award and is expected to be in the ceremony. At the Kudo house, Subaru Okiya is watching the ceremony but is interrupted by someone at the door. He opens the door to meet Bourbon, who claims they aren't meeting for the first time ever.

Subaru allows Amuro in, but refuses to let a group of Amuro's "friends," who are also outside, to come in too. Amuro explains how Shuichi could have faked his death with help from Kir and with Conan as the mastermind of the plan. Concurrently, Jodie rides with Camel to Raiha Pass, since they have also come to the same conclusion as Amuro, based on what Jodie heard from Conan at the shrine. Jodie also suspects that Subaru, who had used a similar phrase to Shuichi, may be Shuichi in disguise. Suddenly, Camel has to speed up to shake off a group of cars that start to chase them. Amuro declares that Subaru is Shuichi, and demands that he reveal himself, saying that Jodie and Camel have been cornered by his "friends."

Amuro tells Okiya to take his mask off, and Subaru takes off the mask for his cold. Amuro is not satisfied, and demands that Subaru drop the whole disguise. As Amuro points out that video cameras have been set around the house—with the purpose of observe them—Subaru asks if his appearance or voice matches those of Shuichi Akai's. Amuro replies that appearances can be deceiving, that a voice can be changed by wearing a neck-shaped-voice-changer. He then removes Subaru's high collar to find nothing. He then receives a call from his colleagues.

Camel shows off his driving skill to avoid a roadblock, but damages a tire in the process. Jodie thinks the ones after them are Amuro's colleagues, trying to capture them to lure Shuichi into a trap, and mentally asks Shuichi for help. As if he heard her, Shuichi reveals his presence in the back seat and orders Camel to open the car deck, which alerts the cars following of his presence, who report it to Amuro.

At the same time, Yusaku wins the best script award at the Macademy Awards, and goes up to the stage to receive it. Both Subaru and Ran see this, as they are each watching from their homes. Meanwhile, Conan is watching a group of tv screens and computers, Voice-Changing Bowtie in hand as he leans over a microphone.

Shuichi has Camel drive straight and steady, allowing him to shoot out the front tire of the lead car, causing the others to crash and putting an end to the pursuit. Unexpectedly, Shuichi orders Camel to turn back to Amuro's colleagues and asks for the phone of the one keeping in contact with Amuro. Shuichi informs Amuro that he has worked out Amuro's identity and asks him to stop hunting him. Amuro then leaves Kudo house, taking another glance at the cameras before he does. Subaru then goes upstairs to talk to Conan. It is revealed that...

Amuro/Bourbon is really Japanese Secret Police agent Rei Furuya - like Kir, he has infiltrated the Black Organization. His colleagues are also Secret Police agents. Rei's true role as a spy committed to bringing down the Organization ultimately prevents him from divulging Shuichi's survival and, by extent, exposing Kir's own infiltration.

Rei's grudge against Shuichi comes from an incident involving an unspecified man—Shuichi tells Rei that he regrets what happened in that incident.

Subaru Okiya is really Shuichi Akai in disguise—his apparent death was a ruse to allow Kir to maintain her infiltration of the Organization. However, in order to throw Amuro off the track, and to give Shuichi a chance to aid Jodie and Camel, Yusaku Kudo plays the role of Subaru, using the Voice-Changing Face Mask, as well as getting assistance from Conan, who used his Voice-Changing Bowtie over the microphone when the face mask had been removed. Since the real Yusaku couldn't go to the Macademy Awards, Yukiko Kudo, after applying the Subaru disguise to her husband, disguises as him and accepts the award in his stead.

Before leaving the Kudo house, where Shuichi, Jodie, Camel and Conan are, Yukiko compliments Shuichi on the fact that he can put on the Subaru disguise on his own. Shuichi explains his new identity to Jodie and Camel, and how he used Agasa's choker voice changer in conjunction with the mask to become Subaru Okiya. He reveals that James Black knows about the fake-death plan due to Black accidentally discovering that Shuichi had glue on his hand. Shuichi says that he didn't reveal the plan to Jodie, Camel, or anyone else in the FBI, because "to trick one's enemies, one needs to trick friends." While he expected Bourbon to come after him after his appearance on the Bell Tree Express, Shuichi didn't expect Bourbon to bring his colleagues from the secret police, but Conan did. This leads him to conclude that Bourbon's grudge against him was deeper than he had thought.

Shuichi is interrupted by the sudden arrival of Mitsuhiko, Genta and Ayumi, who came to ask Subaru for the solution to one of Agasa's tricks. After Subaru explains the trick, he informs Jodie and Camel that Kir had sent a message to him, "RUM," meaning that a Black Organization operative is on the move—Rum, the boss' right-hand man, who is even more important than Gin.

Elsewhere, Bourbon tells Vermouth that his theory about Shuichi was wrong, and Shuichi really is dead. He suggests that she continue to cooperate with him in his future missions, threatening to reveal her secret relationship with the boss—a secret that could surprise the rest of the organization. They also talk about how Gin is on guard against spies because he encountered three of them in quick succession—Shuichi, from the FBI, Ethan Hondou, from the CIA, and Scotch, from the Japanese Secret Police. Scotch was killed before his true name was discovered.

Shukichi Haneda is competing in a shogi match in Yamanashi province to win his 7th shogi title which will earn him the title Meijin. A message was sent to him, and threatens him that Yumi Miyamoto is in the culprit's hand. To save her, Shukichi rushes to Tokyo during his break time and run into Conan, the Detective Boys, and Agasa at a shrine.

Conan, on the other hand, is called by Masumi, who invites him to visit. Conan refuses, because he is on his way to visit the shrine where he eventually runs into Shukichi Haneda.

Shukichi, the Detective Boys, and Agasa are still searching for Yumi's whereabouts through the culprit's clues. A flashback showed how Shukichi and Yumi have met. The culprit is playing shogi with himself, with Yumi lies near him, bound and unconscious.

Conan deduces the location of the culprit and Yumi. The unknown child fall asleep watching the shogi match. 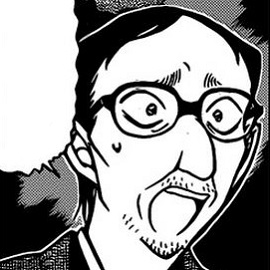 The kidnapper's face revealed to be Tanimori.

The motive for the kidnapping was Tanimori's wife, Keiko, who has died on illness.

Shukichi and the group confront the culprit at the hotel Masumi is staying. The culprit once lose a shogi match to Shukichi due to rule technicality, and believe he could win the match, game-play-wise. Shukichi proves that the culprit overestimates himself and he will indeed lose, and he surrenders to the police.

Yumi kisses Shukichi as a good luck charm after waking up. He returns to Yamanashi in time to win his 7th shogi title. Yumi is still unaware of Shukichi's real profession.

The unknown child is happy at the result of the shogi match. Subaru Okiya also interests in an article about Shukichi winning all seven crowns.

Anime Episode 787-788: The Mystery Sinking in the Midsummer Pool

Masumi Sera and the unknown child are waiting for Conan to visits them in their hotel room. The unknown child expresses her concern of trusting Conan, even though she thinks he is bright enough. They want to meet him alone but Ran and Sonoko come along, hoping to swimming in the hotel's pool. Any plan to talk with Conan is put on hold and Masumi follows Conan's group to the pool.

At the pool, they met an acquaintance of Sonoko who work as a secretary for the company owning the hotel. With him, his fiance, the company president's daughter, her step sister and the hotel manager.

Inspector Megure and Detective Takagi arrive at the scene to investigate the murder. The victim cause of death is drowning, and she died between noon and 1 p.m.

The receptionist's and the 3 suspects testimonies reveal that each suspect took turns to visit the victim alone when she searching, but only the manager claim to found her. In order, the manager at 12:05. the fiance after him, and the sister, who come back and ask the reception for time, 12:54.

Conan and Masumi deduce that the glass shards were part of an aquarium from its shapes. They also found fishing line on the grate cover the pool's drain, and a hook above it. The bell boys mention having heard weird noise and saw big bubbles forming in the water.