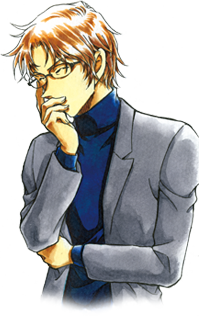 Subaru is left-handed and greatly admires the deductive power of Sherlock Holmes. He is also an excellent detective as he was able to solve several mysteries including the paper airplane case[4], the Ikkaku Rock case[5], and the 13 red shirts mystery.[6], although he seems to possess more of Mycroftian personality when it comes to cases. He is also shown to be calm in crisis situations and quite skilled at hand to hand combat, capable of knocking a knife out of someone's hand[7] and easily knocking out a kidnapper without so much as ruffling his clothing.[8] Subaru also knows how to enable the tracking function of Conan's glasses and that they track the detective boys' badges despite the fact Conan has never used the glasses in front of Subaru.[8]

Subaru knows Jeet Kune Do. He demonstrates that he is skilled in hand to hand combat when he knocks away the knife a culprit had been using to hold Ayumi hostage with one hand and rescues her from the culprit's grasp in the same quick movement.[14] He also easily knocks out a kidnapper without so much as ruffling his clothing, although he later comes up with the excuse that he found the kidnapper passed out near the stairs, most likely from losing his footing.[8]

Subaru Okiya hacked into Kogoro's computer to see what cases he had received from his website[15]. Later he hacked into Haibara's Phone and saw the message that Vermouth had sent her. [16]

Jodie and Camel are shocked to learn that Shuichi can cook

Subaru is a good cook,[17] although he describes his own cooking skills modestly

672-674) - Subaru probably heard via listening devices Conan had been kidnapped but Agasa's car was in for repairs, so he brought over some cream stew as an excuse to get involved

He also learned from Yukiko to be a very capable cook. This was meant to help better keep a low-profile as Subaru.[18] At the same time, he would often uses his dishes as an excuse to interject himself into cases at Professor Agasa's house.

As Shuichi Akai, he arranged to be hit by Akemi Miyano's car, in order to meet her in order to infiltrate the Black Organization. He was hospitalized after the hit.

He may have known how to do it, with less damage to himself, but he was still hit by a moving car.

Shuichi is a skilled driver. He can overtake many cars quickly in heavy traffic conditions and drift around a U-turn.[19]

Shuichi learned how to act and properly apply his Subaru disguise by himself thanks to Yukiko Kudo and equipment from Professor Agasa.[20]

He apparently at one point held a part-time job playing the accordion, making decent money from it.[21]

In addition to his native language, having worked in the United States as an FBI agent for a long time, Shuichi is also fluent in English, but he is half English.

This episode is a pre-story to Movie 24.

Subaru is first seen discussing with Conan about the kidnapping incident, which is similar to the WSG kidnapping incident that occurred in Boston, USA, 15 years ago. When Subaru chase a VIP from England who was kidnapped, he is seen been attack by Masumi and Mary. He remove his disguise as Subaru as the disguise is broken. He is also seen towards the end of the movie back into his car with his disguise, unknown that Mary hides in his’s car and points the gun to his head and threatens him and the FBI as they risked the life of an important VIP. After that, he smiles at her and reply her as she calls him brat.

Conan trusts Subaru since he knows his real identity, and they maintain an amicable relationship. Conan easily lends Subaru the keys to his house.[2] Conan also trusts Subaru to help in cases that put him in close contact with both Ai Haibara and him, like switching out the gasoline in a container for water to solve a case,[36] or calling him to pick up everyone when Agasa’s car broke down.[37] Subaru respects Conan and his intelligence and they both can solve cases at about the same level. Conan tells Haibara he is trustworthy because he is a fellow Sherlock Holmes fan, much to her annoyance. Subaru is one of the few characters who knows Conan is Shinichi after confirming his earlier suspicions by listening to Conan make a phone call as Shinichi.

Haibara's opinion changes, however after Subaru consoles her when Conan is being abducted by a culprit in a crime. It is revealed afterwards that this is because what he said was similar to what Shuichi Akai had once told her when he was the lover of Haibara's sister, Akemi Miyano. Because of this, Haibara gains trust in Subaru and starts calling him by his first name.[38]

Masumi Sera is Shuichi Akai's younger sister. To avoid disclosing his identity, Subaru tried to avoid acting conspicuously in front of her. During the Mystery Train case, he carried the unconscious Masumi back to her room. As he was about to leave, Masumi mumbled 'Shuu-nii' in her sleep, and that made him smile. In the movie Dimensional Sniper he was seen leaving the hospital, where Masumi was hospitalized after getting shot, hinting that he was visiting her. While she was unconscious, he left a bouquet in her room, which Ran and Sonoko find. During the Antique Facet Case, when he realize Masumi showing suspicious movements around Agasa's house, he shows up and keep an eye on her. He realize that Masumi was trying to pressure Haibara. He ended up by interrupting her investigation to prevent Masumi get involved into dangerous situation.

Hints that Okiya was Akai

Hints that Subaru Okiya was not Bourbon or another character

The only people aware of Subaru's identity as Shuichi Akai are Conan, Agasa who made the voice changing choker, Yukiko who came up with the disguise, Yusaku and the members of the FBI. Bourbon suspected Subaru for a while and finally confirmed it in episode "The Unsolved Cocktail Case". Kaito Kid also knows something is going on, after taking a photo of Subaru with his voice changing chocker showing, but probably doesn't care much due to its irrelevance to his life. Haibara and Masumi are also more suspicious about Subaru's secret identity.