The Mysterious Passenger (謎めいた乗客 ,Nazomeita Jōkyaku?) is the 230th and 231st episode of Detective Conan anime.

Gin and Vodka are at the "Polestar", a high end bar with a live music act. They just wrapped up a meeting with an unfortunate client who walked out with a happy face, not knowing he just had his final drink. Vodka notices that Gin seems enamored by the songstress onstage and praises her voice. At that moment, a waiter delivers two dry martinis to their table, stating that they were from the diva. Vodka accepts them with pleasure, but before he can drink, Gin snuffs his cigarette out in the martini and demands to know what kind of game the waiter is playing. Before the waiter can reply, Gin slams the waiter's head to the table and attempts to spear him with an icepick. The waiter jerks out from Gin's grip, leaving his latex mask behind. The waiter is actually a woman in disguise: the Black Organization agent Vermouth.

Vermouth explains that she was just teasing the two men who were besotted with the singer. Vodka worries that the commotion might have attracted unwanted attention because Vermouth is also a famous actress going by the alias Chris Vineyard. Vermouth reassures him that everyone is too focused on the diva to notice them.

Gin then asks Vermouth if she found "the one" she was searching for, and Vermouth replies that she hasn't. Vodka tries to ask for clarification, but Gin tells him it's useless because Vermouth loves keeping secrets. Her catchphrase is "a secret makes a woman, woman" because a touch of mystery gives a woman her allure. Gin finds her secret-keeping habit repulsive. In return, Vermouth asks if Gin has found Sherry. Gin says that no traitor can hide from him, and that soon enough he will make both Sherry and the man who protected her at the Haido City Hotel taste true fear.

Meanwhile, Conan and the Detective Boys are taking the transit bus to a ski resort where they meet Araide and Jodie aboard the bus. Conan felt bored and awaited encounters with Black Organization. Immediately afterward, a suspiciously looking man approached the back seat, but Haibara disregarded, saying the Black Organization members carry a unique smell, which prompted Conan to smell on Haibara herself and earned an annoyed look from her. However, afterwards, Haibara is able to sense that Vermouth is on the bus and hides herself to prevent her from being found. Soon after, the bus is hi-jacked by two armed men who use the passengers as hostages.

Conan tries to coordinate with the others and use his gadgets, but is caught by the busjackers every time. He then realizes that one of the three passengers in the back seat is an accomplice of the armed men and is somehow informing them about the passengers' behavior. Conan observes them and notices that one woman is chewing bubble gum, the middle man has some sort of ear piece, and the final man is wearing a mask and coughing often.

The bus hijackers demanded the police to release their boss Kunio Yashima, who was previously arrested from a jewelry robbery case. To project the hostages, the police conceded.

Conan investigates the ski bags the robbers placed in the center of the bus and realizes they contain explosives. Conan then tries to call the police with the earring phone but the spy robbers catch him and take it away. Conan was surprised that the robbers notice and that robber couldn't have notice him with something would cover the view realize that the passenger in the back must be a accomplice.

Show spoilers »
Conan figures out who the accomplice is. When the bus enters a tunnel, the armed men force Araide and a passenger named Shuichi Akai to wear the ski gear the hijackers were wearing. The hijackers then use Miharu Tomino, a woman chewing gum as a hostage and proceed to leave the bus. 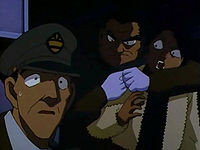 Miharu Tomino is the hijacker's other accomplice.

Conan reveals that Miharu Tomino is an accomplice of theirs and that they plan to detonate the bombs in the ski bags once they are off the bus.

The Detective Boys are able to inform the driver to stop suddenly which allows Conan to apprehend the criminals. Tomino accidentally activates the bomb giving them a few minutes before it detonates. The passengers leave the bus but Haibara remains seated in the bus.

Haibara plans to die in the explosion and subsequently prevent the Black Organization from finding her and harming those around her. Conan rushes back in the bus, grabs Haibara, and escape through the back window of the bus before the explosion occurs.

Conan covers Ai's leg with own his blood to trick Takagi into taking Haibara to the hospital and away from the Black Organization member who was on the bus while Conan told Ai not to run away from fate. Araide notices Conan's ruse and inspects his bleeding arm. Shuichi Akai is seen reporting to an unknown person and informing them that the target has not appeared.

Manga version
Vermouth: (to Gin) So, how about tonight? Want to make some martini?
Vodka: Martini?
Vermouth: Don't you know? It's gin and vermouth mixed.
Gin: Heh. Mixing black and black will only give you black.

Anime version
Vermouth: (to Gin) Hey, let me ask you one thing. Have you found the kitty that got away?
Gin: No, but I certainly will. My nose can always detect the scent of a traitor. I'll make her taste true fear... and it'll be the same for the guy she is with.

For the full gallery see: The Mysterious Passenger/Gallery