(Ran's towel falls off and Conan gets a severe nosebleed.)

Yui Uehara responds to the scene and concludes Masaie was bludgeoned and drowned. Everyone worries it may be the Red Woman, but Uehara assures them it can't since her death was confirmed 15 years ago along with Satoko's death in the bog, her name was Komayo Takeno. Later, the murder weapon is shown to be a dumbbell, and Masumi noticed salt in the tub. Conan and Masumi confirm their deductions, then a blackout occurs and Sumika is attacked by the Red Woman, leaving both detectives confused.

After attending to Sumika's injuries, Uehara learns Masumi spent 3 years in the US; she returned to Japan and in her head says "to meet the wizard once more" while looking at Conan. While Uehara investigates the cabin, Inspectors Kansuke Yamato and Taka'aki Morofushi (Komei) look into the original Red Woman case by talking to the original officer on the case. Reviewing timeline of Satoko's and the Red Woman's deaths, Satoko was found with a red coat and the 'Red Woman'. Yamato calls to warn Uehara that something dangerous is in the woods, but the call dies from a storm. 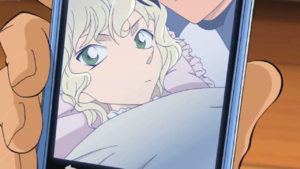 The child on Masumi's phone.

Conan and Masumi affirm their deductions and prove Sumika Kawana was the one who killed Masaie by bludgeoning him and hiding him in the tub. She used a bat and a fan to create the sounds of a vacuum to sound like Masaie was upstairs when he was already dead. Conan also shows that tomatoes don't float unless there is alt mixed in with the water. By adding more salt, she exposed the tomatoes and the body creating an alibi. Masumi also points out that she was the woman in red they saw on the way to the cabin as she handed Masumi the photos from earlier to investigate without hesitation while the other thought she was a boy. She killed Masaie because he had Satoko play the Red Woman for a prank, and she fell into the bog and died. But since she killed Masaie, who attacked her? The real Red Woman appears, but Yamato and Morofushi arrive and take her away. The woman who attacked Sumika was Shinobu Kagawa, the mistress of the man killed by the Red Woman, because Sumika was dressed as her. She might also had drove Satoko into the bog twelve years ago, because Satoko also had been dressed as the Red Woman and was perhaps mistaken for her. Conan later finds Masumi's phone and a young girl with Akai eyes is with her.

Anime Episode 759-760: The Romance Novel with the Unexpected Conclusion

Following their return to Beika, Masumi explains to Ran and Sonoko that a good friend of her dad's is paying for her stay at her hotel. Conan silently questions the photo of the little girl with Masumi since she said her only other siblings are her deceased oldest brother and a second older brother. They visit her hotel and run into a romance novelist, Hiura, writing his latest book, and his assistant, Chiaki Minazuki, is murdered.

File 877 - The Girl Who Resembles Sera

Immediately, Conan and Masumi know the culprit is the novelist Keigo Hiura and prove he used his suitcase to stuff her in after strangling her. He killed her because he thought she was trying to extort money and fame from him. But the truth was much different. The victim was the fan that had send Hiura the short story that his latest novel was based off. The code behind 'the sea, the phone and I' meant 'I love you', meaning that the person in the story communicated with the heroine was probably her future lover or husband. Using the same code with the victim's name get 'June Oota', the name of the fan. Sera concludes that the victim had been hoped that Hiura would figure out her identity, once he learned the code. Hiura realize what this means and breaks down realizing that he killed his assistant for the wrong reason. After Hiura is arrested, Conan's bug on Masumi is destroyed and the little girl from Masumi 's photo comments on Conan still having a long way before earning her trust. Masumi is then told to say, should she be asked, that the little girl is her little sister from "outside the domain".

The man with the white rose pinned to his shirt (Yakumaru) is actually an undercover Narcotics officer and knew the where and when of the transaction. Narcotics officers then arrive and arrest the guilty parties.

Conan, the Detective Boys and Ran go and visit an aquarium. However, Professor Agasa is still not there! Conan deduces that he has secretly gone to a fast food restaurant to eat yakisoba buns, because Haibara has put him on a diet. He is right, and Haibara angrily text the professor asking him, how long he intents on eating. Then, Genta decides that he wants that for lunch and asks if they could eat some. Fortunately, Ran knows that there is a cafe which sells cutely decorated children's dishes. Having said this, Genta wonders if Ran has come here before. At this point, she remembers the time when she and Shinichi came here, apparantly, less than a year has passed since they last came. She secretly wonders if Shinichi was in love with her at that time.

Ran's mind is then transported back in time to the day she was late coming to the aquarium. Shinichi complained about her making him come and being late herself. Ran had come up with a plan called the "Great Aquarium Reunion and Love Revival Plan". Shinichi apparantly came up with the setting of this reunion and Sonoko had come with the name of the plan. However, as they carried on talking about who Ran was texting and other things etc., Shinichi suddenly ran off into another direction whilst telling Ran to call for help. Shinichi had "smelt" out a dead body among the busy crowd of people looking at the sharks. This is where the main murder begins. The victim was killed with a knife enclosed in paper bag. Ran asks how Shinichi had known that there was a murder. Shinichi answered: 'By the scent'.

The Secret Report is a booklet that was bundled with Shōnen Sunday #33/2013 in Japan as well as printed at the end of Volume 83. In it there are some background information regarding the main characters and an interview with Gosho Aoyama. It also contains rough sketches and early drafts.[2]