Genta Kojima (小嶋 元太 ,Kojima Genta?), also known as George Kaminski in the English dub and manga, is a character in the manga and anime franchise Detective Conan. 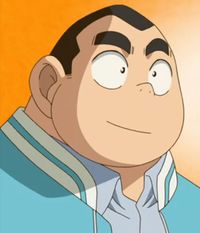 Genta Kojima is a student in Teitan Elementary School when Shinichi joins his class as Conan Edogawa. Shortly afterwards, he and his classmate Ayumi decide to investigate an apparently haunted mansion, and they persuade Conan to come along. When their friend and classmate Mitsuhiko expresses his skepticism about supernatural hauntings, Genta forcefully 'persuades' him to tag along as well. As it turns out, the haunting is a cover-up for an old homicide case.

Soon after, the accidental acquisition of a treasure map leads Ayumi, Genta, Mistuhiko and Conan on a hunt for a cache of stolen Italian gold coins, during which Conan saves them from getting killed by the mafia members who are also after the gold. After the case is resolved, Mitsuhiko joins Genta and Ayumi in forming the nucleus of an amateur detective group, the Detective Boys.[5] Genta is quick to pronounce himself the leader of the group, but his lackadaisical leadership abilities are commonly neglected in the field, and in fact everyone (even Genta) unconsciously views Conan as the group's actual leader. Genta's school shoe locker is used as a mailbox for any of their fellow students to present them with a case to solve.

Genta is apparently an only child living with his parents, who run a liquor store called "Kojima Liquors". He also has an uncle who lives in Gifu.[6]

Genta is the self-proclaimed leader of the Detective Boys. He loves food, especially braised eel on rice, and can eat more than all the other Detective Boys members combined. When discussions of money come up, Genta tends to think about it in terms of how many eel bowls he could buy. He also tends to mess up certain Japanese terms with similar-sounding words (especially if the latter are related to food) and sometimes has trouble reading even the most common Kanji, which on occasion causes some ridicule from his classmates and friends. His brash personality, lack of awareness of his surroundings, and tendency to not think before acting often lands the Detective Boys (or at least himself) in sticky situations.

Even though he is brash, outspoken and can be intimidating, Genta is actually very kind and dependable. He is a good friend of Ayumi and Mitsuhiko, and has been shown to greatly admire his father, who is considered to be a classic "Child of Edo".

Genta clearly has a crush on his teammate Ayumi, and as a result he, along with Mitsuhiko, is rather jealous of Conan because she likes him the most. He and Ayumi have been friends since pre-school.

Genta and Mitsuhiko are generally on very good terms with each other, and are also just as mutually jealous of Conan whenever Ayumi decides to give him her full romantic attention. However, the two do not feel rivalry with each other, likely because Ayumi treats them both only as friends.[10]

Genta's relationship with Conan is multi-faceted. While he generally admires Conan for his intelligence, courage and expertise, in his brashness he frequently attempts to promote himself as the leader of the Detective Boys. He also tends to become very jealous of Conan whenever Ayumi has set her romantic intents on him.

Genta initially expressed some interest in Ai Haibara, but while his interest has cooled off somewhat because of her adult-like manner, the two generally remain on a good standing with each other. Nevertheless, Genta sees her as one of his friends and does not hesitate to help her when the situation demands it.

eBookJapan held a character popularity poll from April 12, 2011 to May 12, 2011 in which readers of Detective Conan (international included) could vote for their favorite character. Genta placed 23rd in the poll with 19 votes out of the 5,883 that were cast.[11]