Agasa takes the Detective Boys to his uncles house which has been abandoned fifty years ago for a treasure hunt he had set up. Conan finds a 1 yen coin and reveals to Agasa that those coins were not produced until forty years ago and that someone had been living in the abandoned house. Conan investigates and finds evidence that an old man who spent his spare time carving coins lived in the house. Conan notices that someone has drawn strange codes on objects throughout the house. The codes are symbols consisting of the moon, star, and sun. The Detective Boys manage to find their treasure and realize that someone had destroyed them all. Conan deduces that an unknown culprit entered the house in search of some kind of treasure and was angered when Agasa's riddles lead him to a box of toys.

Conan and the Detective Boys gather all the objects in the house with the strange codes on them and attempts to solve it. Agasa reveals that his aunt was receiving letters in the same code and that he had Yusaku Kudo decipher the message; He also reveals that when his aunt began receiving those letters, someone was looking through her mail. Conan realizes the symbols refer to Hiragana and that the culprit who was looking through Agasa's aunt's mail is the one who destroyed the toys and is searching for the treasure in the house.

File 113 - The Truth About the Treasure

Conan matches the symbols to the Hiragana table and reveals that the symbols in the objects direct to other objects in the room. Conan notices that the objects conjoin in the center of room and realizes it refers to the chandelier. Conan matches the markings on the chandeliers which causes a stairway to the attic to appear. The Detective Boys find a skeleton of an elderly man in the attic. Conan reveals that man was the one who created the code and was sending the mail to Agasa's aunt. Conan finds a 20 dollar plate used for creating counterfeit money and explains that the man was hiding from the person who forced him to create plates. The culprit reveals himself and says that he had been searching the mansion for the plate for many years and attempts to steal it from them. Conan however apprehends the criminal and he is arrested afterwards.

At the Baker Hotel, Mantendo gaming company reveals their new products, including a mystery game starring Kogoro as the player's assistant. However, Kogoro is hungover from the alcohol at the pre-release party the night before, and the alcohol names he mentions reminds Conan of his true goal, finding the men in black. At the coat check, Conan, Ran, and Kogoro encounter three of the game's developers: Hideaki Nakajima, who started the game project, Koji Ueda, who claims to have had the initial idea, and Hironobu Takeshite. Koji mentions that Hideaki is good at stealing from others, but Koji will be generous because he heard Hideaki is having trouble with creditors. 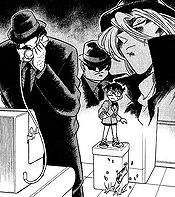 Kogoro trades in their belongings at the coat check, at which point Hironobu points out the time and he and Koji jump the queue to join Hideaki in checking their briefcases before the event starts. Ran notices that all three cases are identical, with the company logo, which was implemented by the director for brand awareness. The director appears and orders the developers to their places, right before Ran finally receives her cloakroom tag, 100, which she thinks is a sign of good luck.

In the display hall, Ran does well playing the various games. The developers invite Ran to participate in a strength-measuring booth with them. Hideaki gets a high score due to a history of boxing, and tells Ran it's good for releasing stress. Thinking of her frustration about Shinichi, Ran beats Hideaki's score by a wide margin. Conan passes on participating with the bathroom as an excuse, and Hideaki goes along with him. On the way, they bump into a large man dressed in black. Conan sees the man again on their way back, trading tag 98 for a Mantendo-employee briefcase. Conan is curious, but decides it's not his problem until he overhears the man start a phone-call by identifying himself as Tequila and promising to meet Gin and Vodka later. Conan is so shocked that he drops his coin wallet, and uses the distraction and Tequila's dismissal of him to sneak a bug-tracker on the bottom of Tequila's shoe. He tracks Tequila into the toilets and overhears him mutter to himself that something won't go in, but something else is open—and a moment later, the entirety of the toilet are is engulfed in an explosion.

File 115 - The Whereabouts of the Bomb

Conan runs into the scene of the explosion, followed by the Mantendo employees. He finds the shoe with his bug, confirming that Tequila is dead and his only lead on the organization is gone. As he tries to determine if Tequila was deliberately targeted, Inspector Megure arrives with an investigation team. Megure asks if anyone saw or knew the victim, which the employees deny but Conan confirms, adding that Hideaki bumped into him earlier, to Hideaki's shock. Conan adds that Tequila was from Kansai, as he used the dialect when he made a comment about a door just before the bomb went off. Directo Ishikawa also reveals a threatening note he had been sent recently, that'd he'd assumed was a prank until the explosion occurred.

An investigation officer brings Megure a key and the company emblem from a company briefcase, leaving Conan to wonder how and why Tequila had access to a briefcase checked into the cloakroom. When Conan sees how the emblem is bent backwards, he realizes the explosion had to have come from inside the briefcase. As the others try to determine if Tequila was an employee or a prospective client, Conan accidentally almost blurts out the existence of the men in black, but catches himself just in time. He concludes that Tequila's comment about the trouble he was having must have referred to the briefcase itself. Conan confirms with the cloakroom employee that only Tequila claimed a briefcase, meaning that the other party in Tequila's deal is still in the hotel and may be a potential lead on Gin and Vodka. However, the hotel staff don't believe him and the police won't let him interrupt Megure's investigating. Conan struggles, protesting that the murderer will escape, just before Ran finds him. She asks who he was looking for but is distracted by the cut on his face; when she pulls a handkerchief from her pocket it dislodges their cloakroom numbers: 96 and 100. Conan realizes that Tequila's number was 98, and thus had to belong to one of the three Mantendo employees who cut between Ran and Kogoro. As he ponders how Tequila was murdered, Conan realizes that deliberately murdering Tequila at the company presentation doesn't make sense, and it's also odd that Tequila's key didn't fit properly.

Eventually, the police find nothing and release the guests. As the Mantendo employees reclaim their briefcases, Hideaki's number is 124, which seems to surprise Hironobu and Koji. Koji advises the other two to check their briefcases, as they're so easy to mix up. As he observes the trio, Conan concludes that Tequila was an accidental victim rather than the intended one.

In order to solve the case before he can lose his only lead on the Organization, Conan shoots Kogoro with the tranquilizer dart. However, Ran gets in the way and the dart hits the cloakroom tags in her back pocket. Conan attempts to retrieve that dart, which she mistakes for a perverted grope; her retaliatory kick accidentally hits Kogoro, conveniently knocking him out for Conan to use as a mouthpiece.

Show spoilers »
As Kogoro, Conan calls attention to Hideaki's briefcase. Hideaki tries to keep the contents a secret, but when Koji wrestles for possession of it, the case accidentally opens. Hironobu yells and ducks for cover, revealing that Hironobu placed the bomb in the briefcase. However, Hideaki exchanged cases with Tequila using the cloakroom tickets for cover, as evidenced by the higher-number cloakroom tag compared to his colleagues, and Hironobu's bomb unwittingly killed Tequila instead. The reason Tequila's key didn't fit the briefcase was because Hironobu pulled the same briefcase switch, after cutting in line in front of Kogoro to get a tag of a similar number to Hideaki. The proof of the exchange is that the key Tequila had will fit Hironobu's current custom-Mantendo briefcase. Hironobu admits to making the bomb. He wished to kill Hideaki in revenge for the suicide of Yoshimi, the manager of the university boxing club and Hironobu's high school girlfriend, who committed suicide after Hideaki left the university club. Hironobu is led away by the police. Conan urges Hideaki to explain all he knows about Tequila and the Organization, but all Hideaki knows is that he met Tequila at a cafe, "Le Cocktail". While Megure fruitlessly tries to make Kogoro explain who or what "the Organization" is, Conan rushes out to the building Hideaki indicated. However, by the time Conan rides the building's elevator to Le Cocktail's location on the top floor, a huge explosion utterly destroys the cafe and any evidence within. Conan eventually learns that Hideaki's deal was receiving a large amount of money in exchange for a list of the world's top programmers, but Conan does not even know what happened to Gin or Vodka. The case remains a mystery unresolved.

Tequila wants the list of genius programmers around the world, but is killed by a bomb.