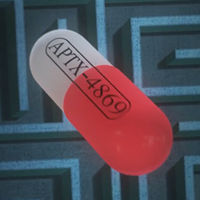 APTX 4869 (四八六九 ,Yon-Hachi-Roku-Kyū?), nicknamed "Prototype Detective" by members of the Black Organization, is a fictional toxin and derivative of an experimental formula of unknown purpose developed by Shiho Miyano, which is used by the Black Organization as an untraceable, lethal poison. Right now, there is a prototype antidote for it made by Shiho. 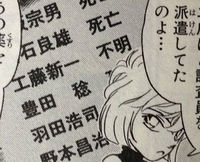 Haibara recalls a list of all of the victims APTX was used to kill. Only Shinichi's death was unconfirmed.

APTX is an abbreviation of "Apoptoxin," and, as the name implies, it involves the activation of apoptosis: the mechanism by which cells kill themselves. APTX contains ingredients which have other functions as well. It contains a component which activates telomerase: an enzyme which lengthens the caps at the end of DNA whose length limits the number of times a cell can divide.[1]

In practice, most of the time APTX 4869 works as a lethal poison. Gin says it can't be detected when used, possibly indicating it leaves few traces that forensic examination could uncover. However, as said by Ai Haibara, a rare side effect can in fact de-age victims. When talking about her own and Conan's shrinking, she said that the side effect causes everything apart from the nervous system to revert back to a childlike state,[2][3] but the adult personality and memories remain intact.

Shinichi, the series' protagonist, was forced by Gin and Vodka to take the poison with the intention of killing him silently due to the police being around in Episode 1. Later, Shiho Miyano was set to be executed for being a possible loose end after Gin and Vodka killed her sister Akemi. Instead of letting herself be murdered, Shiho took her own poison intending to commit suicide; however, her body was reverted back to a childhood state like Shinichi's.

Atsushi Miyano and Elena Miyano joined the Black Organization as researchers around some months before Shiho Miyano was born[4] and started developing APTX 4869. Vermouth may have hinted that there was an earlier project that the Miyanos assumed control over when they joined,[5] perhaps the one Shiho implied was at least 50 years old.[6] Regardless, the pair worked on APTX 4869 until they met their untimely deaths in a laboratory fire[7] which destroyed much of their research, leaving their daughter Shiho Miyano behind and the project in an unfinished state. The Miyano parents' version of the APTX 4869 was used to kill at least one person, Kohji Haneda who was murdered 17 years ago and included on Shiho's list of APTX victims.

Shiho was then groomed to take over their APTX 4869 research project.[8][9] She was educated overseas in America[8] before returning to Japan at or before she was 13[10]. Shiho advanced the drug to the point where she observed at least one of her lab mice reverting in age.[11] She was also ordered to test the most recent, yet still incomplete, version of APTX 4869 on Ki'ichiro Numabuchi, a failed assassin. Shiho received the data about him, but he managed to escape the Black Organization before she could test it on him. The drug was still considered incomplete by the time it was used on Shinichi Kudo[12], but Pisco implied that Shiho had advanced it significantly since her parents' tenure[13]. Shiho boycotted her work, when she couldn't get any answer to why her sister had died. To die by her own hand, she used the poison and ended up getting shrunk, which made her able to escape. It is unknown if the Black Organization has found replacement researchers to continue work on the APTX 4869 project after Shiho's defection.

Sometime during APTX's development, the Black Organization decided to use the incomplete form as a poison for stealthy murder, since it could kill without leaving a trace in the victim.

APTX 4869 is a pun on "Sherlock Holmes". 4869 can also be pronounced "Shi-Ya-Ro-Ku" (シャロク Sharoku)[14], which translates into Sherlock. Adding to the pun, the password for the APTX data is "Shellingford"[15], an unintentional misspelling of "Sherrinford", which was the name Arthur Conan Doyle called his detective character before deciding on "Sherlock".[16] The password and the pun name seem to be related to why several members of the Black Organization call APTX 4869 the "incomplete detective",[17][18] implying APTX 4869 is not finished yet.

Throughout the series there are several instances in which the APTX was temporarily neutralized and Shinichi and Shiho were returned to their actual age forms. The main ingredient for this reversal is a component found in baijiu, which Haibara has already incorporated in a prototype antidote for the APTX.[19]

Conan and Haibara briefly reverted to their true age while having rum cake (thought to contain among other things baijiu) in the live action drama Shinichi Kudo Returns! Confrontation with the Black Organization.

At first, it was revealed by Gin that the APTX 4869 was a poison to kill people who know too much about the Black Organization. Shiho Miyano said that she didn't intend to create a poison,[20] which suggests that APTX 4869 was originally developed with a different goal in mind. It probably was just a useful side effect that the current prototype kills while leaving no trace in the victim’s body, and was thus employed as a poison—a usage which Haibara detests.[20] Additionally, APTX 4869 is nicknamed the "incomplete detective" by the Black Organization,[17][18] which means its true purpose has not yet been achieved.

One possibility is that the goal of the APTX 4869 is to develop a therapy which will cause immortality, stall or reverse the effects of aging, or extend a human's lifespan. The de-aging effect that occurred when Shinichi and Haibara took APTX 4869 probably indicates the main intent of the drug's development. After Pisco saw Haibara shrink back to her child form, he commented that he was impressed she had developed the drug to that point, implying that deaging is in the right direction.[21] Supporting this is Haibara’s line, "Kudo-kun? You would probably never even dream that you are already part of a project the Black Organization has been working on already for half a century."[22] APTX 4869 is the only known intersection between Shinichi and the Black Organization; meaning that Shinichi's de-aging made him relevant to the Black Organization's project.

According to Haibara’s description about APTX 4869[23], APTX 4869 activates telomerase, an enzyme which can increase the number of times a cell can divide, and therefore affect a cell's lifespan and “reproductive potential”. The goal of this might be to revert all non-neural cells to a "youthful", high reproductive potential state. Vermouth's unnatural youth is another indicator that the Black Organization may be involved in research towards extending lifespan, halting aging, or rejuvenating the body.

The goal of the antagonists in Magic Kaito is pursuing immortality, via the Pandora Gem, but the goal of the Black Organization, as confirmed in one interview with Gosho Aoyama, is NOT immortality.

The original purpose of APTX 4869 might be to raise the dead. Once when Conan asked Haibara directly what APTX 4869 was meant to do she replied, "It's a nostrum to raise the dead. I wonder if that answer is satisfactory?"[24] This formulation is later revealed to be a subtle hint towards Renya Karasuma, who is publicly believed dead and evidently strives to use the APTX to rejuvinate his body.

In a flashback, Shiho recalls the end of the recorded message left by her mother which revealed Elena had been working on "a truly terrifying drug" the Miyano parents called the Silver Bullet.[25] It is unclear whether Silver Bullet is the Miyano parents' personal nickname for what is currently called APTX 4869, or if it was a closely related project they developed in parallel. Whatever the case, the Miyanos' Silver Bullet drug and Shiho's APTX 4869 are probably closely linked if not the same in-development drug.

Haibara took over her parents' research after they died by reconstructing their work from surviving fragments after a lab fire which supposedly killed her parents.[26] One of these projects was the APTX 4869 project. Proof that some version of APTX 4869 existed in the Miyano parents' time lies in a death list which includes the name of a man killed with the drug 17 years prior to the current timeline. Because Shiho had to reconstruct her parents' research from the fragments that survived, intentionally or unintentionally, it's possible that some of what the Miyanos called the Silver Bullet became incorporated into Shiho's modern version of APTX 4869.

Regardless of what the parents' version of APTX 4869 was intended for, those characters who know about the shrinking side effect of Shiho's modern version of APTX 4869 have a tendency to compare it to the Miyanos' research. After watching Haibara shrink, Pisco, who knew about the project the Miyanos worked on, commented that Shiho's parents would be proud of the progress Shiho had made on the drug.[27] During her recollection of the tapes, Haibara was holding and considering the antidote to APTX 4869. She then regrets that she didn't understand the drug was something that should have never been made, strongly implying she had worked on the same drug as well.[25] Lastly, Vermouth, who opposed the Miyanos' research seems to have transposed her distaste onto Shiho's research and Shiho herself.[28]

It is also notable that Vermouth has been a part of the Black Organization long enough to have heard the Miyanos use the name "Silver Bullet",[29] and may have given Conan the same nickname in reference to his deaged state caused by the drug. On the other hand, Shuichi Akai also has the nickname Silver Bullet, but no apparent connection to the drug other than dating Akemi Miyano, the sister/daughter of the drug's creators.