Voice changing bow tie has a megaphone mode as shown in File 998. 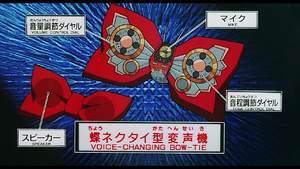 In most cases, Conan will use the bowtie to simulate Kogoro's voice; and less frequently Sonoko's to solve a case. However, in some unique situations, Conan used the bowtie to take other people's voices. The voice-changing function on the bowtie works by turning the dial behind the left bow to a different preset number. In the anime Episode 23, Conan mentioned in his inner speech that Kogoro Mouri's voice is stored in preset number 59. 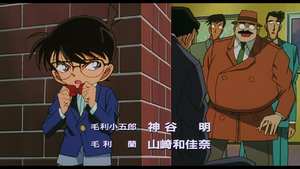 Below is a list of times in which Conan mimicked Sonoko's voice (usually knocking her out with his stun-gun wristwatch beforehand) to solve the case.