Mitsuhiko Tsuburaya (円谷 光彦 ,Tsuburaya Mitsuhiko?), also known as Mitch Tennison in the English dub and manga, is a character in the manga and anime franchise Detective Conan. 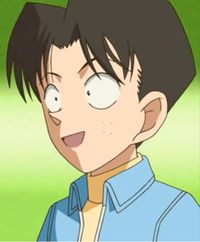 Mitsuhiko Tsuburaya is a student in Teitan Elementary School when Shinichi joins his class as Conan Edogawa. Shortly afterwards, his classmates Ayumi and Genta have the idea of investigating an apparently haunted mansion, and they persuade Conan to come along. When Mitsuhiko expresses his skepticism about supernatural hauntings, Genta forcefully 'persuades' him to tag along as well. As it turns out, the ghost story is a cover-up for an old homicide case.

Soon after, the accidental acquisition of a treasure map leads Ayumi, Genta, Mistuhiko and Conan on a hunt for a cache of stolen Italian gold coins, during which Conan saves them from getting killed by the mafia members who are also after the gold. After the case is resolved, Mitsuhiko joins Genta and Ayumi in forming the nucleus of an amateur detective group, the Detective Boys.[3]

Mitsuhiko's parents are both teachers, and he has an older sister, Asami Tsuburaya, about ten years his senior. Mitsuhiko doesn't like to eat carrot but be careful.[4] 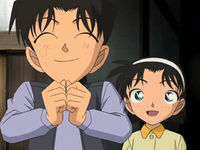 Mitsuhiko happy to have impressed Ayumi.

Mitsuhiko enjoys reading science books and takes a scientific approach to problem-solving. He is a smart and well-read first-grader who believes that technology can solve most problems. Due to his strict and formal upbringing by his parents, he tends to be very formal towards his elders, addressing them (in Japanese) with the formal suffix "-san" without regard to the intimacy of their relationship.[5]

It has been shown at numerous times that Mitsuhiko really likes to be prepared for any occasion. He enjoys studying scientific, historic and general subjects for his own interest and fun. This eventually allows him to provide useful insights whenever necessary. He's been (or felt) rewarded a few times for his knowledge. In one instance, Ayumi said how impressed she was after Mitsuhiko provided some precise historical facts behind the Ohashi House in Kurashiki, and he thought to himself with a big happy smile on his face: "I'm so glad I studied!".[6]

One of his other qualities is that he tends to be proactive in many situations and thinks ahead to possible outcomes. For example, while the Detective Boys were trying to solve riddles they found in a Momotaro container in a small river in Kurashiki, a murder occurred which eventually led to the different codes to get burned. Conan, knowing that resolving those codes would lead to concrete proof as to who the murderer might be, was quite pleased when Mitsuhiko proudly announced that he took notes in his Detective Boys notebook "thinking that something like that could happen".[6] He has often been shown as shrewder and more quick-witted than Genta and Ayumi, sometimes leading the investigation when Conan and Haibara aren't present.

Despite the preciousness of his intelligence, Mitsuhiko remains an elementary school child, and enjoys activities of his age, such as making a snowman or treasure hunting. As a consequence, he is best friends with Genta and Ayumi.

Mitsuhiko has a dislike for carrots, and will always eat them last (if ever) if he can help it.

After the Detective Boys have been trapped in a cavern, and after Conan has fainted, Mitsuhiko, hinted by Conan's last words and Ayumi's opinion, is the one to find the solution of the riddle leading to the exit of the cavern.

The Detective Boys realize that Mitsuhiko has been missing from his home for specific periods of time, and follow his trail to a forest in Gunma. Mitsuhiko, having heard Haibara and Ayumi expressing their admiration for the beauty of fireflies, wanted to please them by bringing them some. However, having caught a firefly, he realizes that he can't answer Conan's call on his badge without releasing it. He is eventually caught by the escaped serial killer Ki'ichiro Numabuchi who was also hiding in the forest. Since Numabuchi loves fireflies too, he does not hurt Mitsuhiko, and even carries him back to his friends. This case is a good example of Mitsuhiko's dedication for Ayumi and Haibara.

During the night, Mitsuhiko catches sight of the owner of the house sharpening a cleaver with a fiendish face; a vision which leaves him terrified. It later becomes an essential element of incrimination against the owner during the police investigation.

Noticing that both Haibara and Ayumi seem to be interested in Conan, Mitsuhiko asks Ran to meet with her at a café the day after. While they eat, Mitsuhiko tells Ran that he likes both Haibara and Ayumi equally, and asks her if that makes him a bad person.
When Haibara falls from the car in mid-air from Tower A to Tower B at the end of the movie, Mitsuhiko saves Haibara by taking her hand and tells her "I'll never let you go!"

As the cheerful and innocent girl she is, Ayumi has attracted the romantic interests of her teammates Mitsuhiko and Genta, but she is blissfully unaware of that. Her crush on Conan and tendency to innocently flirt with him leads to feelings of annoyance or disappointment on Mitsuhiko's part. According to Movie 5, Mitsuhiko seems to have liked Ayumi since kindergarten, and according to Magic File 2, they have been friends since at least preschool. 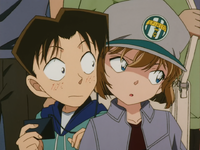 After Haibara joins the Detective Boys and replaced him as the second-in-command, Mitsuhiko develops a crush on her due to her intelligence and competence. To date, Ai hasn't shown any romantic feelings for him and uses his feelings to her advantage when she needs him to do something, but she also admires his intelligence and courage during missions. In some episodes, she even shows more confidence in Mitsuhiko than in Ayumi or Genta when the going gets tough. In some episodes, he notices that Ai and Conan interactions are more mature adults while she talks to Mitsuhiko and other Detective Boys like kids.

Mitsuhiko's relationship with Conan is a bit of a two-faced matter. While he generally admires Conan for his intelligence, courage and expertise, he tends to become very jealous of him whenever Ayumi has set her romantic intentions on Conan. He also suffers from being less shrewd and dexterous than him in front of Haibara.[11]

Mitsuhiko and Genta are generally on very good terms with each other, and are mutually jealous of Conan whenever Ayumi decides to give him romantic attention. However, the two do not feel rivalry with each other, likely because Ayumi sees them both as friends.[12]

eBookJapan held a character popularity poll from April 12, 2011 to May 12, 2011 in which readers of Detective Conan (international included) could vote for their favorite character. Mitsuhiko placed 26th in the poll with 8 votes out of the 5,883 that were cast.[13]

Mitsuhiko's name comes from novelist Yasuo Uchida's reporter character Mitsuhiko Asami (浅見 光彦 ,Asami Mitsuhiko?). His name in the funimation dub is named after the main protagonist of a popular TV show named Prime Suspect: Tennison and its sequel named Prime Suspect. The protagonist is Jane Tennison, one of the first female Inspector in London who gets promoted to the rank of Superintendent and who confronts the sexism in law enforcement.