Conan suspects that Mary is a member of SIS ("Secret Intelligence Service").

Show spoilers »
The culprit is Motoyuki Tojima since he is the only one with the crane's beak pointing at 2 o' clock when the bloodstain was at 10 o' clock. The real tray having the bloodstain from the victim's view was pointing at 2 o' clock angle, which when Agasa flipped it horizontally, the crane's beak was at 2 o' clock angle while the bloodstain is at 10 o' clock, which is perpendicular from each other. Conan tells that nor Sakamaki or Chono would have been able to kill the appraiser since swinging the spear for them would have caused the floor to creak and the appraiser to look behind and see the culprit. Tojima says that even it would have made noise, Nishitsu wouldn't have been able to hear anything since the aid wasn't functioning. This last sentence Tojima said proves that he is the culprit since he shouldn't have known that it wasn't functioning at the time unless he was there in the room with Nishitsu which makes Tojima confess that he didn't want to kill him. The motive for killing the appraiser and snatching the real tray was to cover up the cost of his daughter's operation which cost about 5 million yen while he thought his tray was fake and of no value. Subaru Okiya tells him that in fact, his tray was most probably a prototype made by apprentices and its value should be able to cover up the costs. Tojima bursts into tears as he realizes he had killed the appraiser for nothing. The real tray belongs to Kinji Chouno and he was willing to lend it to Sakamaki for her exhibition at a reasonable price. The proof that it was the real tray was because since Nishitsu was sitting in front of the real tray's box, the blood that would splatter from his head would have likely fallen into the real tray's box just in front of Nishitsu and the only box with blood spots inside is the old man's. After the end of the case, Sera questions Mary about the "50:50" catchprase. Mary replies that it is her catchphrase as well, and it's a line that her husband used to say and her son Shuichi inherited from him. Sera informs her mother that getting the drug at the moment is diffucult since Subaru is standing in her way, which surprised Mary. After learning the truth about the "50:50" catchphrase, Sera suspects that Subaru is Akai, but attempts to deny it since she thinks that her brother is supposed to be dead.

File 1040 - From Your Footbowl Loving Mother

File 1042 - The Jingisukan of Memories

Show spoilers »
Realizing Ran wants Shinichi to let Heiji win for the sake of their relation, Conan lets Heiji solve the case. He reveals that the culprit is Saisuke Jinya, or rather the person who is impersonating Saisuke Jinya who reveals that he passed away a few days ago due to an illness. The fake Jinya actually was friends with the real Jinya and had that burn mark since he had put citrus juice on his hand and got a sunburn. Conan, to prove it, drops lemon juice on the fake Jinya's arm which triggers him. It is also proven he is not the real brother since he didn't know that the four children got a burn after putting their hands on the pot to lift their mother's head who fell on it. Other evidences are that the fake Jinya's ears didn't match the ears of the other brothers as ears type are transmitted through DNA. The glasses the fake Jinya is wearing are in fact the ones from Hamana because Hamana had developped metal allergy (prooved by the fact he refused canned goods, chocolate and leather which all contained metal) and wouldn't be able to wear those metal-framed glasses he had on his body. Jinya put them on him because his glasses fell on the ground and smashed so he had to exchange them with Hamana's but couldn't see well evidenced by the fact that the scratch marks on the glasses Hamana is wearing don't match the impact of his fall. The only one with glasses is then Jinya who reveals that he killed Hamana by accident because he pushed him of the ledge while they were fighting for the mother's treasure which Jinya was longing for. After Jinya got arrested, Heiji tells the two other brothers that the treasure is in fact the Jingisukan wok that was in Hamana's bag because the mother wanted the kids to all have Jingisukan after her death to remember her. After this case is closed, Conan asks Heiji which family did that housekeeper work on. Heiji replies that she works for Haneda's family, Shukichi Haneda old house. Conan thinks that since Shukichi Haneda is the middle brother sibling of Shuichi Akai and Masumi Sera, and also non-blood-related brother of Kohji Haneda, suspect that Kohji Haneda could be the son of a rich and noble family.

The Birthday Party of Divine Punishment

Shukichi wanted to introduce Yumi to his mother, but is unable to contact her. After being told he didn't tell their mother that he is still alive, Shuichi reassures his brother that he will meet her eventually, once the mist that covers the Black Organization has been cleared up.

Settings featured in this volume:

Haido Port from the second case ("Lover Code") is practically identical to the real life Hinode Pier at the border between Minato (which it belongs to) and Chiyoda Wards in Tokyo, in turn also implying Haido Town to be around the border of these wards again. The warehouses on the right (and the one the case happens in) are the Hinode Pier Warehouses (Second block, Kaigan District, Minato Ward), in real life, the ones on the panel/photo are numbered 2-A, 2-B, 2-C and so on, but in this case, they are simply given numbers. Judging by their manga and real life succession, No. 4 (where the murder happens in) should correlate with warehouse 2-D.

The ship in front of the other one Ran Mouri, Kazuha Toyama, and Momiji Ooka photograph themselves in front of in the last chapter of the same case is the "Silver Muse" of Silverseas company, which actually passes (or passed, it seemingly moved to Canada afterwards) the Hinode Pier on its route when it arrives in Tokyo after leaving Yokohama to the north, just like it passed Haido Port during this case. 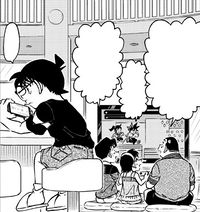 Covers in other countries