After having identified the victim they use his phone to track down three people who are at the same aquarium. His date, his ex-girlfriend and the ex-girlfriend's new boyfriend. All of them provides a phone video as an alibi. The date explains the victim might have been in some shady troubles, the ex-girlfriend says that the victim has kept bugging her with phonecalls and the new boyfriend tells that he was been bugged with strange e-mails, that he has deleted without reading, and is choked to learn that they are from his girlfriend's ex-boyfriend. 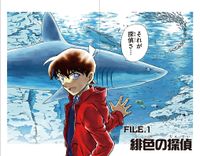 Shinichi in front of the shark tank.

The culprit is Naho Ojiro. Kunihiro was blackmailing her by getting her to pay him since he's neck is in debt or he would send embarrassing photos of her while they were dating to her lover, family and work place to humiliate her.

The Detective Boys are preparing for a kite flying competition. On the ride to the venue, the others take notice of Haibara, who seems to be in a good mood, listening and humming to a song through her earpiece. Conan tries to figure out what she might be listening to from Agasa, who only mentions about her recent obsession with a recent special on Higo and before he could spill anything else, Haibara stops him. Conan comes up with a plan, that is letting the recording function in the phone turned on and turning the display black, he gives it to Ayumi to slide it secretly in Haibara's pockets when she starts humming the song.

The rest of them manage to get the kite flying, but soon, the tail rips off and it ends up circling and crashes down. Right beside them, a man named Renno Ryouta, is preparing to fly his kite while talking with his wife, Renno Takami, on the phone. She seems to be mad at him, for having cheated on her. As Ryouta tries to denies her claims, a man standing beside him, Kakura Yuitoshi, mutters that the woman Ryouta cheated on, was his younger sister. She is lying in the hospital, having self-harmed herself due to relationship between Ryouta. Yuitoshi even claims that Ryouta's kite flying partner, Yatsukoshi Takeshi, also had a crush on his sister, and warns Ryouta about it.

Meanwhile, Ayumi spills out the Conan's plans to Haibara. She soon realises having lost the cellphone somewhere. They try to look up in front of toilet box, where Ayumi felt something felt down while taking down her handkerchief back then. But to no avail. They guess that the one who stumbled behind Ayumi after she came out of the box, must have picked it up. Meanwhile, Conan and others are dumbfounded looking at their broken kite, which is beyond repair. Just then, they hear shouts of Takeshi warning his partner, Ryouta, who was walking backwards with the kite in hand, about the cliff's edge. But by the time he realises, it's too late, and Ryouta falls off the edge into the Teimuzu river. Conan takes notice of the cellphone lying near the edge, whose call is still ongoing, and thinks this might not be an accident.

While Inspector Megure and Detective Takagi are quick to call it an accident, Conan explains otherwise based on the signs of the rope railing being tampered with. He points out to Yuitoshi, Yatsukoshi and the victim's wife, Takami as possible suspects.

Yatsukoshi tells that he works at the cafe runned by Ryouta. Yuitoshi was the senior to Ryuota and Yatshukoshi, in their high school baseball club. He mentions about Ryouta making a pass at his younger sister, eventually driving her to attempt to kill herself, and hence had warned him during the competition. He further says, Yatsukoshi also has a motive as well, since he too has a crush on his sister. Also Ryouta's wife, Takami had been furious after Yuitoshi had told her about her husband's affairs, so she had a motive as well. When asked why didn't he warn Ryouta about the cliff's edge, he said he was far away and also Ryouta had a plastic bottle tucked in his armpits, hence Yuitoshi guessed he might have went to the edge to throw it away.

Takami says she was there all the time in her home, and could hardly have made Ryouta fall down the cliff. She also denies having heard any other conversation besides their on the phone, but she recalls that Ryouta did mumbled now and then, and had told her to hold up the call for a moment once. The police looks on the competition footage and find no odd behaviour by the suspects.

Agasa informs Conan that his phone is lost. He tried calling it several times, after the ambulance took away the victim, and then it was switched off. Upon hearing this, Conan muses to himself with a smile.

The culprit is Takeshi Yatsukoshi. He was communicating with Ryouta using waterbottles as recpetion and kite strings. The kite string was tied to the bottles and he directed Ryouta towards the place where he had the tampered the strings with. The police along with the detective boys manage to corner him, making him give Conan's cellphone that he had picked up. As it was still recording, and he had placed it in his breast pocket, it recorded his last words to Ryouta, which are substantial proof. His motive was hatred towards Ryouta for going after his crush, that is Yuitoshi's sister.

Later that day, Conan watches a clip of the TV special of Higo in Yoko's interview, in which he reveals his new favourite song to be Yoko's Dandelion. Conan wonders if Haibara was listening to this same song.

Kogoro comes home having had a good luck at the Pachinko parlour. He sees the message at the door by Ran and checks his phone, which was switched off, to find many missed-calls and messages saying Eri is hospitalised. He rushes to the Haido city hospital, to find Eri recovered from the appendicitis surgery.

In the lobby outside, Kogoro and Conan run into Amuro Tooru, who seems to be asking around for a patient named Kusuda Rikumichi. Conan is unsettled upon learning this. He also takes note of the fact that Amuro reacted to the word "zero", when someone said it out loud nearby. Upon asked by Kogoro, Amuro says it was his nickname.

Meanwhile in one of the patient wards, Kousaka Juri is being visited by her group of friends, Beppu Katsuki, Happou Tokie and Sutou Reina, who brings in hot water and suggests holding a tea-party. While, having the tea party, Reina starts to flaunt her riches leaving a bad taste among the others. But suddenly she collapses on the floor, after taking a sip of the lemon tea.

The culprit is Juri Kosaka.

The culprit is Fumiyuki Kandachi. Kandachi misunderstood Natsuko's checking system, in Japan (✓) is marked for wrong while (O) for correct; since she studied in America it was reversed. Because she used this system, Kandachi was confused about the difference and struck her without thinking. Since this was an assault and not a homicide, Inspector Megure would show leniency, while another teacher runs in and says the hospital called to say Natsuko has taken a turn for the worse. Conan, Camel, and Jodie rush to the hospital and she just got out of a successful surgery. Amuro tries to antagonize Camel into saying something about Rikumichi Kasuda, but Jodie pulls him away trying to keep him safe. Only Camel lets slip how Rikumichi died after she asks, and she vanishes leaving Camel in a confused state. The Jodie he talked with was really Vermouth and she tells Bourbon what she just learned.