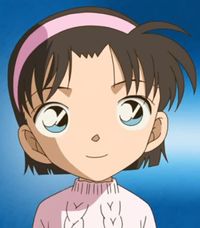 Ayumi has short hair, having some hair points sticking out on the side of her face and a hair band on the head usually pink. Furthermore, she has blue eyes and brown hair. She is considered very cute and often wears dresses.

Ayumi is a primarily naive and innocent little girl who enjoys adventure. She demonstrates courage as time goes on and acts as the group's cheerful spirit. She has an open crush on Conan, even dreaming about marrying him, which makes him uncomfortable. At the same time, Ayumi thinks that he has feelings for Haibara because he tries to protect her and she often sees them talking amongst themselves in private. Ayumi later becomes better friends with Haibara and she allows Ayumi permission to use the more informal term Ai-chan to address her.[3]

When on a case, Ayumi often makes simple observations that help lead to progress and resolution. For instance, she unlocked one of the codes from the Momotaro container the Detective Boys found in Kurashiki by deducing that it was most likely referring to one of the statues at the Oohara Art Museum: they had to walk 25 steps from the statue towards the direction it was facing.[4] She has an eye for noticing strange details in people's appearance, like she noticed that Taiko Mejin was shaved while dressed casually, while he normally made it grow when he is not wearing a kimono. 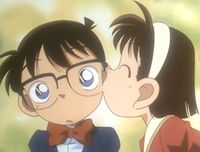 Ayumi was the first one, to try and befriend Conan, shortly after he became a grade schooler.

She has strong romantic feelings for Conan and sees him as a role model as well as an extremely reliable person she can look up to and may always count on.[11] Conan in turn is a bit unnerved by Ayumi's feelings, though he does respect her as a good friend.[12]