The Mystery Sinking in the Midsummer Pool

The Mystery Sinking in the Midsummer Pool (真夏のプールに沈む謎 ,Manatsu no Pūru ni Shizumu Nazo?) is the 787th and 788th episode of the Detective Conan anime.

Masumi Sera and Mary Sera are in their hotel room, waiting for Conan to arrive. Mary is questioning whether they can actually trust him even though she thinks he's clever, but Masumi assures her everything will be fine. She warns Masumi that if Conan is not worth their time, they will have to leave and find a new base of operations. After the warning, she hides in the bathroom as Masumi opens the door to welcome Conan in. Unexpectedly, Masumi sees him, Ran, and Sonoko standing outside, even though she told him to come alone. Ran and Sonoko came along with Conan because he told them she mentioned Hotel Hyde Pride had a pool. She tells the three of them to head to the pool first, and that she will come later; as a result, Conan's conversation with her and the child is unfortunately put on hold.

At the pool, Conan, Ran, Sonoko, and Masumi meet President Oiso's secretary Raito Samaki, a man Sonoko met with in a few parties. They also see the president's daughter, Nagami Oiso; Nagami's half-sister, Hamaka Oiso; and the hotel manager, Ensaku Toyoshima. These people are part of Oiso Finance, which is, according to Sonoko, a subsidiary of Suzuki Financial Group. President Oiso actually owns this hotel.

As Raito rubs oil on Nagami's back, Nagami loudly tells him, Hamaka, and Ensaku she knows their secrets. He and Hamaka are a couple, even though he is Nagami's fiance, and they are trying to take half of the president's fortune. Ensaku is secretly letting them use the hotel for their trysts. Before she storms off to tell her father about it, Hamaka tells her her necklace is missing. Thinking it fell while swimming, she angrily commands the manager to kick everyone out of the pool and orders Raito to bring her snorkeling equipment so that she can look for it by herself. After a while, she still could not find the necklace in the pool, so she takes the scuba tank Raito already prepared beforehand and tells him, Hamaka, and Ensaku, who were helping her search for the missing necklace, to get out of the pool. Conan, Ran, Sonoko, and Masumi, who already switched back from their swimsuits to their normal clothes, quietly watch them from a distance.

After lunch, the four of them were walking when Conan notices the hotel's bellboys looking excited about something. They learn from the three people who Nagami kicked out that she is missing. Suddenly they heard the bellboys say there is a person in the middle of the pool. Conan and Masumi rush to the pool to find out that person is Nagami, who already drowned.

However, when the bellboys looked in the pool ten minutes ago, nothing was there. As Raito carries Nagami's body and Ensaku carries the scuba tanks out of the pool, the hotel manager suddenly drops the tank back into the water after stepping on something. He looks into the water and tells everyone there are glass shards at the bottom of the pool.

After a while, Inspector Megure and Detective Takagi arrive to investigate the drowning. Based on the police reports, Nagami's time of death is between noon and 1 PM. According to the bellboys, they did not see anything in the pool until they searched the pool again and saw her body after 2 PM. When Conan and Ensaku told Inspector Megure about the glass shards, the police drained the pool immediately. Those glass shards were not in the pool when Raito, Hamaka, and Ensaku were helping Nagami search for her necklace. Conan and Masumi realize the glass shards form an aquarium. Later, the police find a fifty-meter-long fishing line stuck in the pool drain.

It turns out the secrets Nagami told everyone was just her misunderstanding. In fact, Raito, Hamaka, and Ensaku were planning to celebrate her birthday in this hotel, so they discussed decorations and food here secretly since they wanted it to be a surprise for her. After that was cleared up, Inspector Megure and Detective Takagi ask the three of them what they were doing when Nagami was searching for the necklace alone.

Inspector Megure and Detective Takagi take everyone to the reception counter. The two women at the counter tell them the only people who entered the pool after it was closed were Conan, Masumi, Ran, Sonoko, Raito, Hamaka, Ensaku, and the bellboys. After Nagami said she would search for the necklace alone, the first person to return to the reception area was the hotel manager, at 12:05. During that time, she was looking for her necklace, and it took a while for her to notice Ensaku was standing behind her. When she saw him, she told him he was interfering, so he left the pool quickly.

The next person to return was Raito Samaki. He was going to tell her let someone else find the necklace for her, but she was not at the pool. Thinking she went to the bathroom, he waited at the pool for a while, but he eventually left since she did not return. Hamaka Oiso arrived at the pool when Raito left, and she left the pool at 12:54. She asked the women the time as she left because she had a reservation for lunch in this hotel at 1 PM. While at the pool, Raito asked her to check the bathroom and changing room, but Nagami was not in any of those places. When she learned Nagami was not at the pool, she panicked and asked the women at the reception counter the time because she did not trust the clock in her cell phone.

After that, the women at reception called the hotel manager, Raito, and the bellboys, who split up at the pool to look for Nagami. They searched for an hour but could not find her anywhere, so they went to ask the receptionists if Nagami left the pool; that was when they met up with Conan, Masumi, Ran, and Sonoko.

When Conan and Masumi asked the bellboys why they searched the pool a second time, the two men tell them they heard the strange sound of big bubbles. They charge toward the drained pool and see that the drain's grate is screwed in place. There is also a hook exactly at the center of the pool wall and located directly above the drain. After seeing the hook and drain, they figure out who the culprit is.

Show spoilers »
The murder was committed by Ensaku Toyoshima. The motive for the deed was the death of his younger sister, her husband, and their three-year-old son in a car accident. They had one day rented the special suite Nagami Oiso liked so much for a night in order to enjoy the special view it offered, until Nagami selfishly laid claim to the suite for herself, forcing the family to go to another hotel. But on their way there, they became victims of a fatal hit-and-run accident... with Nagami Oiso riding the car which hit theirs. In order to avoid prosecution, she called Toyoshima and asked him for a false alibi, thereby inadvertently revealing herself as one of the culprits. 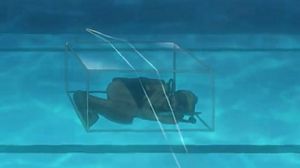 Reconstruction of the refraction trick used to conceal Nagami's corpse.

Toyoshima committed the murder while he was attending to Nagami alone, ripping off the mouthpiece of her oxygen tank and drowning her in the pool. In order to provide himself with an alibi, he had prepared the aquarium by fixing it to the bottom of the pool with a fishing line. The trick employed involved a natural light differentiation between the water surrounding the aquarium and the air left inside the container, thereby rendering the body optically invisible for anyone staring into the pool from above the water's surface.

When Nagami's disappearance was noted and everybody started searching for her, Toyoshima secretly cut the line, thereby releasing the aquarium and thus allowing the body to appear. Then, while retrieving the scuba tank, he secretly dragged the aquarium away from the pool's center with his foot, he dropped the tank onto it and thereby smashed it to pieces in order to conceal its original shape. The evidence for this is found on the fishing line, which Toyoshima had wound up in a coil, thereby leaving his fingerprints on it.

After the case was solved, Conan, Ran, Sonoko, and Masumi talk outside the hotel before they part ways. Sonoko comments that this case was just like what happened at the "Which Sweets Show"; in both cases, Masumi made people disappear and reappear out of nowhere. For this reason, Sonoko calls Masumi a magician; however, Masumi denies being a magician while making eye contact with Conan. The conversation about Masumi and magicians suddenly triggered a memory in Ran's mind. When Ran tried to ask Masumi if they met before, Sonoko unintentionally interrupts her because she called Masumi "Sera-chan", and so she was unable to ask Masumi that question. Masumi waves goodbye to the three of them, and they part ways. However, before leaving, Ran turns around one more time to see Masumi talking to her mommy, Mary Sera, who Ran thinks she had also seen before.

For the full gallery see: The Mystery Sinking in the Midsummer Pool/Gallery