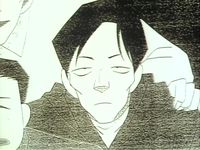 Ki'ichiro Numabuchi, who grew up in Nakanojō, Gunma Prefecture[1], was a serial hold-up murderer who got involved with the Black Organization. He was originally hired to become one of their assassins, but his mental instability soon exempted him from that career. Instead, he was to become a human guinea pig for the new APTX 4869 poison, under the supervision of Shiho Miyano. However, while Shiho had been given his file for close medical study, she didn't get to meet him personally. Knowing about his impending fate, he escaped the Black Organization. During his flight in the Tohoku, Kanto, and Kinki regions in three consecutive days, he panickedly murdered three people he suspected of being Black Organization pursuers.[2]

In his younger years, before becoming a murderer, he and his fellow classmates from Osaka driving school (Hidetoshi Nagao, Tayo Nishiguchi, Kazuto Noyasu, Sumie Okazaki, and Satoro Goshi) caused the death of their stern driving instructor, Tetsuji Inaba. Years later, his son, Yusuke Sakata, who had become a Tojiri police officer to investigate his father's death, caught him, who blabbered out a confession. Since his father's death case was long since time-barred, Sakata decided to murder all those responsible, keeping him for last in order to put the blame on him. However, Conan and Heiji cracked the case, and he was taken into custody by the Osaka police.[3]

Several months later, he was escorted into Nakanojō forest in Gunma after having claimed that the body of a fourth victim was buried there. Actually, he intended to pay a last visit to his special childhood friends, the fireflies, living in the forest before his execution.[4] There he met Mitsuhiko, who was attempting to collect some fireflies in order to rejoice his friends Haibara and Ayumi. Instead of doing him any harm, however, he carried Mitsuhiko back to the search parties and had himself arrested without putting up any resistance.[5]

While he may be cast as a psychotic serial killer, in the series he appears more like a frightened victim. While he may kill without hesitation, he does it mostly out of fear and to regain his freedom. He is shown to have a more sensitive side and a fondness for children when he rescues Mitsuhiko from an ill-fated attempt to present his crushes Ayumi and Haibara with a special surprise.[1]

Numabuchi was set to be a test subject for the APTX4869.

Numabuchi looks upon the fireflies from his childhood.

Numabuchi reveals to the police that he had killed a fourth person and buried the body in the wooded mountains of Gunma. Numabuchi is taken to the site under the supervision of the Inspector Misao Yamamura and the Gunma prefectural police to look for the remains. Numabuchi sees a moment where Inspector Yamamura's focus wavered and seizes the opportunity to escape from custody.
Coincidentally, Tsuburaya Mitsuhiko has also entered the forest in search of fireflies, not knowing a serial killer is also loose in the area. The Detective Boys who followed Mitsuhiko's trail arrive and join forces with Inspector Yamamura to reunite with Mitsuhiko and capture Numabuchi. While on the search, Haibara informs Conan that the Black Organization originally hired Numabuchi to be one of their assassins. However, due to Numabuchi's unstable mental state, he was transferred to Haibara's division, where he was to be a test subject for the APTX4869. He later escaped from the Organization and proceeded to commit various crimes.
Numabuchi eventually finds Mitsuhiko but safely returns him to his friends before he is compliantly arrested by the authorities. Conan states that Numabuchi likely lied about his fourth victim and instead wanted to come to the mountain, a place of his childhood, so that he could see the fireflies one last time before his eventual execution.