Morofushi's parents died prematurely, and while he remained in Nagano, his younger brother Hiromitsu was taken in by relatives in Tokyo and thus separated from Morofushi.

Morofushi first met Kansuke Yamato in elementary school.[1] Morofushi's exploits were so well known there that a book about a child solving a case in an elementary school, titled "Kōmei-kun from Second Grade Class A!", was based off of him (another character in the book was based off of Yamato).[1] Morofushi cherishes the book, keeping it in the glove compartment of his car, as the author was a friend of his.[1]

After (presumably) graduating from high school, Morofushi went to Tokyo to do a university degree, and finished top of his class. Then (presumably) he returned to Nagano and joined the prefectural police force, where climbed the ladder over the years and eventually became an Inspector. He once abandoned his job briefly in an attempt to save Yamato (who had been left to die in an avalanche),[1] and while Yamato was eventually safe, Morofushi was demoted and sent to work at a local police station.[1]

Morofushi is generally shown to be calm and well-mannered, in contrast to the quick-tempered Yamato. According to Yamato, Morofushi tends to ignore others completely while investigating a case, and sometimes even goes out of his jurisdiction. If he has to, Morofushi will put his life on the line.

Morofushi is highly skilled at the art of deduction, unlike many of the other police characters in Detective Conan. He also knows a lot about the Three Kingdoms era (an era in Chinese history lasting from 220 CE to 280 CE), and frequently quotes two of the most prominent military strategists of that era, namely Zhuge Liang (诸葛亮) and Zhou Yu (周瑜).

Morofushi is the first to realize that by looking at red things for a long time and then looking at something white, one sees green in the afterimage (this dying message thus implies the Italian flag, a vital clue to uncovering the culprit). While he texts Yamato "the late Kōmei" as a hint, he is abused by the culprit, who smacks Morofushi's head and renders him unconscious. The culprit later sets the house on fire to kill Morofushi, but he is able to escape before the whole house is engulfed by flames.

Later on, together with Conan and Yamato, Morofushi devises a scheme to trick the culprit to that the police can arrest him with ease.

It is revealed that Morofushi has managed to get back to the prefectural police force.

Morofushi arrives at the Tokyo Metropolitan Police Headquarters to retrieve an envelope addressed to him, and stumbles upon a case involving Kaitou Kid after meeting Jirokichi Suzuki. While talking on the phone with Yamato, Yui Uehara mentions that he had a younger brother who had moved to Tokyo after their parents' deaths and working in MPD. Morofushi replies that he has not been in touch with his younger brother, and thus does not know where he is or what he is doing.

After seeing through Kid's tricks and "solving" the case, he meets up with Sato and Takagi, who hands him the envelope. Inside, Morofushi finds a phone with a huge hole on the screen and the letter "H" written on the back. Morofushi thus realizes that it is his brother Hiromitsu's phone, and conjectures that he has been working for the Public Security Bureau and died while carrying out some undercover mission. The number "0" is on the back of the envelope, which reminds Morofushi of the time when Hiromitsu called him and told him excitedly that he had made a friend nicknamed "Zero" in Tokyo.

Morofushi, along with Yamato and Uehara, investigates the video footage of the crime scene shot by Kogoro. He sees Amuro in the video and realizes that he has met him before. After thinking for a while, Morofushi recalls that when he was studying in Tokyo, he met up with Hiromitsu, who took "Zero" with him and told him that they were good friends and that both aspired to be a police officer. Morofushi thus suspects that the envelope was sent by Amuro. Shortly after this, his former boss, Kuroda, talks to him in private; the conversation is not revealed to us readers, but it can be deduced from his subsequent behavior that Morofushi is instructed by Kuroda to pretend to not know Amuro.

After finally arriving at the crime scene, Morofushi greets Kogoro only and asks him who Amuro and Wakita are (Kogoro replies that they are his apprentices). As Yamato yells at him, telling him enter the church and start doing work, Morofushi goes past Amuro and says "every moment is precious and not a moment should be wasted." with the inner monologue "time is money, as the saying goes."

Taka'aki and Hiromitsu Morofushi are siblings. After their parents' death, Hiromitsu was taken in by relatives in Tokyo and was separated from Taka'aki, but they still kept a good relationship. Their contact was forced to stop when Hiromitsu quitted the Tokyo MPD and "took on another assignment" (i.e. began working for the PSB). Afterwards, Hiromitsu became an undercover and died during his mission, but Taka'aki was not aware of this until he retrieves Hiromitsu's broken phone four years later and infers from the phone the fate of his younger brother.

The rivalry between Yamato and Morofushi is mostly friendly, in which they see who can solve a case first. The two are also friends, and although they sometimes clash (with Yamato being quite rude to Morofushi), the overall relationship is not affected, and they keep working closely.

Morofushi is grateful that Yamato has introduced him to Conan, as he realizes after the Red Wall Case that Conan is highly intelligent.[1] He even believes, and confides this to Yamato, that if it were not for Conan's observations, they would have never even come close to solving the case.[1] He even compares Conan to a young version of Zhuge Liang.[1] 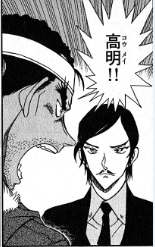 Morofushi's name has a lot to do with Zhuge Liang (诸葛亮), a prominent Chinese military strategist living in the Three Kingdoms era. The courtesy name of Zhuge Liang is "孔明", which is pronounced as "Kōmei" in Japanese. Morofushi's given name "高明" is also pronounced in this way with the on'yomi reading, or the Sino-Japanese reading ("Taka'aki", on the other hand, is the kun'yomi reading, or native reading, of "高明"). Furthermore, the on'yomi reading of Morofushi ("Shofuku") is somewhat similar to the Japanese pronunciation of the Chinese surname 诸葛 ("Shokatsu").