The Clenched Scissors and the Clipped Letters

The culprit is Kazunori Senba.

Since the dying message was "P T O N", the answer to it must contain all of the missing letters of "U MASCARA"
PUT ON MASCARA - P T ON = U MASCARA
U MASCARA - ASACA (for "Asaka" in English) = U M R
Which can be rearranged to make RUM
making the answer "ASACA RUM"

Conan believes that the bodyguard Asaka was the black organization member Rum. The website with the information about the murder has been taken down. Then Kogoro gets a phone call from a TV-producer who invites Kogoro to a talk-show with the Soul Detective Gaito Hotta, who claims that he is going to solve the Koji Haneda murders by calling Koji Haneda's spirit. Conan joins along with an excuse of wanting to eat in the restaurant in the hotel, where a meeting with Hotta is going to take place.

File 952 - In the Suspicious Next Room

File 953 - As If Connecting with a Demon in the Darkness 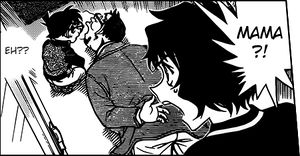 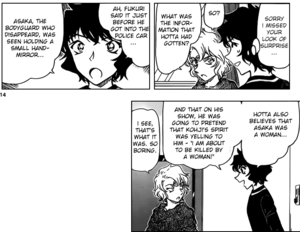 The clue about Asaka

The culprit is Sanpei Kokuri. The motive was that Hotta used his late sister's corpse for his show. A few years ago Kokuri's sister committed suicide in the mountains due to a break-up. But her body was never found. Later Hotta was making a show in the mountain (most likely in connection with a missing person case, that Conan and Kogoro discussed in the taxi) and 'found' the body claiming to have 'felt' it's spirit. Kokuri realized that Hotta must have found his sister's body a long time ago, but instead of reporting it to the police, he had buried it to use it in his show. So he killed Hotta in revenge for having humiliating her.

Masumi calls Mary "Mama", indicating that she is her mother.

The only information that the victim had was that he believed Asaka to be a woman. He was going to pretend that he had summoned Kohji's spirit and have it say that a woman was going to kill him. The culprit said that someone saw Asaka holding "that small mirror". Mary consider that detail as 'boring'. Mary is not willing to trust Conan, stating that he isn't the same boy they met, and she orders Masumi to switch hotel.

Conan considers that if Asaka is Rum, then perhaps what Haibara said about being feminine refers to looking girly on the outside but strong like a man on the inside. If Rum had been a bodyguard 17 years ago, then they must be old now. Conan also ponders the possibility that Mary is Rum after having shrunken, being girly yet strong and older than she looks. 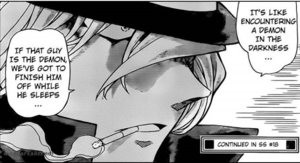 Gin suggests Kogoro to be finished off

Later, Gin and Vodka discuss about the murder case and The Case of Kohji Haneda. Gin comments that Rum screwed up in that case, in fact Gin is intrigued that Kogoro went to investigate the murder case and stick his nose in the Organisation's matter. Gin says " It's like encountering a demon in the darkness, if that guy is the demon we should finish him off while he sleeps".

File 954 - Sanction of the Betrayal

File 955 - Whereabouts of the Betrayal

Curse of the Nue

File 958 - The Monster of Yadori Village

Heiji is invited to a village in Shizuoka Prefecture to investigate rumors of Tokugawa-era golden treasure buried there. Ran, Conan, and Kazuha tag along. They hear about the death of a local man named Charles Abel, whose last words were "Nue", a creature from Japanese mythology. While staying in a decrepit hotel in the area they hear the "Cry of the Nue" from outside.

File 959 - The Night in which the Nue Screams 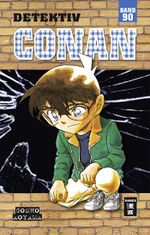 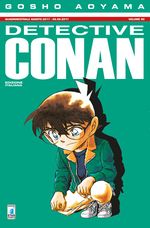 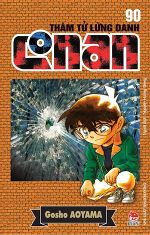