Difference between revisions of "Hiroshi Agasa"

Hiroshi Agasa (阿笠 博士 ,Agasa Hiroshi?), most commonly referred to as Professor Agasa (阿笠博士 ,Agasa-hakase?), and known in the Funimation dub as Hershel Agasa, is a character in the manga and anime franchise Detective Conan. Agasa is Shinichi Kudo's next door neighbor and family friend. The first person to learn that Conan Edogawa is actually Shinichi, he invented all of Conan's special gadgets as well as the Detective Boys' badges and flashlight-watches.

Hiroshi Agasa is an inventor and Shinichi's next-door neighbor. He makes his living with a wide number of patents and inventions, including video games (of which the Detective Boys are enthusiastic test players). While many of his inventions are useless or have even damaged his in-house research laboratory, Agasa has been successful enough to live in a large house and even rebuild it when necessary. He has been a friend of Shinichi and Ran since their childhood years.

After Shinichi was shrunk by the APTX 4869, the first person he met and entrusted himself to was Agasa. After having been convinced that the little boy was Shinichi, Agasa was also the first one to advise Shinichi to exercise caution in his pursuit of the Black Organization. He also helped Shinichi in establishing his new identity as Conan Edogawa, including constructing several gadgets which help Shinichi in carrying on his detective work surreptitiously. In order to perfect Conan's cover, he also enrolled him in Teitan Elementary and thus came to know the children who would form the Detective Boys. When Shiho Miyano fled the clutches of the Black Organization, she fled to Shinichi's house but collapsed from exhaustion near Agasa's doorstep. Agasa subsequently took her in, learned about her true identity and helped her establish her new identity as Ai Haibara. He also entrusted Shinichi's parents with the secret about what has happened to their son.

Ever since these beginnings, Agasa has been an invaluable friend for Shinichi and the Detective Boys as a confidant, paternal friend, and someone to hang out with. He often takes the children on trips, most of which turn into criminal cases instead.

Agasa went to Teitan Elementary[4] and then Okuho middle school.[5] He met Fusae Kinoshita during sixth grade, though she moved away during the fall term and his family moved from Tokyo to the countryside soon after the term ended.[6]

Agasa has a rich accountant uncle named Kurisuke Agasa who died 50 years before the present timeline at the age of 38.[7] The uncle liked gadgets. Kurisuke's sister, Teiko, was alive until a year ago when she passed away at age 76.[8] Agasa’s cousin’s granddaughter is of the right age to be introduced to Takagi.[9]

Hiroshi Agasa is a jovial, caring and outgoing person and has many friends in his community, a fact which helped him in his covering up of Conan's and Haibara's true origins (he simply claims that they are the children of his friends and acquaintances). Agasa is highly intelligent, having achieved at least one advanced degree and managing to invent a slew of useful gadgets. He is especially proud of his inventions, and their quality must have been recognized, since they have already been used during official events[10]. While a bachelor, he is very paternal and enjoys the company of the Detective Boys. Agasa has a special love for pasta and tomato juice.

Agasa is an average size man with slightly-overweight frame. Looking somewhat older than his actual age, he is bald on the top of his head with the rest of his hair silver. He sports thick eyebrows and a mustache and a somewhat bulbous nose. He wears round glasses and is regularly seen in his lab attire

Shinichi Kudo confides in Agasa the secret that he has been shrunken. Shinichi takes the name Conan Edogawa and goes to live with Ran Mouri.

Agasa uses the Voice-Changing Bowtie in order to help Conan protect his secret identity from Ran.

Agasa aids Yusaku Kudo and Yukiko Kudo in playing a prank on Conan to prove to him how dangerous of a situation he is in.

Agasa signed himself and a friend up for a mystery tour, but the friend's daughter becomes sick, so he sends Conan, Ran, and Kogoro Mouri in his place

Conan, after realizing that Baigar, chinese alcohol, has some effect on his shrinking, gets Agasa to buy him more, but they learn he has built a tolerance.

Invents: Voive-Changing pen, Anime version: Kamen Yaiba Voice Changer
Agasa takes the Detective Boys to his uncles house to uncover a treasure he had hidden, however they discover a second code that leads to a hidden attic.

At Conan's request, Agasa looks through Yusaku's files to find information about a phantom thief from 18 years ago. He discovers that a "young novelist" had played around with the thief's title "1412" and ended up naming the thief "Kid". Conan spends the rest of the case trying to stop Kid from stealing the Suzuki family's Black Star gem.

A mysterious new student, Ai Haibara, at Conan's school reveals her self to be an agent of the Black Organization, Sherry (Shiho Miyano). She also claims to have sent Dr. Agasa to the next world. Conan races to Agasa's house to find him alive and distracted. It is then revealed that Haibara escaped from the Organization in by taking the Shrinking drug APTX and ran to Shinichi's house for protection, where Agasa found her and took her in. From this point forward she lives at Agasa's house.

Conan and Haibara encounter Gin's car on the street and plan a tracker. Conan, Haibara and Agasa follow the signal. Conan and Haibara find themselves at a funeral party where a murder occurs. During the process of solving the case, Haibara is kidnapped by a member of the Black Organization!

Agasa takes the Detective Boys on another camping trip. Conan, Ayumi, Genta, and Mitsuhiko wander off and end up exploring a cave where they witness some people disposing of a body. Conan ends up getting shot! Later, Agasa and Haibara end up realizing that the others are missing and contact the police.

Agasa and the Detective Boys board a bus and it is soon hijacked! Not only that, but Haibara senses that a member of the Black Organization is on board.

Agasa and the Detective Boys meet a strange tourist called James Black who gets kidnapped. At the same time Haibara and Conan notice they are being tailed by one of the men from the Bus Hijacking case.

Agasa calls Heiji Hattori in to help Conan. They begin to discuss all of the plot points so far. While Conan and Heiji go to investigate Jodie Saintemillion, Conan asks Agasa to search the internet for information concerning Chris Vineyard whom he suspects may be a member of the Black Organization.

Agasa reports to Conan on the information he discovered on Chris Vineyard. It turns out that the first time she stepped out into the public's eye was the day of her mother's, Sharon Vineyard, funeral. However, Agasa could not find much about the relationship between the mother and daughter.

Mitsuhiko disappears and it's up to Agasa and the Detective Boys to track him down. They trace his steps all the way to a forest in the mountains. There the bump into Detective Yamamura, who tells them that a serial killer, Ki'ichiro Numabuchi, is on the loose in the forest as well! As it turns out, Haibara may know something about this serial killer!

Invents: Anywhere Ball Dispensing Belt
Conan has obtained the digital diary of Suguru Itakura, someone who is connected to the Black Organization. He brings this digital diary to Agasa's place and discovers hidden text between entries. These hidden entries explain the interactions between Itakura and Tequila as well as a mystery woman who only spoke over the phone. They then discover that Itakura was planning to deliver a program to the Black Organization that week and decide to travel to Itakura's cabin to complete the transaction.

Agasa and the Detective Boys go on another camping trip. Conan questions Agasa more about the Itakura incident and whether or not he knew Atsushi Miyano, Haibara's father's name which he had recently just learned. Agasa reveals that he did know Dr. Miyano and his wife Elena Miyano who makes up the English side of Haibara's ethnicity.

Agasa has a birthday.

Conan narrates Shinichi and Ran's adventure from ten years before the present story-line to the Detective Boys and Sumiko Kobayashi. Agasa had played a vital part in that adventure, driving Shinichi and Ran to the indicated places and helping them decipher the codes.

Agasa boasts about his invitation.

Conan treats Agasa like an uncle. Due to the fact that they both share the secret behind Shinichi's transformation and knowledge about the Black Organization, Conan often comes to him when in trouble or seeking for help.

The relationship between Haibara and Professor Agasa is rather unusual, if not humorous. Despite what their actual (and apparent) ages are, Haibara often times acts more like a mother to the professor, constantly reminding him to watch what he eats. On several occasions, she has removed fattening foods from his reach[21], and is attempting to help get him into better shape. There have also been instances where she'll instinctively step in front of Agasa to protect him from danger.[22] Out of all the people she's met, Haibara seems most comfortable about acting herself with Agasa; which might be attributed to the fact that he was the one who found her after she escaped the Black Organization, and took her in.

Though they only realized the fact some time later, Agasa knew her parents when they were still alive—especially her father, Atsushi Miyano—even though he didn't know at that time that they'd had children.[23][24]

Agasa and Yusaku are good friends. 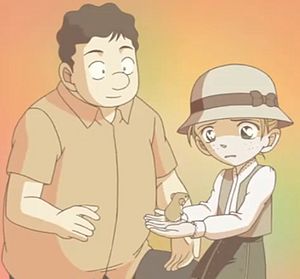 Fusae Campbell, today a successful fashion designer, was Agasa's first love in their childhood years. Because of her half-American heritage she has blonde hair, which made her the target of ridicule among her fellow students and thus very shy; she usually wore a large hat to conceal her hair. Three months after meeting Agasa, her family abruptly moved away, but she promised to return every ten years to a special place to meet him again. However, Agasa could not figure out what location she meant, until the Detective Boys and Conan find the original note she left behind and help him realize the answer to her clues. While they did not openly talk about their feelings during their brief reunion, there is a hint that their relationship is now beginning to grow.

In the non-canon movies, Agasa usually gives a multiple-choice quiz to the Detective Boys as a reward or just to test their knowledge. These are mostly based on puns or rearranging the strokes in a character to get the answer.

Agasa's name comes from mystery writer Agatha Christie. His first name Hiroshi is a pun as it is written with the same kanji for hakase (博士 ,professor?). Agasa's English given name "Herschel" likely comes from the physician friend of V. I. Warshawski, Dr. Charlotte “Lotty” Herschel.