After ruling out the brutish man Conan knows went to the dining car, the briefcase was full of underwear, Conan realizes one of the passengers he spoke to said something strange.

The woman claims to have had a great view of Mt. Fuji earlier in the train ride, but it would be impossible to see Mt. Fuji from her window in the Green Car. She must have been in the dining car at the time and mistook her view from the dining car for the one back in her Green Car seat.

The woman lied about going to the dining car in order to cover up the transaction she had with the men in black.

Conan also realizes that the detonation button the Gin lookalike referred to is when the woman dials a specific telephone number on her cell phone.

The woman manages to dial the number on her cell phone at 3:10 PM, but thankfully Conan manages to use the Power-Enhancing Kick Shoes to kick the briefcase out of the train just before it exploded.

The woman's motive for making a deal with the men in black was to gain "inside information on the trading market" in exchange for 100 million yen.

The men in black's motive for planting the bomb of course was to kill off the woman and cover their tracks while getting away with a hefty amount of money.

A remastered version of this case was aired on December 3, 2016. 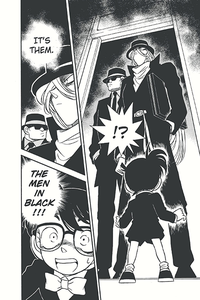 Conan meets Gin and Vodka.
Main article: List of differences between the manga and anime