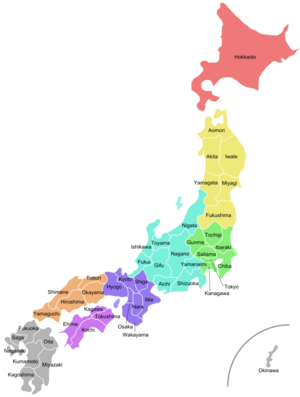 This is an incomplete list of the Prefectures of Japan that were featured in the stories of Gosho Aoyama.

Gunma Prefecture (群馬県 ,Gunma-ken?) is located in the Kantō region of Japan. 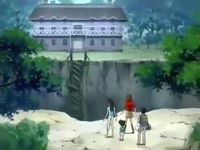 Sonoko Suzuki's family owns a villa in those woods that is surrounded by forest. It is only accessible by a very old foot bridge that tends to collapse alot. The villa appeared as the central location in episode 34-35 and made a brief cameo in episode 446-447.

Nagano Prefecture (長野県 ,Nagano-ken?) is located in the Chūbu region of Japan.

Osaka Prefecture (大阪府 ,Ōsaka-fu?) is located in the Kansai region of Japan and is the home to Heiji Hattori, Kazuha Toyama, and the Osaka Police Department. It's not to be confused with its capital, Osaka City.

It appeared in Tenkaichi Festival Case and it's in the the Saitama Prefecture.

It appeared in Tenkaichi Festival Case.

As the Tokyo Metropolis (東京都 ,Tōkyō-to?) with a population of 13,960,236 (2021), the City of Tokyo doubles as it's own prefecture, encompassing the core city of 23 specials wards, as well as 26 additional cities, 5 towns and 8 villages to the west of it, which are known as the Tama Area (多摩地域 ,Tama-chiiki?), also referred to as Western Tokyo, extending it to a border it shares with the Yamanashi Prefecture. This is the metropolitan area often abbreviated as Tohto (東都 ,Tōto?) in Gosho Aoyama's works and what is often referred to as simply by "Tokyo" in daily use.

Tottori Prefecture (鳥取県 ,Tottori-ken?) is located in the Chūgoku region of Japan. Misao mentioned his paternal grandmother Misae lives in Kurayoshi. Officer Chosuke Takagi was transferred to Tottori to tackle a crime ring. Its capital is the city of the same name which was involved in Tottori Sand Dunes Mystery Tour as well as the nearby city of Kurayoshi. It's also the real life home prefecture of Gosho Aoyama.

Yamagata Prefecture (山形県 ,Yamagata ken?) is in the north of Japan, being part of the Tōhoku region. Heiji Hattori vs. Shinichi Kudo: Deduction Battle on the Ski Slope! and the anime original The Case of the Furisode at the Hidden Hot Spring on a Snowy Night (episodes 379-380) are set there, the latter in a hot springs resort located in this prefecture, the Kotoya Inn. Akemi Miyano claimed for it to be her home prefecture when she disguised as Masami Hirota and Jirokichi Suzuki's residence is modeled after two real adjacent universities in the region. It's also the real life birthplace of Gosho Aoyama's mentor and assistant Yutaka Abe, as well as that of screenplay writer Yukiko Okazaki.

Yamanashi Prefecture (山梨県 ,Yamanashi ken?) is located in the Chūbu region of Japan. The prefecture is landlocked, featuring a fertile central valley, surrounded by many of the highest mountains in Japan.

This is where Shukichi Haneda claimed his 7th title in a shogi match.