Kaitou Kid first appeared 18 years ago in Paris, a herald to the quiet retirement of the master thief, Phantom Lady.[5]

Toichi Kuroba (黒羽 盗一 ,Kuroba Tōichi?) was secretly the original Kaitou Kid. Toichi as Kid was the greatest jewel thief in Japan as well as a world-renowned stage magician until he was murdered in a fake magic accident. Sometime prior to his death, Toichi had his attendant and friend Konosuke Jii promise him that he would never tell Kaito about his thieving.[6] A thief herself, his wife Chikage Kuroba was well aware of his double life, having witnessed the inception of Kaitou Kid.[5] Toichi ceased to be Kaitou Kid only upon his death in a fake magic accident arranged by a mysterious rival group.

Kaito Kuroba (黒羽 快斗 ,Kuroba Kaito?) is the current Kaitou Kid. Kaito is a second-year student at Ekoda High School Class 2-B alongside his childhood friend Aoko Nakamori, the witch Akako Koizumi, and transfer student detective Saguru Hakuba. Kaito discovers his father's identity as the original Kaitou Kid after eight years following his death thanks to a secret room inside his house as well as talking with his father's attendant and friend, Konosuke Jii. Wanting to pick up where Jii left off, Kaito continues to be Kaitou Kid in an effort to lure out his father's murderers by making Kid a world-famous thief once again. It isn't until the Blue Birthday heist that the murderers appear and reveal that they are searching for the doublet red-colored gem Pandora, said to shed tears of immortality during the passing of a particular comet. Upon realizing the organization's aim and that his father was killed for his refusal to aid them in retrieving Pandora, Kaito vows as Kaitou Kid to find the Pandora gem first and shatter it into pieces.[7] Kaito's mother is aware that Kaito discovered Toichi's secret room and has taken up the mantle of Kaitou Kid.[6]

In both civilian and costumed life, Kaitou Kid is a compulsive magician who is drawn to any challenge just for the sheer thrill of overcoming all hazards in the end. Kid is infamous for having a rather overconfident (close to the point of arrogance) attitude, always preferring to create as big a bang as possible. He loves nothing more than leading the police in wild goose chases, letting them get within a hair's breadth of catching him, before exiting one way or another. Seemingly having a soft-spot for his fans, there has been more than one occasion when Kid has refused to show when the police tried to bar the general public from witnessing his act. Generally, when these instances occur, one of Kid's tricks rely, one way or another, on his ability to blend in with a crowd. 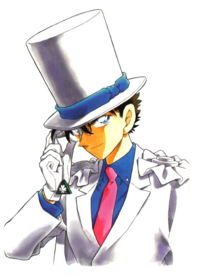 At several instances, it has been demonstrated that Kid shares a close natural likeness with Shinichi Kudo.[35] This, on occasion (particularly in the non-canon appearances), allows him to pass himself off as Shinichi whenever needed, without requiring a special disguise.[36][37][38][39]

Kaitou Kid was originally known as "Kaitou 1412" ("kaitou" meaning "phantom thief" in Japanese"), but the exact origin of that name is unknown. According to what Sonoko told Ran, the "1412" part is rumored to come from the secret number that may have been given to him by an international organization like the FBI, the CIA, or Interpol. The information about the number was supposedly leaked to the media, leading to that number being used to describe the thief.[66]

Sometime later, a reporter scribbled the number 1412, referencing the thief, in a hastily-written note. This note was seen by Yusaku Kudo, who misread the numbers as "KID." Thus, Yusaku was the one who invented the name Kaitou Kid. [67]