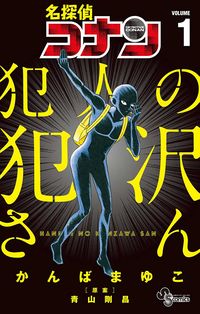 Hanzawa-san the Criminal (犯人の犯沢さん ,Hannin no Hanzawa-san?) is a spinoff manga to Detective Conan, featuring the black-silhouetted "criminal" that appears in Detective Conan chapters to represent the mystery culprits, written and drawn by Mayuko Kanba. It is being serialized in Shogakukan's Weekly Shōnen Sunday S starting May 2017, first Volume released in December 18, 2017.

The story features Hanzawa-san, who goes to Beika for a purpose--to kill a certain man. However, things are not as easy as they have planned.

On October 4, 2021, as a part of Detective Conan Volume 100 project, an anime adaptation of Hanzawa the Criminal has been announced. It is animated by TMS Entertainment and will be aired in 10 minutes frame on:

On November 9, 2021, Netflix announced that they will distribute the anime worldwide. Netflix Japan start streaming the anime on October 4, 2022.