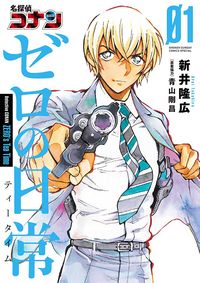 Zero's Tea Time (ゼロの ,Zero no Tī Taimu?), is a spinoff manga to Detective Conan, featuring the three face man Tooru Amuro, written and drawn by Takahiro Arai under the supervision of Gosho Aoyama. It was serialized in Shogakukan's Weekly Shōnen Sunday starting May 9, 2018 and ended May 25, 2022, first volume released on August 8, 2018.

This spinoff features Rei Furuya, also known as Tooru Amuro and Bourbon, daily life. Each chapter features one of his three faces, the private detective and Café Poirot waiter, the Black Organization operative, and the NPA officer.

Chapters not yet published in volume format

On October 4, 2021, as a part of Detective Conan Volume 100 project, an anime adaptation of Zero's Tea Time has been announced. It is animated by TMS Entertainment and was aired in 15 minutes frame on:

On November 9, 2021, Netflix announced that they will distribute the anime worldwide. Netflix Japan start streaming the anime on April 5, 2022, while worldwide release on July 29, 2022.