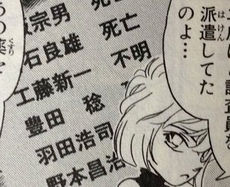 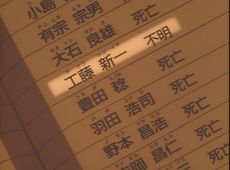 The anime adds a few extra kanji to the names, with furigana, that are not present on future versions of the list. In the anime, the names are ??? Kojima, Muneo Arimune, Yoshio Ōishi, Shinichi Kudo, Minoru Toyoda, Kohji Hada, Masahiro Nomoto, Masahito Yoshioka, and Konzō ???.[5]