Juzo Megure (目暮 十三 ,Megure Jūzō?) (also known as Joseph Meguire in the Funimation dub), commonly referred to as Inspector Megure, is a Police Inspector (Rank 6) in Division 1 of the Tokyo Metropolitan Police Department[1] in the manga and anime Detective Conan.

Shortly after Megure had come to the police force, he was involved in a case in which he would meet his future wife, Midori. As a result of the case, he has taken to wearing a hat in public in order to hide a scar which he gained and his own self-consciousness about how he came to his marriage.[2] Megure was also a good friend of star detective story novelist Yusaku Kudo, and would in the past consult him about one case or another. On many such occasions, Yusaku would take his son Shinichi with him, who would pick up his father's investigative skills and eventually become a detective in his own right.[3]

Megure is almost always there on the scene when a murder occurs, always interviewing the suspects, and acting as the commanding officer of the group of police he brings along with him, among them Wataru Takagi, Miwako Sato, Ninzaburo Shiratori, and Kazunobu Chiba. Megure and Kogoro Mouri were former co-officers in the district.[4]

Megure is a capable veteran officer who cares much for his underlings, but he is prone to occasional shouting fits whenever something does not go right or when his temper gets the better of him. He also has little patience for fools, but tends to be a bit too conservative, limiting his ability for flexible thinking.

After Shinichi solved their first mutual case for him, he has regularly consulted him in difficult cases and considered him a great help.[5] In stark contrast to this, he tends not to think much of Conan and the Detective Boys, usually thinking of them as a nuisance until they solve the ongoing case for him. Likewise, from their common police days, he has no high regard for Kogoro, and he thinks that he may actually be under some kind of jinx, since wherever Kogoro[6]shows up, there is always some murder case nearby (a fact which actually conforms to Conan, which in later cases[7][8] he seems to have realised).

In some anime originals, Megure has the habit of trying to tell the culprit about the morals of doing wrong, which he rarely does in the manga series. Megure also likes to look good in front of TV and interviewing which he makes himself look neat. He is not really able at talking English, for example instead of policeman he said poriceman wrongly, and has a hard time using computers and any modern technological device.

Megure has a strong sense of justice and a strong tolerance for pain like when been hit with a iron club on head and been stabbed in stomach with knife.

Megure in his regular trench coat and hat suit.

Megure appears in a majority of the episodes. He is always involved in questioning suspects, although his deductive powers are not as well-developed as Shinichi or Heiji.

Midori is Megure's wife. During a case a long time ago, she insisted on being a decoy for a serial killer. This is explained in episode 217-218. Juzo jumped in front of the car to save her. While she was hit, he only hit his head. This is explained why he never takes off his hat, which is to hide the scar. She survived and later they were married. She would always make a bento lunchbox for him.

Megure is on very friendly terms with Yusaku and respects his deductive powers, so much so that he sometimes looks to him for guidance on tough cases.

Shinichi Kudo is respected and seen as a helpful guide on cases by Megure. Their working relationship began with Shinichi's first solo case aboard an airplane. Shinichi's habit of helping the police likely comes from his father, Yusaku Kudo, whom Megure also respects. Megure often comments how cases would be much easier if "Kudo-kun" was still around. Conan often pretends that Shinichi tells him the truth to cases by phone so that Megure is more accepting of Conan's deductions. 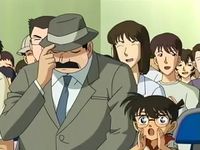 Megure tends to treat Conan as a nuisance, and does not think much of him. Unlike Takagi and Sato, he does not notice as much as others the tips and hints Conan drops regularly.

Kogoro Mouri and Megure used to work together in the past before Kogoro left the police force. Megure found Kogoro's work behavior and poor deductions irritating. Now that Kogoro has become the "Sleeping Kogoro", Megure's respect for him has increased somewhat. It is a running gag that Megure refers to Kogoro as a shinigami or a 'death-god', because of the sheer number of murder cases that Kogoro coincidentally has come by. Now whenever Kogoro and Megure work together, the inspector always impatiently awaits Kogoro's characteristic "Hynaaa~" sound and dance that marks the beginning of the sleeping detective's deduction.

Megure and Takagi usually work together on criminal cases. Ninzaburo Shiratori, though an Inspector himself, is also frequently seen conducting investigations with Megure. Both policemen share cordial relationships with Megure and treat him with respect. He can be strict with them, but he also shows concern for them, if they are put in danger.

Miwako and Juzo have been shown to have a father-daughter relationship, probably because Sato's father had died at a young age.

Superintendent Matsumoto is Megure's superior. He has great respect for him.

eBookJapan held a character popularity poll from April 12, 2011 to May 12, 2011 in which readers of Detective Conan (international included) could vote for their favorite character. Megure placed 24th in the poll with 17 votes out of the 5,883 that were cast.[27]

Maigret was featured by Gosho Aoyama in the fifth volume.

"Juzo Megure" comes from Jules Maigret, a fictional Paris police detective created by the writer Georges Simenon. Maigret and Megure physically resemble one another as well, both are stocky and somewhat overweight. Megure's first name "Juzo" has also been used as a pun on thirteen, the Japanese numeral.