The Hang Glider Cape is one of the many gadgets used by Kaito Kuroba during his heists as the Kaitou Kid. 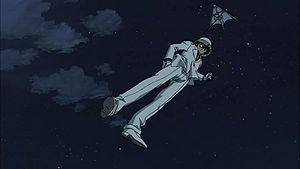 Kid escapes from Conan in Magician of the Silver Sky.

The cape of Kid's outfit doubles as a getaway hang glider. When used as the hang glider the cape remains attached to Kid's outfit by a belt Kid wears around his waist. During Kid's first appearance in Detective Conan Kid is shown pressing a button on a controller that instantly sets up the cape to be used as the hang glider. In Magician of the Silver Sky Kid detaches the cape from his outfit by removing the belt around his waist and the cape is revealed to be attached to the controller Kid has by thin wire. Pressing a button on the controller pulled Kid back up to the cape enabling him to escape from Conan. Because the movies are non-canon it is unclear whether the Hang Glider Cape has this ability in the main plot of Magic Kaito or Detective Conan.