While traveling home on the Shinkansen from Osaka, Conan, Ran, and Kogoro ran into Officers Sato and Takagi, who were transporting a criminal. Later, a bomb was found on the train which Officer Sato went to investigate. At that time, while she was in the bathroom with it, Officer Takagi had to take the criminal to the bathroom. And then, he apparently committed suicide but...

Show spoilers »
Conan points out the suspects of who the murderer is. After investigating and finding clues, Conan reveals the culprit to be Akira Akashi for the following reasons.

Akashi tries to escape, but is apprehended by Takagi.

Akashi is member of the same drug dealer group as Ogura and wanted to silence him before he could be interrogated, which will lead to the group's downfall. Nevertheless, thanks to Akashi's confession, the police successfully raid the group's hideout and arrest all of the members. Because of this success, Takagi and Sato's punishment is reduced to a salary cut instead of being demoted/fired.

At the beginning of the episode, Conan is talking to Ran through his Earring Cellphone posing as Shinichi however, he is doing it without using his Voice-Changing Bowtie so he should have Conan voice and not Shinichi's one. 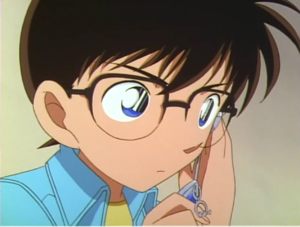 For the full gallery see: The Shinkansen Transport Case/Gallery